CITY OF BOHANE by Kevin Barry 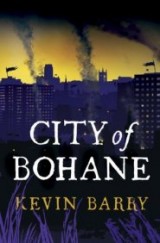 In Kevin Barry's new novel City of Bohane (Graywolf Press), it is easy to be swept under by the sheer inventiveness of his writing and the deeply imagined shape of the world he's created. Bohane, a fictional town surrounded by the Big Nothing on the coast of Ireland, is a city divided – between the Back Trace, controlled by a well-dressed organization called the Fancy, and the North Rises, housing towers each ruled by their own gang-like family. Over a period of ten months the novel traces the fall of the Fancy's boss, the immaculate albino Logan Hartnett, as he navigates the return of his nemesis Gant Broderick and the growing gulf stretching between him and his wife, Macu. Logan is beset from all sides. His ninety-year-old mother, Girly Hartnett, who has not left her hotel room in twenty years, hasn't let her age or her isolation keep her from having a gnarled finger on the city's pulse. Jenni Ching, the daughter of a coffee shop owner, has the ears of Broderick and Logan as well as a growing army of teenage sluts. And trouble is brewing in the Rises, as the families who live there begin to cooperate in an effort to get Logan out. Barry unfolds the machinations and maneuvering of Bohane's power players underneath a patina of richly detailed slang. He lets them loose in a world built so seamlessly that it is easy to imagine that, in 2053, there will be a city just like this, isolated and eccentric. “Whatever's wrong with us is coming in off that river,” the book begins, but “whatever's wrong” might just as well be rolling off the wastes of the Big Nothing, or drifting in from the sand dunes by the sea, where the dreadful sand pikeys keep to themselves, to the city's great relief. Bohane residents are a peculiar, tetchy lot:


“Have a sconce at the gold gaatch of us—the slope-shouldered carry, the belligerence of the stride, the smoky hazel of our eyes; officer material we are not.”

The characters who circle Logan Hartnett are feudal and idiosyncrastic. There's Fucker Burke, whose “routinely Gothical west Ireland childhood” makes him an excellent right-hand man; there's Macu, the cross-eyed beauty who married Logan thirty years earlier, after first having been the lover of Gant Broderick; and there's Gant Broderick himself, back in town after twenty five years with as much love for Macu in his heart as bitter yearning for the city itself. Logan, Broderick, and Macu circle each other over the course of ten long months, jockeying for power. Under all this style, City of Bohane could do with a bit more spirit. Logan Hartnett's yearning for his wife is told rather than shown to be deeply felt. Gant Broderick's motivations are better articulated—his brief courtship of Macu twenty five years earlier, his wanderings in the NB (the Nation Beyond)—have left their mark on him, and his uncertainty at the circumstances of his return to Bohane leave him a sympathetic if not particularly complicated character. Everyone in the book seems held at a distance, especially the narrator, revealed late in the book to be the owner of a very specialized film shop and then hardly heard from again. The book's resolution on the humid and oppressive night of the August Fair suffered from this arms-length lack of buildup, though it provided marvelous imagery. In the end, it's this city, this world, that's so easy to come back to. It's a sinister joy being overwhelmed by the feel of the city, spending time among these “good-looking young people, in a hard town by the sea.” How could you not fall in love? Logan Hartnett has a “mouth of teeth on him like a vandalised graveyard.” Fancy girls walk the early morning streets of the Back Traces “painting on bravery from snap-clasp compacts.” Bohane's proverbs start and end with “The beginning of wisdom is: first you get a roof.” It was a pleasure for a while to walk with Gant Broderick; “to a high vantage and across the bog plain the lights of Bohane city burned – was a Babylon on fire in the October dark.”Kevin Barry was born in Limerick in 1969. His stories have appeared in the New Yorker, the Granta Book of the Irish Short Story, Best European Fiction 2011, and many other journals and anthologies. He also works on plays, screenplays, and graphic stories. He now lives in County Sligo in the west of Ireland.