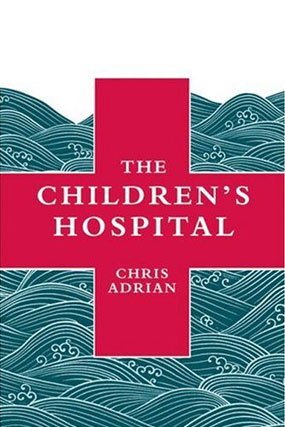 McSweeney's, August 2006
$24.00, 480 pages
If the physical maladies afflicting the patients in Chris Adrian's The Children's Hospital are rare and complex, the spiritual sickness plaguing the hospital's adult population is by comparison commonplace. From Pickie Beecher and his blood-thirsty pica to Ella Thim, whose caudal regression has "Left her blank between the legs...a miraculous horror of [surgical] reconstruction," these children are deformed or half-formed, and often dying, as though their contortions in some way mirror the state of the adults' hollowed souls.

This is the apocalypse, after all. Picture it: a dark and stormy night, the likes of which the world hasn't seen since Noah built the Ark. And suddenly, after a team of doctors whisks the newly born and grossly formed Persian king's daughter, Brenda, from the delivery room to the neonatal ICU, the hospital breaks loose from its moorings. But because of its hermetic design, the structure floats, carrying its denizens-what remains of human civilization-above the seven miles of water that cover the earth.

Narrated by the recording angel of the apocalypse, the events of the flood are part of four interwoven stories that will form three new biblical books: the Book of the King's Daughter, the Book of Calvin, and the Acts of Jemma. The life of medical student Jemma Claflin accounts for two of the overarching narratives: her childhood in Maryland, replete with Catholic school and an alcoholic mother, and her life after the flood, which is marked by her pregnancy and then her development of supernatural healing powers. An unlikely redeemer, Jemma is not particularly religious, and although genial and good spirited, she's by no means the most gifted or devoted medical student present. Jemma's brother Calvin, who committed suicide in high school, tells the third story through (we are led to believe) his rage-filled, book-length suicide note. And the fourth narrative belongs to the recording angel himself, who conveys his concerns and records his actions as he and the other three angels oversee the apocalypse.

The scope of The Children's Hospital is striking: it skips perspective with ease, from the angels in the heavens to the post-apocalyptic hospital community to the suburban scenes from Jemma's childhood. While sprawling, the wide-angle view doesn't preempt the depiction of varied and nuanced characters. Adrian remains attentive to the details of the myriad characters' lives, his physician's training surely an asset in observing and pinning down distinct traits and symptoms. Take, for example, Jemma's observation of a liver transplant patient who is on the brink of death: "Inside the girl, it was very quiet, too, the silent aftermath of a final argument between the girl and the visiting liver, which Jemma understood, as soon as she touched her, she had rejected as utterly as an unsuitable lover."

Adrian's epic novel can be read as a commentary on the spiritual state of contemporary man. Given the most auspicious circumstances, the hospital's residents still recreate a microcosm of the sin-laden world destroyed by the flood, with their attempts to build a utopian community eroded by self-interest, sectarianism, and complacency. And while there's a grand, fantastical element to the story, the narrative is underpinned by tangible truth. As the adults succumb to physical decay and the children grow to fill their roles, it becomes evident that the hospital is a metaphor for the world adrift in the universe, with all of humanity as its stranded passengers.

Chris Adrian is also the author of Gob's Grief. His short fiction has appeared in The Paris Review, Zoetrope, Ploughshares, McSweeney's, The New Yorker, The Best American Short Stories, and Story.

Anne K. Yoder is a freelance writer living in Brooklyn. She is the associate books editor at PopMatters, and moonlights as a pharmacist in the West Village. Her writing has appeared in Tin House, BlackBook, and PopMatters. To contact Anne e-mail: kgbbooks@gmail.com