BRIGHT SHARDS OF SOMEPLACE ELSE: Stories by Monica McFawn 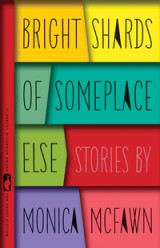 The characters in Monica McFawn's Flannery O'Connor award-winning story collection Bright Shards of Someplace Else (The University of Georgia Press) are only loosely rooted in daily reality. Whether helpless to make the messy details of life conform to their idea of how it should be, or dreamers constantly looking beyond what is visible in search of an ideal, they don't sit comfortably in the world as it is.“Out of the Mouths of Babes” features two very different examples. There is nine-year-old Andy, whose only pleasure comes from posing as an adult over the phone, and then there is his babysitter Grace, only able to get through the hours with liberal helpings from the family's liquor cabinet. Andy's highest desire is to use his understanding of salesmanship to manipulate and coax the voice on the other end into a position of his choosing; Grace's is to escape the consequences of her bitter dispute with her estranged sister. Soon Grace puts Andy to work on her cellphone, reducing her bills, cajoling the local manager of a casino into forgiving a debt, even breaking up with her current boyfriend. He sees each obstacle only as a chance to bend the call center workers to his control, relishing the thornier challenges of navigating complicated personal relationships. Nothing related to his actual identity as a child, as opposed to the personalities he assumes through the mouthpiece, holds his attention. Grace, meanwhile, is only attempting to evade the intruding unpleasantness of where her choices have led. Drunk, with her burdens temporarily removed by Andy's efforts, she floats out of consciousness with the impression that the living room is a boat at sea.Bill, in “Dead Horse Production”, is also reluctant to face things as he finds them. Charged with taking care of his elderly mother and her horse farm, he resents both the fact of her increasing dementia and how helpless he is to take over her former chores in the stable. When a horse dies in the snow during his mother's doctor appointment in town, the fact of its dead body seems absurdly offensive to him, as does the need to now dispose of its carcass. After exhausting the resources of the yellow pages, he turns to his mother's right-hand woman, Fran, an acolyte whose embrace of his mother's horse wisdom seems to cast doubt on Adam's own bond with her. When Fran helps him use a neighbor's backhoe to drop the dead horse into a pre-dug trench prepared for just this eventuality, the body improbably floats over the opening despite not seeming to be caught on any edges. The horse hanging suspended in the air is the distilled manifestation of everything Bill hates about his situation, writ large. His mother was never meant to become a guru of horse knowledge, and gravity certainly was never meant to suspend its laws so flagrantly. While in the end he discovers a hidden ice shelf holding the horse in place, still the experience defeats his pragmatism and forces him to submit to the less straightforward, more unknowable world that his mother created before dementia overcame her.O'Hara in “The Slide Turned on End” is someone who has already crossed the line from the so-called scientific world into a more mystical, artistic one. Originally a biologist, he creates a theory that abstract art in fact is not abstract at all but represents what life is made of, amoeba, mitochondria, viruses. In his vision of so-called ‘microaestheticism', he becomes a full-fledged member of the avant-garde art world, hypothesizing that even viewing art causes the cells of the observer to change their shape and take on the attributes of the painting on display, from wildly colored Kandinsky's to dramatic swoops by Clyfford Still. Not content with either art or science as they are assumed to be, he has constructed an entirely new, improbable framework. It is close in nature to the mathematical proofs that occupy Aaron in “Elegantly, in the Least Number of Steps”. Despite not being a professional mathematician, he spends his free time obsessively attempting to solve a conjecture that has no proof. When Aaron finally reaches what seems to be a breakthrough, it is only after being brutally beaten in the midst of an attempted robbery at his day job, and his mathematical ruminations are mixed with memories of his absent brother. His current situation—badly hurt, needing help, rooted in one particular moment in time—has no meaning for Aaron as he looks beyond it to both his childhood and to the abstract world of numbers. The demands of his specific predicament are less entrancing than the dreams in his head. A kindred spirit in the story “Improvisation” loses his way home walking home after performing in a play with the local community theater. These characters aren't solidly rooted enough to be able to keep hold of the ground beneath them—they see another world, one that has more substance for them despite its fantastical qualities. Then there is the narrator of “Ornament and Crime”, who finds himself becoming a foot soldier in the fanatical war that his aesthete father waged against ugliness. From having no defined taste and a willingness to tolerate a range of forms, his father's death causes a shift: “The world cleaves into beautiful and ugly things; it is just as bad as seeing double or hallucinating." He is no longer free to view objects and styles without judging them, suffering when they offend. The physical world is suddenly an affront and an attack on him. So it is with all of his compatriots in this collection: so-called reality has a cutting edge for them, and is far less reliable than might be assumed. Something de-stabilizing is hidden under the appearance of things in these stories, and it calls irresistibly to McFawn's creations. Monica McFawn lives in Michigan and teaches writing at Grand Valley State University. Her fiction has appeared in the Georgia Review, Gettysburg Review, Web Conjunctions, Missouri Review and others.