Brian Wood's and Riccardo Burchielli's DMZ: ON THE GROUND 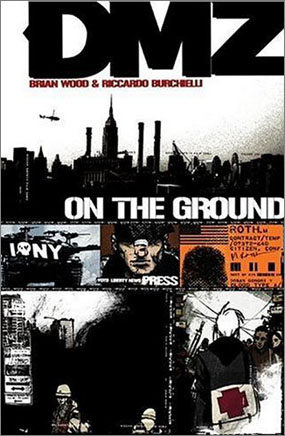 In the first few panels of DMZ: On the Ground, the first collection of Vertigo's ongoing comic book, graffiti states that "Every day is 9/11." However, even if 9/11 has a symbolic significance for DMZ and the world Brian Wood and Riccardo Burchielli have created, the series is not so much a take on the age of terrorism as it is a parable on what makes and breaks America.

Sometime in the very near future, America has erupted into a Second Civil War. In New York City, the U.S. government troops have been pushed back into Long Island while the armies of the Free States control the New Jersey mainland. The reasons for the war as well as the situation in the rest of the country are barely hinted at; the comic focuses on the situation in the Demilitarized Zone between the two armies Ã_Â¿n the island of Manhattan. The story follows Matty Roth, who goes from working as the intern for a news team to being forced to cover the situation in the DMZ by himself, when the rest of the team is killed in an attack.

The visual style is reminiscent of the urban desolation of Black Hawk Down- yellow skies, blasted streets and an overall grungy, dirty feel. Both the writer and the artist pay close attention to keeping the topography of New York City exact and accurate. In one incident, the reader is even provided with a map that displays the route taken by Matty in pursuit of a thief from the East Side to an "enemy" bunker in the Lincoln Tunnel, a journey that also doubles as the reader's rediscovery of a city that's been shell-shocked into the unfamiliar.

The theme of unrecognizable cities seems to be as American as the theme of apocalyptic explosions seems Japanese. One of the most eerie moments of Devil's Advocate is the scene of an empty New York street, while The Day After Tomorrow recasts NYC as a snowy wasteland. In comics we have the flooded subways of the city in The Authority and the reinvention of the New York islands as a pirate haven in the recent East Coast Rising. Comics in today's culture are so hell-bent on exposing the imminence of dystopia, that they shock the reader into seeing it everywhere, by stripping the sense of safety from familiar settings.The only issues, or rather, the only hang-ups I have with DMZ, are side effects of the episodic nature of the serial format. Matty Roth comes across as underdeveloped. The transition from lost rookie to war hardened journalist happens too fast for my taste. Granted, the events in this first volume span a few months which is enough time for Matty's outlook to change. However, because this is the introduction to the character, one would expect to see more of Matty's progression from ignorance to realization. Also, the attempt to cast NYC as a Baghdad in America by including insurgents in the mix is misguided, since this Manhattan is not occupied, simply lawless. The series is more preoccupied with examining what a fictionalized civil conflict can reveal about the current state of the Union than it is with foreign policy. The big ideas hold up though, despite occasional glitches in execution. Towards the end of the collection Matty finally meets soldiers from the Free States Army, and in their brief conversation we get the hint that, predictably, things are not what they seem to be: the enemy may hold a valid point of view, too. Infusing a war story with opposing perspectives is not something new, but the sophistication of the setting and the political background of DMZ's world are intricate enough to imply that this series can go down very interesting paths. DMZ: On the Ground is such a strong and original concept, that even if it abandons its political subtlety, it will remain one of the most thought-provoking comic titles today. Especially in a day and age when American comics (and most of American pop culture) avoid the war like the plague.

Brian Wood graduated from Parsons School of Design in 1997 with a BA in Illustration. He is a graphic designer, traditional and digital illustrator, and fiction writer living in Park Slope, Brooklyn.

Riccardo Burchielli lives in Florence (not the one in Oregon, the original Italian Florence) and is known in Italy for his work in John Doe and Chourmo. DMZ is his first work to be published in the United States.

Yiorgos Kakouris is in hot pursuit of a Journalism degree in NYU. It feels as if he's already paid five times for it already. He would be a practicing magician (all the cool kids do it) except for the fact it's too much work. Besides, he doesn't want weird things to go bump in the night while he's trying.