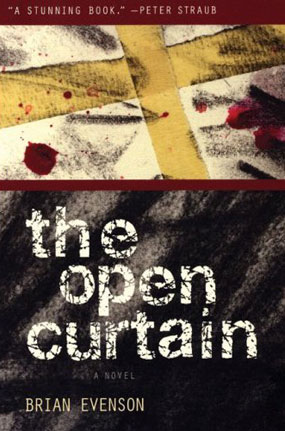 Coffee House Press, October 2006
218 pages, $14.95
Identity is fluid in Brian Evenson's The Open Curtain, a novel that probes into the secrets of Mormonism. Rudd, a Utah teenager, finds an article in a 1902 New York Times that recounts the murder of a tailor's wife, Mrs. Anna Pulitzer. He discovers that the crime is committed by Brigham Young's grandson as part of the alleged Mormon blood atonement ritual performed when a sin is too great to be forgiven.The murder becomes the subject of Rudd's English class research paper and Rudd becomes a player in more than one murder when past and present collide, leaving the reader in a place thrilling for its seeming impossibility.

"Sometimes I am not in my body," Rudd thinks to himself. Moments like these become more extreme as he experiences blackouts or feels that he has exchanged bodies with his half-brother Lael, whose existence is questionable. Strangely, Rudd has little memory of the present-day murder that takes place at a campsite, to which Lael leads him, and which leaves Rudd wounded. Ironically, Lyndi, the daughter of the murdered couple, nurses Rudd back to physical health while his mental health slips. In the aftermath of a suicide attempt, Rudd proposes to Lyndi and she agrees to become his wife. Mormon marriage ritual requires that the bride and groom choose secret names; the suspense builds when we learn that their new names are those of the 1902 murderer and his said accomplice.

The story left me with unanswered questions: Why does Rudd insist that Lyndi choose the name of the accomplice? How much control does Rudd have over his actions, and exactly who is he when he acts violently-is he Rudd or is he the murderer from the past? Even though the 1902 murder is one of the key events in the novel, its presentation breaks the narrative flow. The reader is thrust into a world of historical fact, but is never close enough to Rudd to understand why he becomes so obsessed with the murder.

In the afterward, Evenson writes that the rhythms of Mormon prayers are forever a part of him. This aspect shines through in Rudd's obsession with language. Words and phrases become trapped in his head. These episodes take readers beyond the realm of an action-packed, psychological thriller and into Rudd's subconscious. While a reader looking for an entertaining read might have been satisfied, the novel left me hungry for more moments when I could get to the bottom of Rudd's state of mind and get to know the boy who existed before the murder.

Brian Evenson is the Director of the Literary Arts Program at Brown University. He is the author of six books of fiction, most recently The Wavering Knife (which won the IHG Award for best story collection) and The Brotherhood of Mutilation. He has translated work by Chrstian Gailly, Jean Frá¨mon and Jacques Jouet. He has received an O. Henry Prize as well as an NEA fellowship.

Olena Jennings has translated Ukrainian poetry for publication on the web site poetryinternational.org, publication in Chelsea, and the book-length collection A Chapel for Angels by Oleksiy Koshel, published in Ukraine. She is an MFA student in writing fiction at Columbia University and is working on a novel. To contact Olena e-mail: kgbbarlit@kgbbar.com.
brian_evensons_.