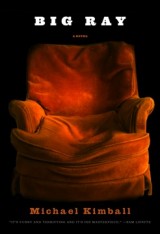 Michael Kimball's new novel, BIG RAY (Bloomsbury), about a man's deceased 500 pound father, is a slim 180 pages of more than 500 short entries ranging in size from a couple of paragraphs to a single sentence. These cosmetic contrasts of size are but one example of the novel's keen self-awareness. While there are many clusters of three or four continuous entries, it would be easy to imagine a hypertext edition (if authors still worked in that medium) of this novel that shuffled the hundreds of passages at random to create new narrative orders, to see what effect it would have on the reading experience. Such an experiment could possibly provide remarkably similar results – as long as it kept in place the last few chapters, where the novel, in another self-conscious move, takes a deep breath and finally gets the heaviest of weights off its chest.Indeed, readers of BIG RAY may feel themselves a part of the story, cast in the role of therapist, intently listening as the narrator, Daniel Todd Carrier, works through his issues with his dead father, Ray Harold Carrier, one thought at a time. Ray wasn't born big, but by the time Daniel became aware of his father, he had become an outsized presence both physically and psychologically. He was also a tragically small man whose only notable success came in domineering over those poor few subjected to being his immediate family: Daniel, his daughter, and the wife who finally divorced him ten years before his death. Ray proves neither worthy of redemption nor a charismatic villain. He starts off bad and only gets worse. He is mostly to be loathed, occasionally to be pitied. In the middle of this extended session on the couch, Daniel makes a brief observation:

My father's life was an ordinary one in so many ways. I wonder if I am making him into something more than he was because he was my father.

This is the heart of the matter, and the answer is both yes and no. Ray was something more than he was to Daniel because he was his father. Family can bring out the best and worst in people, and can be a place where good and bad qualities become exaggerated, primarily in the eyes of the children. Ray's obesity may not have meant much to Ray himself, but it made Daniel feel humiliated as a child, growing up in an era, as he notes, when it was not as common in America as it is now. Obesity is the least of Ray's failings as a parent, but the symbolism is unavoidable. Any novel must be able to stand on its own -- and this one certainly does -- but, for the reason that the author first began writing the story as a memoir, BIG RAY also compels the reader to have a look at its context. Not in regards to which details are based in fact and which details are pure fiction, but for the questions that the whole of it raises about the purpose of story and the expectation of results. Conversely to some of those notorious books of recent years that have embellished the truth or portrayed fiction as fact, whether or not any one particular detail in BIG RAY actually happened wouldn't have the same negative affect on it as fact-turned-into-fiction. The stark contrast that BIG RAY conjures by way of its own existence is how the contents would be received if the cover on the outside said “a memoir” instead. Where does this book stand in terms of the novel as entertainment? Are its powers of empathy, connection, and healing, diminished by being communicated through fiction?Through either lens, BIG RAY's power is unquestionable; its ability to draw out gut-wrenching emotions by way of plainspoken observations is the ace up its sleeve.

When I still lived at home, sometimes I sat in the living room and watched the sleep apnea happen to my father. I liked the part where his chest stopped moving up and down and he seemed to stop breathing. I liked the part where the lack of oxygen woke him up in a kind of shock and he choked and sputtered as he tried to breathe air back into his lungs. Sometimes, my father would look at one of us for some kind of explanation for what was happening to him and that always made him look helpless.

Daniel's unwanted hate for the man he needed to love, and unwanted love for the man who only earned his hate, emulsify into an emotional state hardened for coping; one that offers little reassurance about the past, and no other option but to keep moving on. The first thing we learn about Ray, in the very first line, is that he died in January of 2005, years before the present world of the story. It's pretty clear that Daniel moved past Ray's death long ago, had been anticipating it even. More difficult to gauge is exactly how far Daniel has been able to move past his father's life, or if doing so is ever even possible, for him or anyone. Michael Kimball is the author of four books, including Dear Everybody (which The Believer calls "a curatorial masterpiece") and, most recently, Us (which Time Out Chicago calls "a simply gorgeous and astonishing book"). His work has been on NPR's All Things Considered and in Vice, as well as The Guardian, Bomb, and New York Tyrant. His books have been translated into a dozen languages--including Italian, Spanish, German, Chinese, Korean, and Greek. He is also responsible for Michael Kimball Writes Your Life Story (on a postcard), a couple of documentaries, the 510 Readings, and the conceptual pseudonym Andy Devine.