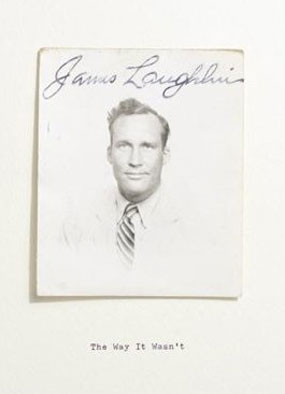 New Directions, November 2006,
288 pages, $45.00
As one of the most charming, itinerant and unorthodox publishers America has known, what better form could the autobiography of James Laughlin take than that of a random sampling from his notebooks? The Way It Wasn't is Laughlin's alphabet, his journal entries on everything from the Alta Lodge (his Utah ski retreat) to Louis Zukofsky. For those of us who salivate at the sight of the colophon of the centaur on the spine of a New Directions book, as a stamp of the keenest literary discretion, this collection is an indispensable combination of reminiscences, observations and anecdotes.

Laughlin is by turns ornery and endearing in his recollections of those who affected and influenced him. While there are several touching entries about his family, The Way It Wasn't is mostly devoted to the writers he knew and published. Whether he's describing a drive through the French countryside with Gertrude Stein, a hike in the Sierras with Kenneth Rexroth or a visit to a Key West brothel with Elizabeth Bishop, the reader discovers that Laughlin's own genius was largely a matter of surrounding himself with the great geniuses of his time.

One gets so dizzy in the company Laughlin kept that it is reassuring to recognize that even a man of such Olympian connections did occasionally miss a train. Of Samuel Beckett, he writes, "A Harvard classmate, John Slocum, had told me to look at Beckett, and gave me Murphy. I didn't think it was so wonderful at the time. I wish I had." Modesty occasionally failed him. In a fragment from a letter to Delmore Schwartz, he refers to "Virgil, to whom my own poetry has so often been compared," and one does a double take before realizing he is in fact talking about the author of the Aeneid.

Another diary entry about Schwartz concerns a manuscript he had sent to Laughlin at Alta, which got lost on its way up the mountain. "Delmore was very agitated. He said that I would have to decide whether I was going to be 'a playboy or a publisher.'" There are some delicious entries regarding his experiences as the former. The most amusing one refers to "Henry Miller's crazy friend Elena, the one that her husband came home early one day from the office and found us together in the shower; he was so sophisticated, or perhaps he was used to her, he just said: 'It is a hot day, isn't it?'"

Towards the end of his life, Laughlin wrote to Brendan Gill, a hallowed New Yorker editor and writer, in an attempt to tap into his literary circle. He asked Gill to use his charms to convince a magazine's poetry editor to accept one of his poems. "Could you take [her] out to lunch at the Algonquin and tell her this is a great poem? Get a receipt and I'll gladly remit. Or if she doesn't want to be seen with you in public, bring her a tall red rose (or a little yellow one, as you think best) for her desk." Of course, Laughlin did not need to rely on tricks and charms to get his work published. If he might not have been Virgil, exactly, his poetry displayed the alert and amusing intelligence that made him a great publisher. Here is 'A Winter's Night', one of his last poems to appear in The New Yorker:

Outside, where the snow
Is softly and soundlessly
Falling (there is no wind
Tonight) has brought its quiet
Into the house that was noisy
All day with TV voices,
The telephone ringing,
And the happy shouts of children
Romping from room to room.
Now, except for me, sleep
Has overtaken the house.
I bring the silence of the dark
Outside into it. I wrap that
Around my cares. Soon I, too
Will be sleeping.

Though Laughlin sleeps, his life and the literature to which he was devoted will continue to inform his waking worshippers. The Way It Wasn't is a delightful devotional.

James Laughlin was born in Pittsburgh, Pennsylvania. Poet, ladies' man, heir to a steel fortune, he founded the New Directions Press in 1936.

Jason Myers will receive his MFA in Poetry from NYU in May. His work has appeared or is forthcoming in Agni, Euphony, Paris Review, Poet Lore, TinHouse and West Branch. He is editing a book of the letters of Mary McCarthy. He lives in Brooklyn.