AS YOU WERE SAYING 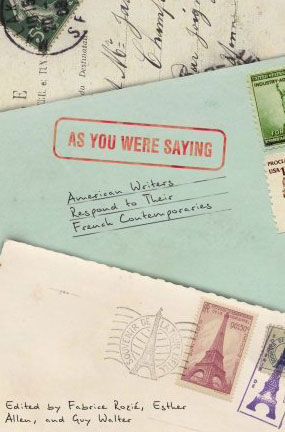 On many occasions I wondered what would have happened if the French initiator had finished his or her piece rather than leave it ajar for the American to peek through. Were the initiating and responding authors, in being less selfish with their work, less in love with it? Is this book just a "literary game", as the French Ambassador to the U.S, Jean-David Lévitte and the writer of the preface puts it, or is there strong authorial investment? What if Marie Darrieussecq had written a whole short story out of her four-page beginner? One could argue that the segment she wrote is an entirety in its own right, but I wanted more, and while Rick Moody's response is fun, there is a real gruesome potential in what Darrieussecq started and I nearly wish she hadn't passed on the torch.

In some cases the pairing creates a startling gem. Everett for example, while not directly continuing Bouillier's narrative, resumes the tone and punctures a lifeline in Bouillier's prose. Bouiller writes, "The truth of that inescapable love still escapes you and that bafflement never gives you any respite-for example, you now change your shoes everyday, you can't help yourself, you can't wear the same pair of shoes for two days in a row...". In his counter-prose, Everett digs at this idiosyncrasy, zeroing in on like a pulse. He writes, "You looked down at your feet, at the boots that had worn ever slightly over the meters of sidewalk, leaving part of them and bringing along part of the city. The boots must be changed, you thought..." The two fictions are joined by this prominent detail and seem to go hand in hand with one another.

As You Were Saying is flash fiction done right: it leaves the reader with an inlet to countless wonders, vibrations, and fleeting ecstasies. It is however, also a work that retains a sense of whim and nascence. Though a completed work, As You Were Saying is still a kind of experiment as opposed to a final proof. Each story is like a tasty appetizer, followed by another appetizer-sometimes clashing, sometimes complementing. As a whole, the book is not unlike a string of previews, a pithy glimpse here and there into realms of imaginations set to the unusual task of cooperation.

Nicole Audrey Spector is a fiction writer; as her photo suggests she is prone to bummers, and spends much of her free time in bed and in the bathtub, where she gets a lot of her reading and writing done. She is editorial assistant at a weird trade magazine in Manhattan, and co-organizes a monthly fiction reading series: Guerrilla Lit Reading. She lives in Brooklyn with her cat.