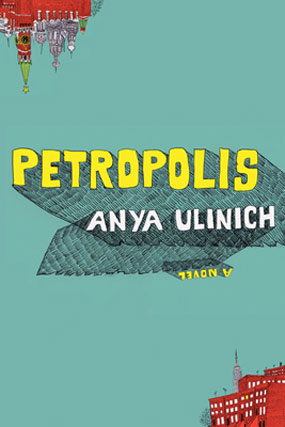 Viking Adult, February 2007
336 pages, $24.95
There aren't too many towns in America where a fourteen year-old can lose her virginity inside a giant concrete pipe. Still rarer is the municipality where such a pipe doubles as a home.

For Sasha Goldberg, however, such things are all part of growing up in Asbestos 2, the derelict Siberian outpost where Anya Ulinich's bubbly and bittersweet debut novel, Petropolis begins. According to Sasha's mother, Lubov, a woman of imperiously high standards who serves as the town's librarian, Sasha is a "child of the intelligentsia," though the intellectual scene in glasnost-era Asbestos 2 leaves much to be desired. There is an art academy, where Sasha goes after school to be mercilessly instructed in Soviet realism, and a boy named Alexey, who lives with his family in the pipe.

Aside from her drawing lessons and adolescent assignations with Alexey, Sasha's life consists of trudging through endless winter nights and wondering if her Jewish, half-African father, Victor, who defected to America when she was ten, will ever return. Sasha and her mother haven't heard from Victor in four years, but while Lubov denies her missing husband's existence with apparatchik-like rigidity, Sasha holds out hope that her father's flight is the first step toward improved fortunes for her family. "A father in America," she muses in a flashback soon after he leaves. "There weren't many things more glamorous than this. [Sasha] thought she was about to become one of the rare blue-jean-wearing kids in Asbestos 2."

Alas, no fancy denim arrives from the United States. Instead, Sasha gets pregnant by Alexey and flees to an art high school in Moscow, leaving the baby, Nadia, in her mother's care. Postpartum depression and a deep resistance to drawing-"another frail Pushkin, another long-waisted Muse to the dusty crowd"- leave Sasha looking for a second escape. She finds it at Kupid's Korner, a mail-order bridal agency.

Soon the sixteen-year-old Sasha is married to Neal, an Intel technician twenty-two years her senior, and living in Phoenix, Arizona. It's only a matter of time before she escapes again.

Petropolis, named for a poem by Osip Mandelstam which holds special significance for Lubov, might just as well have been called Escape from Asbestos 2, were it not for the sense, in the novel's second half, that Sasha is running toward something more complete than anything she's left behind. From Phoenix to Chicago to Brooklyn, Ulinich paints Sasha's journey with both sweeping strokes and an attention to sly visual detail worthy of Magritte. As Sasha leads her daughter away from Asbestos 2 in the novel's epilogue, "the landscape resembles an envelope. Four gray triangles: one sky, one road, two walls of trees," between which she and Nadia walk. Such language is impressive, all the more so from a writer who didn't use English regularly until she was seventeen. As Sasha zeros in on her missing father, we are treated to the absurd details of American life that only a foreigner can appreciate, rendered with dignity and wit.

Anya Ulinich was born in 1973 in Moscow. She began studying art as a child. When Anya was seventeen, her family left Moscow and immigrated to the United States. Anya attended the School of the Art Institute of Chicago and received an MFA from the University of California at Davis. In 2000, she moved to Brooklyn, abandoned painting and began to write. Petropolis is her first novel.

Austin Moran is a writer living in Connecticut. For whatever reason, he hasn't moved to Brooklyn.