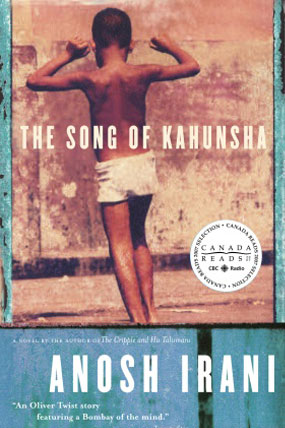 Bombay is often said to be a city of paradoxes. In Anosh Irani's second novel, The Song of Kahunsha, the city (now called Mumbai) is sensually rich though impoverished, alive with brilliant flashes of color though steeped in darkness. Yet the book's most compelling paradox is found inside the mind of ten-year-old Chamdi, the narrator, a boy who's nourished his imagination to a fantastic reach despite spending his life in an orphanage.

The action begins when Chamdi discovers his orphanage is to be sold, and flees in search of his father. He soon finds himself on the streets of Bombay, starving and begging. A chance encounter with the orange-bangled Guddi and the limping Sumdi, two urchins who've learned to navigate the slums, provides him with food and shelter but draws him into a corrupt netherworld. Soon Chamdi is working for the gang-leader Anand Bhai, a man who thinks nothing of cutting deep into the flesh of his charges to mark them as his own.

In the beginning, Chamdi's imagination sustains him as he struggles for survival. He fantasizes that his emaciated ribs are tusks that will one day break through his chest to protect him from evil. He believes in the power of colors, especially his beloved pink-red bougainvillea, and most of all in his vision of Kahunsha, the "city of no sadness" that Bombay will one day become.

But when religious violence sparks and spreads throughout the city in 1993, Chamdi is forced to confront the brutality of the world around him. There's no room in the slums for an innocent dreamer, and he must make stark choices in order to survive. Yet instead of letting the book descend into darkness or, worse, crafting a saccharine ending, Irani leaves us with a conflicted Chamdi whose goodness depends on being deeply implicated in the violence around him.

At first it's easy to dismiss some of the cruelties Chamdi encounters-in a book about Bombay orphans, you brace for the worst. But amid the rags, dust, and blood that surround Chamdi, Irani manages to create a few key images packed with unspeakable horror, like the limbless man who begs to be fed rat poison or the young boy whose shorts drip with blood.

Irani's style is spare, almost too much so, but the story succeeds as a fable more reliant on plot and dialogue than textual innovation. He clearly has a natural gift for story-telling that makes you marvel at the tale's twists and turns, if not always at its execution. Much of the novel feels like it could be read aloud-so it make sense to discover that Irani is also a playwright, and one with a hothouse imagination. He often writes about characters on the streets of Bombay, like men who sell limbs and women who sell rainbows. His prose style functions as yet another paradox, since it lulls you into expecting the morality-play ending of a traditional fable. But Irani is too clever for that. By leaving us with a complicated Chamdi, he weaves a more satisfying story of the complicity adulthood so often entails. And in the end this is also a story of the succor of the imagination, its ability to bloom even in the darkest corners of the streets.

Anosh Irani was born and brought up in Bombay, India, and moved to Vancouver, Canada in 1998. He is also the author of the acclaimed novel The Cripple and His Talismans. His most recent play, Bombay Black, commissioned and developed by Nightswimming, was produced by Cahoots Theatre Projects, Toronto, in 2006, and won four Dora Awards, including for Outstanding New Play. He divides his time between Bombay and Vancouver.

Bess Lovejoy is the former editor of many things, including the Vancouver, BC alt weekly Terminal City. She now lives in New York City and works on the American version of Schott's Almanac for Bloomsbury USA.