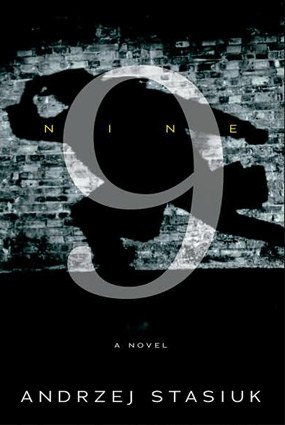 First published in Poland in 1999, and recently released in English via Harcourt, Nine is a rant of a novel that careens like a commuter bus without brakes through a city-Warsaw-whose residents seem to be suffering a collective existential withdrawal from their Soviet-Communist ruling past. Andrzej Stasiuk, the author, said to be the "most interesting" writer in Poland today, balances the prose in Nine with equal doses of melancholy and mania, juxtaposing pages-long stream-of-conscious soliloquies against dialogue as simple and coarse as Russian bread. The effect of his narrative style is unsettling; it's hard to get into a comfortable reading groove. But if one can manage to hang on for the entire ride-and buyer beware, the storyline is at times a challenge to follow-there is consequence. For, like Notes from the Underground, Dostoyevsky's shriek of a book, Nine-love it or hate it-will long stick to your mental ribs.

Stasiuk, who once deserted the Polish Army, begins Nine with a character, Pawel, who's on the run. Loan sharks have recently ransacked Pawel's apartment, and in order to escape their intended violence, he sets himself adrift in Warsaw. Hoping to beg, borrow or steal (as the cliché goes) the money he owes, he calls on several people, including two who are pulling on opposite ends of the Warsaw criminal rope. There's Bolek, an obese bear of a man, a drug-dealer who measures his success by the quality and quantity of possessions he has amassed in the vault-like apartment he shares with his cloistered teenage lover; and then there's Jacek, a drug-addict with a philosophical bent, who owns little more than the clothes he wears and who gauges his prosperity one fix at a time. Neither can help Pawel with his cash problem, but their presence spawns a trance of memories that help him make sense of his tenuous present.

Nine, however, is not told entirely from Pawel's perspective. Stasiuk writes a great deal from the mouths of Bolek and Jacek, and he also gives ample time to countless others, many who play no significant role beyond their Warsaw residency. Like a panning camera, Stasiuk shoots the city in flashing bursts, plucking thoughts and feelings from the minds of sleeping housewives, thieving boys, and even skulking cats, to paint a convincing portrait of a population trapped in inertia.

Clearly, Stasiuk does not lack for confidence as a writer. Nine seems to care little for traditional structure, yet there are unseen boundaries throughout the text that allow for his seemingly transparent segues. So often the prose delves into the dream state that when a lucid patch appears one is startled, almost like a slap in the face, or a strong cup of coffee that bolsters the reader for the next hallucinatory passage.

To enjoy Nine, one must embrace muted chaos. Reading it is like riding a roller coaster with valium coursing through your veins: you're going fast and furious but feel strangely detached, too sedate to scream your head off but wanting to anyway. But perhaps I'm digging too deep. As Bolek says, "Some things don't need discussing." So read Nine. And then I dare you to forget it.

Andrzej Stasiuk deserted from the Polish army under Communism, was sent to prison, and there began his writing career. In 2005 he won the NIKE Award, Poland's most important literary prize. He lives in the Carpathian Mountains.