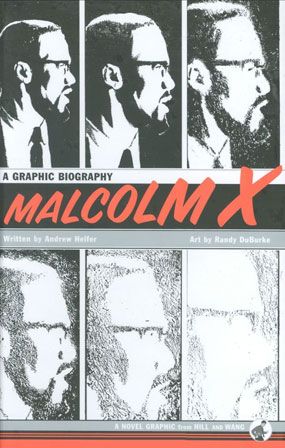 Hill & Wang, November 2006
112 pages, $15.95
The road to respectability for the literary graphic novel was more or less paved in 1992 by Art Spiegelman's Pulitzer-winning Maus. Mr. Spiegelman employed his artistic style to great effect, dramatizing his father's memories of Nazi Germany through a clever metaphor: the Nazis as cats, the Jews as mice. Since then, the genre has grown modestly, with Marjane Satrapi's Persepolis: The Story of a Childhood as one of the more notable recent examples. Persepolis offers a personal account of the Islamic Revolution in Iran with crude, almost childish drawings that serve to humanize a culture that is-to Western eyes-frighteningly different. In both cases, the artwork and the prose work in harmony, each augmenting and enhancing the other.

In contrast, Malcolm X: A Graphic Biography suffers from a fairly severe disconnect between word and image. Randy DuBurke employs a style that might be described as a kind of Gothic hyperrealism. From a visual-arts perspective, it's quite striking: the stark black-and-white drawings hew closely to photorealism while employing a film noir-ish use of contrast and shadow.

This style works when depicting the more sinister figures in Malcolm's life, or when dealing with more abstract concepts, such as the Nation of Islam's truly bizarre creation myth of the White Man. But when married to Andrew Helfer's words, the overall effect is alienating. Because there are so few "scenes" in the book, the reader is left with the sensation of watching a silent movie while a fairly articulate but not particularly interesting film-studies major summarizes the plot from the back row.

Lacking a compelling voice of its own, one might expect the book to let Malcolm himself do the heavy lifting. But you'll find precious few of his rousing, and controversial, public statements here. We get a few tastes-including his description of JFK's assassination as "chickens coming home to roost" and his ultimatum of "the ballot or the bullet"- but these are offered without much in the way of context, analysis, or point of view. Instead, we're offered an (almost) thoroughly objective recounting of Malcolm's life, minus the passion and plus a subtle editorial apology for his late-in-life embrace of traditional Islam (which Malcolm considered the ideal model for creating true interracial harmony.)

Indeed, if this book were to serve as your first encounter with Malcolm X, you'd be excused for wondering what all the fuss was about. Mostly, you'd probably just be bored. Which is a shame, because the story of Malcolm X's life is as compelling today as when it was first committed to page in Alex Haley's Autobiography of Malcolm X. The authors of Malcolm X: A Graphic Biography have clearly studied that book, but they've merely recounted the facts without capturing the soul. There's no reason 102 pages of pictures can't be worth 466 pages of words-but this piece of "graphic literature" fails to prove the point.

Randy Duburke has been a professional illustrator for 20 years doing comic book art, animation, editorial illustration, book covers and childrens' books. He has done work for DC comics, Marvel comics, MacMillian books, Chronicle books, Scholastic books, Lee and Low books, The New York Times and MTV animation. He was awarded the 2003 Coretta Scott King / John Steptoe award for best new talent/illustration for his first book, The Moon Ring. He currently devotes his time to illustrating childrens' books and graphic novels. He lives in Switzerland with his wife, Olivia, and children.

Andrew Helfer is a founding partner of Serious Comics. At his Paradox Press, he published groundbreaking graphic novels like Road to Perdition and the non-fiction "Big Book" series. He was at DC comics for 23 years.

Kevin Adkins recieved a BA in Theater Arts from the University of California, Santa Cruz, and an MFA in Screenwriting from Chapman University.