AN IMPENETRABLE SCREEN OF PUREST SKY by Dan Beachy-Quick 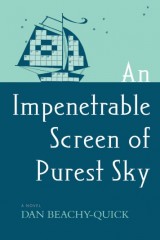