AN AMOROUS DISCOURSE IN THE SUBURBS OF HELL by Deborah Levy 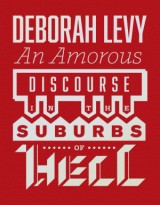 Is there a right way to be happy? The foremost strength of An Amorous Discourse in the Suburbs of Hell (And Other Stories) does not lay necessarily in the beauty of Man Booker Prize shortlisted author Deborah Levy's writing, but rather in the pertinent idea behind the collection as a whole, and in the way that she inventively poses such questions, without answers, within the framework of a conversation. This playful, conceptual work uses dialogue to tackle big and ever-relevant questions. The conversation feels current, yet, An Amorous Discourse in the Suburbs of Hell was originally published in 1990 (this is the first US edition), further illustrating the seemingly everlasting applicability of this topic.The conversation happening in Discourse occurs between a caustic, unsatisfied angel and an overly complacent suburban man. They are an unlikely pair, but perhaps that is what makes their love affair so entertaining. She is feverish and desirous. He is tame and docile. She is looking for “a clang! a clamour! a new expression!”, while all He desires is “A little garden/ Someone to love/ Enough to get by”. Notably, “she” is all lower case, while “He” starts every line with a capital. Punctuation is the primary tool that Levy uses to differentiate between the two characters respective personalities, which can be problematic at times. He and she are having a philosophical argument, and possess wildly differing opinions about what happiness is and can be. Odd then, that the poetic voice feels consistent throughout the text. Levy relies on grammatical artifices to delineate these two characters, without changing their tones or manners of speaking. One might suspect that both voices echo Levy's own, and that Discourse puts Levy in conversation with herself. We're all in a type of tug of war with ourselves. We want wild romance and spontaneity, but also crave security and stability. We want to “Enjoy peaceful walks/In appropriate clothing”, without abandoning our sense of adventure. We want to “dance on a nervous scorpion/ dance on the eyelash of a bull”, but what if that means sacrificing a good night's sleep? Managing these dueling qualities of our nature is one of life's definitive balancing acts. Levy cleverly illustrates that maddening dichotomy, and to top it off, she does it with verve.Deborah Levy writes fiction, plays and poetry. Her work has been staged by the Royal Shakespeare Company, and she is the author of highly praised books including Beautiful Mutants, Swallowing Geography and Billy and Girl. Her novel, Swimming Home (2011, And Other Stories) was shortlisted for the 2012 Man Booker Prize, 2012 Specsavers National Book Awards (UK Author of the Year) and 2013 Jewish Quarterly Wingate Prize, while the title story of her most recent work of fiction, Black Vodka: ten stories, was shortlisted for the 2012 BBC International Short Story Award. In summer 2013 Notting Hill Editions will publish Things I Don't Want to Know – her non-fiction book on George Orwell's Why I Write.