Joshua Cohen's Aleph-Bet: An Alphabet for the Perplexed

Joshua Cohen was born in southern New Jersey, in 1980. A literary critic for The Forward he lives in Brooklyn, NY. His books include a collection of stories, The Quorum (2005), and a novel, Cadenza for the Schneidermann Violin Concerto (2007). Another novel, A Heaven of Others, is forthcoming in 2008.
November 9, 2007 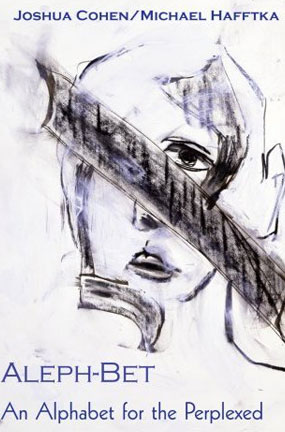 In the Jewish tradition, language is holy. More precisely, one language is holy-Hebrew. Hebrew letters were created by God, the story goes, and are deeply powerful. They can summon new life if arranged in the right order; and once deconstructed, can offer clues to the meaning of the Torah. Even their shapes are suffused with significance.

Aleph-Bet: An Alphabet for the Perplexed follows this tradition, but from a postmodern perch: skeptical, personal, and as inclined to find meaning in the subjective as in Jewish grand narratives. Composed of three texts by Joshua Cohen, sprinkled with images by Michael Hafftka, the book unites image and text, sacred and profane. Two of the three texts are short stories, and the third, a linguistic essay that’s challenging but rewarding in equal measure.

The second story, "Shabbos Dinner, with Letterforms", is the standout, at least in this reviewer’s opinion. Here various Hebrew letters represent members of Cohen’s family as they sit down to Friday night dinner. His little sister is a yod, a tiny squiggle that fills only the top quarter of a line: “spun and wound, how she always seems crimped, coiled, rapt and tightly as if ever-prepared, about to pounce.” His father is a vav: “upright… unbending, narrow in the knees.” Each letter is linked, in free-form disquisitions, to the concrete qualities of his family’s posture, speech, flesh. This is Cohen’s personal aleph-bet, his emotional gematria.

The first story, "Naming," ploughs the history of Cohen’s names (both Hebrew and English) and explores the position of a lapsed Jew: a Jew who no longer keeps kosher, who “drinks wine in taxis home with foreign girls,” but who is “happy, despite”. And though the piece’s relationship to the Hebrew aleph-bet may at first seem tenuous, according to Jewish tradition God created the world by naming, and so this primordial power introduces the interrelationship of language and the physical world.

If we learn more about Cohen and his family in the first two texts, we learn more about Hebrew in the third. This essay explores the five sophiyot, or final forms: letters that take a different shape when they appear at the end of a word. The final piece also contains some of the most beautiful of Hafftka's images, including an inky, somber ayin and a somehow terrifying tav. Cohen is searching for significance, and the text is loud with theory, as if the din of many rabbis arguing had been transmitted to the page. His essay’s conclusion is radical: “that all of the twenty-two letters of the Hebrew alphabet… may, in fact, be impure-not false but… fictions, merely the perversion of possible truths.”

The answer is dramatic for a religion that believes itself holy in its singularity. Yet for Cohen, the history of these forms-and of Judaism itself-is “consecrated randomness, converted to a condition of choseness.” His final analysis makes the book all the more remarkable, since it comes not from a place of religiosity, but from the grand Jewish tradition of challenging engagement, and finally, from the love of questioning itself.

Joshua Cohen was born in southern New Jersey, in 1980. A literary critic for The Forward he lives in Brooklyn, NY. His books include a collection of stories, The Quorum (2005), and a novel, Cadenza for the Schneidermann Violin Concerto (2007). Another novel, A Heaven of Others, is forthcoming in 2008.