AFTER BIRTH by Elisa Albert 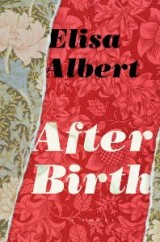 WHEN POST-PREGNANCY IS A HORROR MOVIE When we meet Ari, the narrator of Elisa Albert's new novel, After Birth (Houghton Mifflin Harcourt), it is a year following her son's birth, and she hasn't quite shaken the damage it has wreaked on her identity. Ari, a feminist scholar, and her husband Paul, a professor, are academics that have recently relocated from the city to a college town in upstate New York, in a move worthy of a New York Times Style Section article. But according to Ari – whose caustic, self-aware voice registers somewhere between Sylvia Plath, Kathy Acker, and a Lena Dunham character – contrary to what many might think, "this is not a cool town. No espresso, no hand-spun textiles, no vintage shops. This is not one of those secret hipster hideouts. Sweet enclaves where you can find well-dressed arty fuckers with kids named Zenith, Phoenix, Fidel; this is not one of those. This is murdered corpse of a town. This is a decline-of-the-empire town.” (154)And though the wealth of food co-ops, college students, and nearby loft parties might suggest otherwise to an impartial viewer, the reality is beside the point. In this novel – which is largely focused on the year following the birth of Ari's son and the havoc it has wreaked on her sense of self – the town is a character in its own right. It acts as an external manifestation of the “murdered corpse” that Ari feels like post-birth. For while Ari's love for her child is real and overwhelming, she is also filled with a rage and resentment that opportunities once open to her have come to a close. That darkness briefly seems to lift upon the arrival of the nine-month pregnant Mina, a once famous riot grrrl rocker type and now a poet, who has just moved to town. Ari, desperate for the cool and self-assured woman to become her friend, finally succeeds at befriending her when she helps Mina through the challenging months after birth. It is here, where Albert's scathing treatise on pregnancy and womanhood begins to lose a little steam. Instead of focusing on the complicated relationship between two different, strong women to illuminate something interesting and new in the way Mary Gaitskill did so impressively in Two Girls Fat and Thin, Albert uses Ari's friendship with Mina as a jumping off point to explore the many complicated and fraught relationships Ari's had with past women in her life. While Albert excels at dissecting these relationships marred in jealousy and pettiness – from Ari's mother to her adult best friends – the relationship with Mina ultimately feels flimsy; a mere plot device that could have become something much more. Still, that's not to undermine After Birth's undeniable raw power. In a particularly powerful passage, Ari thinks resentfully, “No one gives a crap about motherhood unless they profit off it. Women are expendable and the work of childbearing, done fully, done consciously, is all-consuming. So who's gonna write about it if everyone doing it is lost forever within it?”It is in moments like this that Albert hits on something fundamentally true about new motherhood that most of us are too afraid to explore, for risk of seeming selfish or unappealing. These rage-filled feelings may exist elsewhere if you really hunt for it – anonymous chat threads, a paragraph in a magazine article, a brief glance at a friend's face, maybe even your own head – but After Birth is singular in its willingness to embrace the all-consuming fury and occasional disappointment of new motherhood so openly. To date, it is the only book I've read that acknowledges that the shift from pregnant woman to mother is as much a gestation period as the pregnancy itself. And for this reason alone, I'll likely be recommending it to a lot of women who have gone through it – and to the ones experiencing it now, perhaps with just a fair bit of warning.Elisa Albert, author of The Book of Dahlia and a collection of short stories, has written for NPR, Tin House, Commentary, Salon, and the Rumpus. She grew up in Los Angeles and now lives in upstate New York with her family.