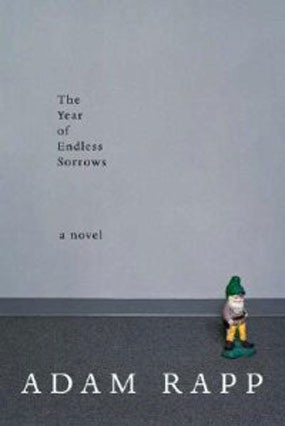 Farrar, Straus, and Giroux, December 2006
416 pages, $15.00
Adam Rapp's coming-of-age novel, The Year of Endless Sorrows, places its unnamed narrator, a new graduate and Midwestern naá¯f, in the middle of a pre-gentrified East Village. He arrives in New York with dreams of literary stardom and of meeting and marrying his true love. However, reality crushes his lustrous post-collegiate vision as he finds himself surrounded by slacker roommates, city squalor, and a corporate work environment.

Written in vignettes, Rapp's novel depicts the inner life of a young man who toils at a top book publisher where the entry-level younglings hold Ivy League degrees and the executives are decadent and patronizing. Between performing his quotidian job duties and secretly working on his novel, he becomes romantically entangled with a struggling actress and Soviet expat, Basha, as well as with Alexa, the assistant editor who may hold the key to publishing his manuscript. But the trysts that first seemed a welcome distraction eventually start to disillusion him and pull him further from his aspirations.

This narrator has yet to kill his idols. When Alexa instructs him to rewrite his manuscript to follow the rules of commercial fiction-change third-person narration to first, and use local color-the narrator balks at altering his work. When he learns that he contracted an STD from promiscuous Lacy, he acts as if he's been diagnosed with cancer. Rapp's narrator possesses innocence to a fault: it isn't until the very end of the novel that he realizes his naiveté, and its potential to consume him.

Rapp, who is also a playwright and director, knows when to let a scene unfold in slow motion and, conversely, when to propel it. Moreover, he counterbalances drama with pointed satire. For every scene in which the narrator pines over a girl or moons over his beloved manuscript, there is a scene in which his coworkers delight in their own depravity. In one encounter, a coworker draws a pornographic picture of him on a napkin and proceeds to talk to him in detail about her various fetishes; it is then revealed that she is a children's book illustrator.

As the narrator's Sales Director boss might say, The Year of Endless Sorrows is a tough sell. It's a collection of vignettes shaped into a literary novel, a bildungsroman, and an office satire. However, Rapp's graceful, vibrant prose grabs you from the first sentence. And his dazzling language and impeccable comic timing make this personal portrait of a young, idealistic writer especially poignant.

Adam Rapp is the author of numerous plays, most notably Nocturne (Faber, 2002), and Red Light Winter (Faber, 2006), which was a finalist for the Pulitzer Prize for Drama, as well as six novels for young adults. He lives in New York.

Graceanne Bello graduated from UC Berkeley with a B.A. in English. Since then, she has worked as a restaurant hostess, model, executive assistant, and now works as an Internet copywriter. Her writing has appeared in Flavorpill and Zink magazine. She is the Web Editor for the literary magazine Pindeldyboz. You can read her blog on literature and publishing at http://thebookblogger.com/zooba.