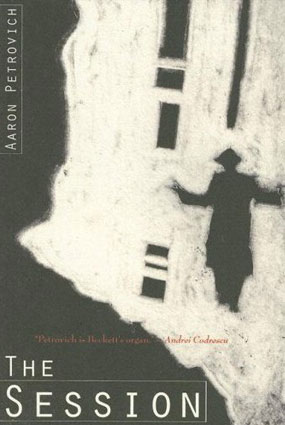 Akashic, March 2007
59 pages, $10.95
As sensitive readers we hesitate to admit it, but we are nearly always disappointed when a preposterous premise turns out to be the protagonist's dream, or daydream, or fantasy, or form of insanity. Psychological insights are rarely compensation - not for all the fun we thought we were having. One of the things that make a writer like Samuel Beckett so fascinating - no, so entertaining, so funny - is that his premises really are his premises: Didi and Gogo are standing on a lonely road, expecting someone to show up; Ham and Clov actually huddle in a bunker, watching what appears to be the end of the world. Whether the characters act crazily in these circumstances is for us to decide: what would you do as Godot kept you waiting?

No doubt it seems unfair for any review to begin with a reference to Beckett, but Aaron Petrovich asks for the comparison. His novella-in-dialogue, The Session, is Beckett-pastiche, or -parody, at the very least -patrimony: in a spare setting, two men trade petty quips and paradoxes, quibble and contemplate suicide, their verbal ping-pong interrupted by sporadic but vast pauses. Nearly nothing happens, but puns, word-confusions, and repetitions keep the verbal cascade surging. Early in the novella, Petrovich even offers a direct homage, or challenge, to Beckett, echoing Beckett's famous "I can't go on, I'll go on":
We must go on.
I can't.
You must.

The question, then, is: does Petrovich go anywhere Beckett hasn't already?

His premise promises to. At the outset Petrovich ventures into territory more grotesque, and more darkly comic, than any Beckett explored. Petrovich's protagonists are two detectives discussing the death of a mathematician, who, in the midst of a lecture on finiteness, was suddenly murdered and disemboweled by his entire audience. As the mathematician's organs have yet to be found, the detectives speculate that audience members might have eaten them:

We'll want to perform an autopsy.
On whom?
The lunatics.
They're not dead.
When they're dead.
Were you planning to kill them?
The thought had not occurred to me.
Then an autopsy is out of the question.
I wouldn't be opposed to it.
What?
Killing them.
This is not an option.
If it were, I mean.
It isn't.

This is perverse and funny stuff, and anyone who appreciates deadpan will eagerly await where it might lead. But, as we learn fairly early in the novella that both detectives are named Smith, and that they are discussing the case in an asylum cell "generously" lent to them by a psychiatrist, I don't think I'm giving away too much if I imply that this premise is not really the novella's premise.

It is to this slippery book's credit that I still can't quite say what its premise is, or what exactly happens: whether there are two characters, or only one, or three; whether a mathematician, or anyone, was murdered; whether we are witnessing an inner conflict, a psychological death, an actual death, or what. The book leaves one with plenty to think over and play with, and the answers one comes to will depend on - appropriately for a book about the ambiguity of identity - who one is. And as Petrovich writes musical lines of dialogue ("You are deceived, I believe, by a beguiling melancholy") and keeps up a breathless pace until the end, the re-reads this book demands can be performed with ease.

But still, I was disappointed. God, was I disappointed. It isn't only that Petrovich punctures a premise rich in comic potential with hints that it's probably all some character's solipsism - that, aesthetically, he lets himself off the hook by implying that the premise is craziness. What's really unexpected - and off-putting - is that Petrovich betrays his premise's sharp comic spirit. At the end the Beckettian back-and-forth suddenly swerves into sentimentality. As the two voices - whomever they are - start to surrender to existential dread, Petrovich, in a burst of pathos, uplifts them: they leap into impassioned speculations about human electricity and white light, and the book climaxes with a panicked epiphany, as one of the them stutters on and on about a "crystal white safe place." The absurdity turns out to be - or spontaneously turns into - a thin veil drawn over melodramatic metaphysics:

What now? All that wonderful dark comedy and we wind up with a soliloquy about the light inside us?

I finished The Session - and my second and third readings of it - itching to read another book: a book about two nebbish detectives investigating the case of a conceivably cannibalized mathematician - one that takes that premise and runs with it and doesn't turn back. That book might take us somewhere very funny, and perhaps also somewhere new.

Aaron Petrovich is a writer of fiction and theatre. He is a regular contributor to Exquisite Corpse, and associate editor at Akashic Books. He lives in Brooklyn.