A SCHOOLBOY'S DIARY by Robert Walser. Translated by Damion Searls. 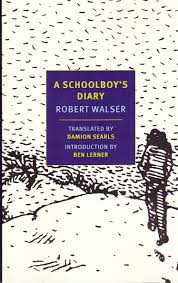 To read Robert Walser is to fall under the enchantment of a particularly open and youthful enthusiasm. His essays of Fritz Kocher, which comprise the first part of this new collection of mostly never-before translated stories and vignettes, A Schoolboy's Diary (NYRB), are an excellent place to either start with Walser's work or to encounter him again, running away as they do with the unchecked receptivity and guileless prejudices of adolescence. Each of the fictional student Fritz's essays are composed in response to a putative classroom prompt on such topics as Autumn, Friendship and Poverty, and even the most generalized topics send his thoughts wheeling idiosyncratically. Fritz is a naá¯f, susceptible to daydreams that consume the majority of his energy (it certainly is not applied to schoolwork), and his wanderings follow the natural course of his mind: extolling the glances of women in the street, the power of the class clown to amuse his schoolmates, the gentle sadness of music. His memory and imagination are his two guides, untouched by more practical concerns. It is the voice of a child, and its open and receptive spirit accounts for the artless authenticity of the writing. Walser is also notable for his embrace of contradiction. Opining on the topic of the poor, Fritz refuses to assign the state any nobility, noting that "property is necessary for life, just like breathing for running"; and yet elsewhere he writes that "Only the poor children tug at my heartstrings--I know they have no warm rooms in their houses. How horrible it must be to sit around and freeze". A product of small town Swiss bourgeoisie mores, Fritz can both react with emotion at the thought of individual suffering and offhandedly espouse the more hard-hearted principles of his society in such a way as to reveal their deficiency more fully than any well-reasoned attack might. An artist in his soul, who belongs to no more organized a political persuasion than whatever comes of his twinned and contradictory urges for both beauty and order, Fritz reacts to every topic naturally, by instinct rather than by reason.Some of the stories included in Part II are less valuable. The romanticism that dominates Fritz's rich internal life is always tumbling headlong over more mundane concerns, as when he says on the following on the topic of Man:

A person with a heart is not only the best person but also the most intelligent person, because he has something that no mere bustling cleverness can give him. I repeat once again: I never want to get drunk; I don't want to look forward to meals, since that's beastly[.]

The most exalted and overly dramatic statements by Fritz coexist with more quotidian affairs, giving the ideal and real an extra tension through constant swings from one to another. It is the most serenely unaware stream of consciousness possible, and the artlessness of the delivery conceals the psychological and political complexity underneath. But in the shorter vignettes, written without the pretext of coming direct to the reader from the pen of precocious Fritz, that magic is largely lost. Beautiful scenery is rhapsodized over as in Part I, but without the more trivial details of life to intervene in the idealized depiction these short vignettes mostly fail to come to life, though some are wonderful brief snippets of life as seen on the street, short observed moments memorialized for all time. Walser was, in addition to being something of a narrative trickster forever proffering and then snatching solid ground away from the reader, a keen people watcher, enthralled by the life unfolding around him and turning his attention this way and that to try and capture every aspect of the world revolving around him, seeking after it with undismayed eagerness. This offers the best reward when the observations are linked organically together instead of existing in separate short pieces, however: when the effect is allowed to accumulate.Part III offers something more in this vein with the story of feckless Hans, pulling the collection together at the end more coherently than the middle stories manage to do. Yet the word 'story' is perhaps the wrong word to use. Walser is not constructing plot, or tending anywhere with purpose. He seems to know that no great drama is needed to find great material, to trust in the importance of impulsive feelings, barely understood yearnings, dim impressions, racing thoughts: the stuff of daily life, especially as it is intensely felt by the young when the supposedly banal is still novel and exciting. After reading Walser, one realizes perhaps it always should be. He has a unique gift for stripping away a reader's layer of world weariness to expose forgotten joys and sorrows, and to rejuvenate a sense of awe. As Fritz writes, "I cannot begin to understand it, but I let it happen calmly since it is good and I like it. My unpracticed pen cannot express how good it is, how much I like it." Walser may ape an unpracticed pen as well, but the effect of his prose, keenly responsive to each passing impression, belies the claim.Robert Walser (1878–1956) was born into a German speaking family in Biel, Switzerland. He left school at fourteen and led a wandering, precarious existence while writing his poems, novels, and vast numbers of the “prose pieces” that became his hallmark. In 1933 he was confined to a sanatorium, which marked the end of his writing career. Among his works available in English are Berlin Stories and Jakob von Gunten (both available as NYRB classics).Damion Searls has translated classic twentieth century writers such as Proust, Rilke, Elfriede Jelinek, Christa Wolf, Hans Keilson, and Hermann Hesse. For NYRB Classics, he edited Henry David Thoreau's The Journal: 1837–1861, translated Nescio's Amsterdam Stories, and will retranslate André Gide's Marshlands. He has received Guggenheim, National Endowment for the Arts, and Cullman Center fellowships and is currently writing a book about Hermann Rorschach and the cultural history of the Rorschach test.