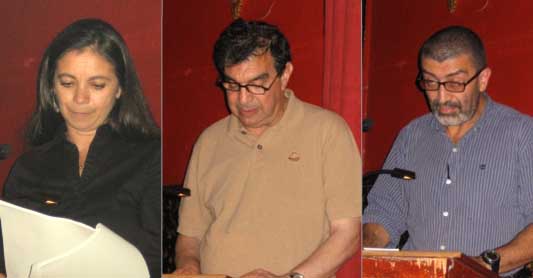 Cafe Nueva York members Carmen Boullosa, Eduardo Mitre and Naief YehyaFor a few hours Sunday evening September 30, 2007, KGB became a little more like Café Tortoni of Buenos Aires as four distinguished members of the literary collective Café Nueva York read from new work.Members of the collective, which has been active for one year, are all residents of New York who write in Spanish. One of its purposes is the creation of an “ambiance of critical sociability” that exists today in the coffee houses of Spanish-speaking countries and to resurrect the lineage of Lorca and Marti who both lived and worked in New York. Café Nueva York frequently holds public readings, like one held recently at the Museo del Barrio in which approximately thirty writers gathered to read in their native tongue, Spanish. When asked to give in her own words the meaning of Café Nueva York, Carmen Boullosa said, “it's an irregular particular of New York.” 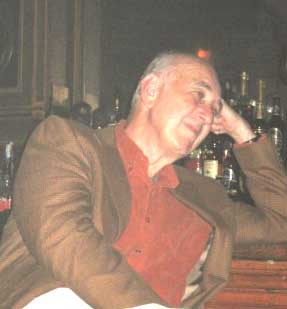 Bolivian Poet Eduardo Mitre began the evening with a reading of poetry from his collection The Umbrella of Manhattan, his ninth volume of poetry. The Umbrella pays tribute to the urban anatomy of New York, as did the poem he read entitled Bryant Park, in which the narrator meets his lover in the park to have creation revealed to him under pirouettes of water and soaring sycamores. Other poetry was inspired by September 11, 2001 as well as abstract expressionist paintings. Is the umbrella a symbol? "Yes, it is," he replied. It symbolizes protection, but it also opens up to the world. Mitre has taught literature at Columbia University and Dartmouth College. He now teaches at St. John's University. Jose Manuel Prieto read from his new novel, Rex. He is the author of several novels, non-fiction books and essays and is also a translator of Russia Literature into Spanish. He is fluent in several languages having moved from his native Cuba to Russia at the age of nineteen. Currently Prieto lives in New York and is head of the Joseph A. Unanue Latino Institute at Seton Hall University. He has been a Fellow at The New York Public Library's Center for Scholars and Writers; he has received a Guggenheim Fellowship. He's been praised by literary critics of The New York Times and The New York Review of Books. Aleksandar Hemon called Prieto's last novel Nocturnal Butterflies of the Russian Empire “an aesthetically blissful reading experience.” Did New York influence his writing the way Russia had influenced his earlier writing? "Of course, but I lived in Russia when I was young," he said. "Now I'm more—" and he paused for a moment thinking of the right term "—crystallized."

Leading Mexican novelist, poet and playwright Carmen Boullosa riveted the audience with the opening lines, “I'm not an expert on the subject of ghosts.” She proved to be just that as she moved from a contemplative philosophical tone, “the only ghosts that survive are those that prize something on our side,” to riotous, as when Octavio Paz inhales a ghost while hailing a cab on fourteenth street and is stricken with “poetic flatulence.” Boullosa has been a Guggenheim Fellow, a Fellow of the New York Public Library Center for Scholars and Writers, and a Distinguished Visitor at Columbia University and Georgetown University. She is currently a Distinguished Lecturer at CCNY. In 2002, along with fellow literary great Salman Rushdie, she founded a house for persecuted writers in Mexico City. She has published twelve novels, including her latest, The Perfect Novel (a work of science-fiction set in Brooklyn), which was published in Mexico. Only a reader as hilarious as Naief Yehya could break the spell of Carmen Boullosa. Yehya read from A Stabbing Pain, a short satirical piece featured in the winter 2007 issue of BOMB Magazine. Yehya's story is about a man who has a few months to live and whose lawyer, Matias Schmidt, tries to sell the rights to his death for $15 million. The audience broke into laughter when Yehya read “Not even an imminent death will eliminate ambition.” Naief Yehya, who looks like Robert De Niro but bookish, lifted his head to the crowd from time to time to appease the risible audience with a mischievous smile. An industrial engineer by training, Yehya is a journalist and critic of film music and culture. He has published several works of fiction and non-fiction such as Sanitary Works, War and Propaganda: Mass Media and the Myth of War in the US and his latest Pornography: Mediated Sex and Moral Panic. Yehya was born in Mexico City and came to New York in 1992. After the reading I asked Mitre and Boullosa how often they met; if they thought Café Nueva York was at all exclusive to non-Spanish speaking people, if they felt that their sense of individuality might be lost in joining a group? Mitre drank some more of his drink. Finally he said, “You're a question machine.” He seemed relaxed. “What do you do?” he asked me. He looked me in the eye. I closed my book, which was full of questions. - Rozi Jovanovic