The house was packed 45 minutes before KGB's latest fiction night began. As guests streamed in, it became apparent the air conditioner has gone on the fritz-a fact duly noted by host Suzanne Dottino as she wriggled her way to the front.


****Subscribe to KGB BAR Reading Series podcasts by copying and pasting: feed://feeds.feedburner.com/kgbbarlive into your favorite podcast application (iTunes, Thunderbird, etc.) In ITunes, simply go to Advanced, then select "subscribe to podcast," and past in the url above!

Ken Kalfus (author of The Commissariat of Enlightenment, Thirst, Pu- 239 and Other Russian Fantasies) was up first. He introduced his latest book, A Disorder Peculiar to the Country, by saying it was about a couple in the throes of a divorce who each think the other has died on 9/11 and "are secretly thrilled." He also noted that said couple are forced to remain in the same apartment, because neither can afford to move. "It's one of those New York stories," he explained. He then read a section about a man obsessed with his retirement account. The crowed seemed to enjoy a passage in which the protagonist (the husband in question) realizes that a colleague's lecture has "cost" him as much as a steak. I think we've all been there. 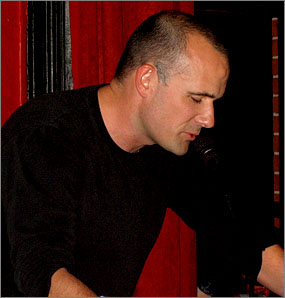 Mark Z. Danielewski
Mark Z. Danielewski's (author of House of Leaves and Only Revolutions) introduction was followed by a lot of shouting. To be more precise, there was a warm round of applause punctuated by a lot of shouting. Someone in the back seemed particularly pleased Danielewski had been born in 1966. After a few words, it became apparent that in the movie of his life, Danielewski will be played by Henry Rollins (Ken Kalfus, however, will be played by Woody Allen). Though vaguely pugilistic in appearance, his themes were romantic, and his word-play nothing short of dazzling. Acrobatic actually. For about a half an hour, KGB was transformed into a baroque circus tent thick with the sweat of Danielewski devotees. It turns out there are many: word has it many of Danielewski's fans have been traveling the country to hear him read. Once he finished, a long line of fans formed desperate to have their books signed. Small wonder, really; Danielewski is like that enormously talented friend with energy to burn, the angel-headed hipster one who would be amazing if only he could focus-except Danielewski has, and is burning diamond-bright.

Jane, Christine; Seth Harris; KGB audience
Also another random observation for the evening: two seatless and forlorn teenage girls looked dubious when Suzanne suggested they sit on the floor beneath the podium ("on the floor?!"), but once seated they soon perked up under the envious looks of the 3-deep crowd lining the bar. Those planning a night out to KGB, take note: plan ahead, arrive early, and always dress in layers.

Plus one MORE closing randomness observation/question: Someone in the audience asked, "What does the Z. in Mark Z. Danielewski stand for?"-well, any ideas? -try guessing-post a message-we here at the KGB are dying to know your thoughts!!!