CLICK HERE TO LISTEN TO THE IMPETUS PRESS READING 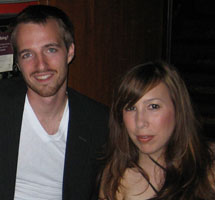 Willy Blackmore, Jennifer BanashJennifer Banash and Willy Blackmore, founders of Iowa City's Impetus Press, took over KGB Bar along with almost their entire roster of authors on Monday night to give the audience a taste of what fiction tastes like before it's been distilled down to pandering mass market drivel. It would be safe to call it an evening of literary moonshine. I'm guessing that the stories read on Monday night were created in the same spirit of secrecy and excitement that the bootleggers of the early 20th century must have felt when they were concocting their illegal spirits away from the eyes of the law.

Nick Antosca was first up to read from his debut novel, Fires. As he began to read, I scrawled the basics on the back of a postcard: "debut fiction," "twenty-fucking-three years old." But his story of a pedophilic football coach and a raging fire threatening to devour a suburban neighborhood made me add: "creepy," "disturbing," and "buy this the day it comes out." My gay ass also added, "Way hotter than Marisha Pessl." I have a feeling the girls sitting next to the podium would agree.

Dave Housley was up next to read a story from his forthcoming collection Ryan Seacrest is Famous, a phrase which arguably sums up the reasons why so many other countries hate the United States. Look for this book to be burned (or perhaps praised?) on Al-Jazeera sometime next year. The piece he read from the collection was an open letter from the Frog Prince published in US Weekly to a princess who seems to be an amalgamation of every sex-tape making, drug snorting starlet working in Hollywood today. What started out as an exercise in pop cultural name checking dissolved into a bittersweet surreal love story that ended on a strangely moving note.

The selection Kate Hunter read from her novella The Dream Sequence was just that a figure-eight of memory and identity. Kate's narrator (who may or may not be the Kate at the podium that night) was confused, lost-someone who knew what a tree was, but at the same time had no idea what a tree was. It was delightfully disorienting and a great taste from a fantastic debut.

Sheala Hansen, Eric Luc, Nick BurdJennifer Banash, one of the founders of Impetus, was up next to read from her novel Hollywoodland: An American Fairytale. And no, this is not the same Hollywoodland in theaters now. But that's good, because the idea of Ben Affleck as Superman is laughable, if only because we saw him repeatedly defeated and belittled in the press by the Kryptonite meteor that was (and probably still is) Jennifer Lopez. (Speaking of J.Lo, where in the fuck is she? Probably working on her first novel….) Banash gave the audience a taste of her sprawling porno-epic, a fairytale-turned-nightmare set in the Los Angeles of Less Than Zero and The Day of the Locust.

Christian TeBordo closed the night with a section from his novel We Go Liquid. It involved a twelve-year-old boy taking pills to make his dick bigger and harder. Yes, this sounds horrifying and juvenile, one of those stories written by that guy in your workshop class that you secretly hope never gets published. But then you realize that the boy is taking the pills because a spam email in his dead mother's account told him to: you get the feeling the TeBordo is writing thetype of ghost story that Bret Easton Ellis tried to with Lunar Park, but with a little more success. It wouldn't surprise me if We Go Liquid is next year's hard-on inducing debut.