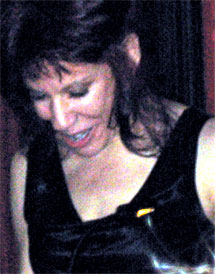 9.10.06: KGB Bar's Sunday night fiction series returned from summer hiatus this week with readings from Elisa Albert and Binnie Kirshenbaum. The bar served as cozy living room to a reunited listening family - everyone comfortably packed and tucked in. Aaron Hamburger (author of Faith For Beginners) offered up his striking profile to fellow gallery members as he perked an ear; Gary Shteyngart scrutinized craft from a barstool.

Elisa Albert opened with an amuse-bouche from her collection: How This Night Is Different (an excerpt chosen by her mentor, teacher and "fellow vegetarian," Kirshenbaum). In a Seder-scene of young-professional angst, the 12th plate is broken, a wisecracking father incessantly assumes Elijah's at the door, and the narrator yearns to strike at her raging yeast infection with an ax. Fearless, though somewhat self-indulgent, Albert had the room in small stitches. Afterward, a grad school co-ed in the back commented, "Though well-crafted, the piece felt young. I don't know if it was because the situation was so familiar, or just because Elisa looks so young."

Top: Emily Schlesinger, Sarah, Catherine Foulkrod, Bottom: Denis Woychuk, Gary Shteyngart, Binnie Kirshenbaum, Susan Chi, Suzanne Dottino After a brief intermission (which included a giveaway of Bite tickets) Binnie Kirshenbaum swept in, reading from her novel-in-progress Greater Than Love. Her words distended the candid atmosphere into a barefaced embracement of the tragic and the absurd. The affect, though hilarious, was deeply rooted in chronic aches: the scrutiny of a mother, the cavity of socially-mandated love …. In one moment she deftly describes the narrator's mother's death, her organs rotting like fruit. In the next, that mother is chided for her desire to kiss slobbering dogs, and a man in a fur coat is declared, "the most jerk-off thing ever." (The room now doubled-over for real.)

Often compared to Philip Roth, Kirshenbaum swings with a no holds, self-reflexive humor that dislodges preconceptions to muckrake their roots. With one ear to relish such quality and the other ear seeking vibrations of the coming train, KGB postered the freshie and the virtuoso side-by-side, chummed about in the watering hole, and thus began the new-season buzz.

8.30.06: This past week Bob Dylan released Modern Times, his 31st studio album to date, and fans and critics around the world began salivating. Nothing gets either going like a new album, and both were in attendance at KGB's Bob Dylan Night, which featured a roundtable discussion of the new album and its place in Dylan's colossal body of work.

KGB was packed, with people squeezed out past the bar's doors throughout the discussion. But it wasn't the usual crowd of writers and readers, it was a crowd of Dylan fans who'd managed to get the word about a Dylan event, as they do. The panel was moderated by Benjamin Hedin, editor of an anthology, Studio A: The Bob Dylan Reader. Panelists included music archivist Mitch Blank, who participated in the Dylan documentary No Direction Home, Mary Lee Kortes, leader of the band Mary Lee's Corvette; Bob Levinson, who teaches the course "Discussing Dylan" at The New School; Robert Polito, director the Graduate Writing Program at The New School; David Remnick, editor of The New Yorker, and Alex Ross, music critic of The New Yorker.

In the course of the discussion, the panel dissected the album's title, the arrangements and styles of the songs, compared it to previous albums, and discussed the very fact of Dylan's longevity. They sought to put the album in the context of Dylan's long and evolving career, and in the historical context of American music and artistry.

As it progressed, it turned out the evening was not to be without it's own drama: in the middle of one of the panelist's analyses, a voice yelled from the back of the room, "maybe you just don't understand!" It was none other than A.J. Weberman, the infamous self-proclaimed Dylanologist, known best for his practice of "garbology" - going through Dylan's trash in order to find clues to the meanings of his songs. He definitely lent a touch of authenticity to the gathering, as he has played a role in the Dylan story of the last forty or so years. As Nina Goss put it, "I'm glad he's here. He may be a freak, but he's the real thing." She went on to say, "It seems a certain generation wants Dylan to satisfy their hunger for a great artist by putting the music in a technical context, but what about personal, subjective, frank responses to the music in immediate personal terms? How does a younger audience respond to him with an immediacy that exceeds a technical context?"

This seems a common thread among the audience, that a discussion just doesn't approach their connection and reaction to Dylan's music. Donald Elfman said, "You know, I have mixed feelings about panels - they tend to belabor the point. Talking about Dylan this way seems slightly ghoulish."

Panelist Bob Levinson said he was looking forward to hearing how Dylan would play the songs from the album, how they'd juxtapose with and evolve from the record. Two nights later, Dylan played a show in Duchess County, 80 miles north of New York City. The show was incredible; more than just seeing a legend, we were also seeing a tight, fantastic, completely present rock show. And I myself saw more than one member of the KGB audience at the show, rocking out to the music.