Fade To Blonde, Max Philips; Dutch Uncle, Peter Pavia; Slide, Jason Starr; Suzanne Dottino w/ HCC authors and publisher, Charles Ardai On April 22, 2007 four authors from Hard Case Crime read at KGB. Sorry to post this blog all of two weeks after the event; I wish I could say that I was in the joint, or pistol-whipped, thrown in the trunk of a car, and held for ransom, but, unfortunately, you've caught me dangling on the petty crime of procrastination.

Over the past four years, Hard Case has published an impressive line-up of pulp novels by top-shelf crime writers. When asked to sum up their series in three words, Charles Ardai and Max Philips shot out, "Make No Money," but then quickly retracted the statement for a new one, "Fast, Cheap, and Out of Control." Even though the second is more than three words, it's a keeper, since 2008 will mark the 50th title of their famous hard-boiled paperbacks with those lurid covers gussied-up to look like old dime-store Mickey Spillanes.

Jason Starr, Peter Pavia; Olena Jennings, Felicia Sullivan, Bess Lovejoy; Max Phillips, Charles Ardia, and fans; Diane Ruengsorn, Stephen Byler
Charles Ardai, publisher of the Hard Case series, knows something about the iniquities of man, but when asked if he himself has ever committed a crime, gave a suspiciously dodgy answer. "Does murdering a hobo count?" He may not have lifted a few wallets on the way out, but he did sell some books. He looks more like a white collar criminal to me.

Max Philips, co-founder of Hard Case and author of Fade to Blonde, a 1960's spy novel pastiche, often finds himself under deep cover - but that's the life of a man who writes under two names, penning literary and pulp novels under Philips, and spy novels under Forrest Devoe Jr. Actually, he mentioned before the reading he has three names, but I unfortunately, unlike his hard case heroes, couldn't uncover this third alias. Does he have trouble keeping track of who he is on any given day? Does Forrest like his eggs poached, and Max prefer them scrambled? Max says, "It's like being in drag, you assume a different personae while writing, and your instincts are different." He writes both genre and literary novels, but takes particular joy in immersing himself in stylistically rich pulp fiction, where, as he puts it, "the voice really leads you through the story."

Jason Starr read from Slide, a second book (Bust is the first) he co-authored via correspondence with the great Irish noir-poet Ken Bruen. Starr said they swapped chapters over the internet, and often found themselves caught in a deadly game of one-upmanship, killing each off other's characters.

Peter Pavia, dressed in jeans, a black blazer and a tuxedo shirt unbuttoned at the top, with a couple days growth on the cheek, definitely looked the hard-boiled part. He paid touching tribute to his wife: "Behind every great writer is someone with a real job." His reading revealed a particularly impressive knowledge of rock cocaine or at least what it might feel like to be a man who after nearly being nailed by a nemesis in his own apartment crawls along the walls, keeping cover just below the windows, determined to get at the fresh bag of crack in his refrigerator because it's a lot better than the crumbly bag of rocks currently in his hand. Who hasn't been there? After surprisingly little arm-twisting, Pavia confessed to once being a used car salesman, and to brushing elbows with the mafia in Buffalo, New York. His book Dutch Uncle is a gritty, brutally funny Florida noir, like old Elmore Leonard. 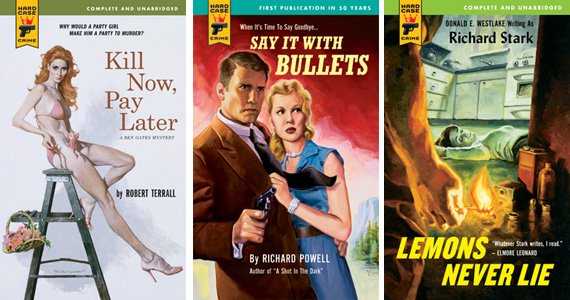