Vendela Vida, Ken Kalfus; David Wain, Zandy Hartig, Ken Kalfus2.4.2007: Sunday! Sunday! Sunday! KGB hosted a full-contact, no holds-barred championship reading between Vendela Vida and Ken Kalfus. They met on the field with their fans cheering them on wildly from the sidelines. It was truly amazing to watch and hear two of America's most muscled and aggressive writers duke it out in those adorable shiny pants that can't not make your butt look good. It was intense and violent and it was pretty much a miracle that nobody got hurt.

Vendela read a passage from her latest novel Let the Northern Lights Erase Your Name, a unique and poignant story about a young woman named Clarissa who journeys to Lapland to search for her father.

Ken struck back with a reading from his latest book A Disorder Peculiar to the Country, a novel that chronicles a brutally bitter and funny divorce that unfolds in the wake of 9/11.

An Interview with Ken Kalfus 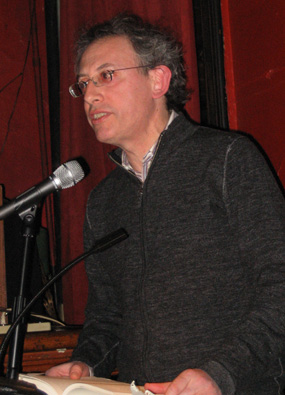 Ken Kalfus Ken Kalfus is the author of the short story collections Thirst and Pu-239 and Other Russian Fantasies, both of which were New York Times Notable Books. A finalist for the PEN/Faulkner Award and a winner of the Salon Book Award and the Pushcart Prize, he has written for Harper's, Bomb, the North American Review, and the Voice Literary Supplement.

KGB: Your most recent book, A Disorder Peculiar to the Country, takes place in the aftermath of 9/11. Were there any negative reactions to the fact that you set what is really a very funny story in the wake of such a tragic event?

Kevin Kalfus: There's been almost none. There's been a few comments...I really do think it's a pretty tolerant society at this point. I first wrote the first chapter in the fall of 2001. There was some response then, but now people are very willing and very tolerant of other ways of looking at 9/11. And anyway, if people or critics really hated it, they would find literary reasons to put down the book.

KGB: Has any of your other work involved real-life events in the same way?

KK: My previous novel was set in part in the early part of the 20th century in Russia. It involved the death of Tolstoy and also the death of Lenin and the Russian Revolution, so I drew from history there, and I made a lot of stuff up. And my short stories I also think have that. So yes, I sometimes take from current history or past history, take things from my own life and distort them in various ways. History is very useful for finding stories. Obviously there is great literature that does not involve history of current events. I hope to write some of that myself.

KGB: Are you going to go back to short stories anytime soon?

KK: I've just finished a short story and I'm working on another one right now. And I hope it will be good.

KGB: I'm sure it will be. Is writing a short story a breather from writing a novels or is it pretty much the same?

KK: No, it's different. The nice thing about short stories is that you can see the whole story in one shot. With the novel you don't really see it. And the gratification is being done in a period of months rather than years. 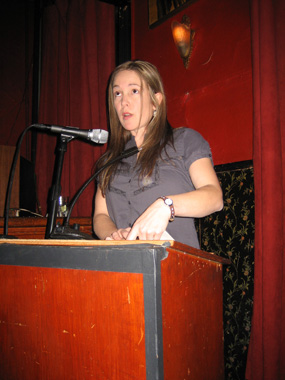 Vendela Vida Vendela Vida is the author of the nonfiction book Girls on the Verge and the novel And Now You Can Go. She is the co-editor of Believer magazine and is a founding board member and teacher at 826 Valencia, a nonprofit youth writing lab in San Fransisco.

KGB: Your writing tends to focus on women in their 20's or younger who are discovering themselves and their place in the world. Why are you so interested in younger woman and what they're going through?

Vendela Vida: I think because identity is such a fluid thing at that age, especially when you're eighteen, but also when you're twenty-one or twenty-eight. I've also been interested in periods of change and transformation and that's why I wrote the novels with an episode at the start that kind of catapults the narrators into a new emotional terrain and also a new physical terrain. I'm not someone who's interested in writing about people going through their daily existences. I like reading books like that, but it doesn't interest me as a writer. Or maybe I'm just not very good at it. I like to see people being taken out of their usual circumstances and being put into something completely foreign to them. That was obviously a theme in the non-fiction book, Girls on the Verge, as well. And I don't mean to do it, but every time I write a book I write about people six or seven years younger then I am. So as I grow up my narrators keep getting older, but only by certain intervals. For the next book I'm working on the protagonist is in her mid-fifties so I've finally grown up.

KGB: Do you find it more difficult?

VV: It's actually really liberating. I think the weird thing about having written a couple of books is that everyone says "oh, is it easier?" but I think it's actually kind of constraining because you think, "Well I've done that, I've done that. I can't set another novel in Lapland, I can't set another novel in the Philipines," and you start understanding why certain writers like Richard Ford or Philip Roth might enjoy writing about the same characters because they've invested so much emotional energy and spend a lot of time figuring out who those characters are. For me it's more of a conscious choice. I don't want to write about young women anymore, I want to write about this older woman and try to get it from that perspective. After that I'll write from a man's perspective and keep kind of challenging myself.

KGB: Getting to your recent book, why Lapland?

VV: My mother is Swedish but she's from the southern part of Sweden and when I was growing up I heard stories about Lapland because she had a cousin who had married a Sami priest - the Sami are the indigenous people of Lapland.

I always had a fascination with Lapland because it was a very mystical culture to me and the landscape seemed really mystical - the fact it was light all summer and dark all winter. It just rooted itself in my mind as a place that was a very fairy-tale like landscape, and so I knew that I wanted to set a book up there at some point.

When I realized what Clarissa's back story was going to be I thought that this was the book I wanted to set in Lapland because I thought that the physical landscape would mirror her emotional landscape. It's very bereft, harsh, cold, dark, and that's what's going on with her internally.

KGB: How much time did you spend there?

VV: I went there once during the summer to work at the Midnight Sun Film Festival. It didn't really do it for me in the summer. It was light out all the time, people were partying so hard that after two days I was so exhausted and just oppressed by the sunlight and the heat. When I went back in the wintertime I knew that was when I wanted to set the book. I took notes on that trip and then I wrote the book and got halfway through it and I didn't know what was going to happen next - I deliberately try not to think ahead and figure out what's going to happen next because I want the story to originate more organically from the character. So I was halfway through and had no idea what was going to happen next so I went back with a friend of mine who was Norwegian who acted as a translator and a travel companion. That was a really useful trip because I traced Clarissa's journey and a lot things that happened to us on that trip ended up in the plot of the book. For example, we found ourselves in the home of a Sami healer, this woman who was ancient and amazing and amazing looking. She served me reindeer meat and reindeer blood and that could not not go in the book.

VV: It tastes like you have a bloody nose on a really cold day and it gets in your mouth and it's salty and alkaline and it tastes like batteries.

KGB: So they just drink it straight?

VV: It's a healing method. It's not something they serve in restaurants. It's a very strange thing to drink it and I don't think most Sami's drink it on a regular basis.