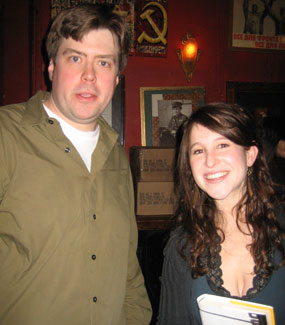 Yael Goldstein reads from the beginning of her novel, Overture.

Kevin Shay reads an excerpt from The End As I Know It.


**This evening's reading will be available soon on podcast. Please stay tuned!**


**Subscribe to KGB BAR Reading Series podcasts in itunes by clicking here; or by copying and pasting:
feed://feeds.feedburner.com/kgbbarlive into your favorite podcast application (iTunes, Thunderbird, etc.) In iTunes, simply go to Advanced, then select "subscribe to podcast," and paste in the url above!

***FIND OUT ABOUT OTHER KGB BARPODCASTS THROUGH OUR AUDIO BLOG OR AUDIO RSS FEED.

KGB: What can you tell us about the genesis of Overture? 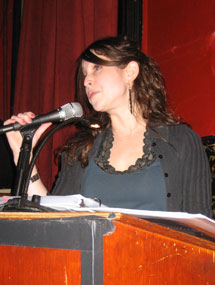 Yael GoldsteinYael Goldstein: The idea I had for it came because I have this obsession - going back to my adolescence - with books and plays and movies that deal with this theme of art versus life; this question of how much of your happiness, how much of the richness of your life are you willing to sacrifice for some sort of artistic greatness. And I always found this a very interesting question. My attitude towards it changed as I matured. First I thought it was just obvious and of course you give up anything for the chance of artistic greatness. Then as I matured I started thinking, this is a kind of stark and absurd question and why the hell would you give up anything for this? I continued to be interested in it nonetheless and I wondered more and more as I aged, how would it be different from a woman's point of view - if the person obsessed with their art was a woman. Because women, you know, when they think about their happiness, other's people's happiness is often tied in much more closely than with men. Of course that's not always true, but especially if you're a mother. So what I wanted to do was write a book about a woman who was incredibly ambitious, took her art incredibly seriously - as seriously as any Thomas Mann hero; which to my mind is a little too seriously - but was also a lover and a mother and not terrible at these things. So that was the genesis of the book, and it took off from there.

KGB: And your mom is a writer too.

YG: My mom is a novelist.

KGB: And how did that influence you, in this sort of thinking?

YG: I don't know, actually, to what extent that influenced me. Certainly part of the reason I was so interested, going back to early adolescence, in this question of art versus life is because my mother was someone who took her art incredibly seriously and was a wonderful mother at the same time.

KGB: Which is hard.

YG: Which is very hard to do. While I was writing the book, I started thinking more and more about, what does it mean, really - how do you be such a wonderful mother and a wonderful artist. I started to think that my mother had become a better mother because of her devotion to her art and a better artist because she loved her kids so much and part of what I try to explore in the book, at least towards the end, is the possibility that these things actually enrich each other, rather than take away from each other. So in that sense, my mother's career had a big influence.

KGB: So you would recommend artists to have children to help the work along?

KGB: Your novel deals with a bunch of very ambitious, accomplished musicians. Are you a musician yourself?

YG: I'm not a musician. I played the piano extremely poorly through much of my youth, and I sang very briefly in a capella groups and then I found I hated a capella. So I really had very little musical background and I just did a ton of research for the book. Before I even started writing, I spent about six months just researching what it would be like to be a traveling violinist, a solo violinist. I'm very lucky that I have a bunch of friends who are professional musicians in the classical music world, and I have friends who are composers. So I was able to ask questions when my research ran out; or when I thought, what are you studying at this stage of your development?, I could ask my friends and they would tell me. But I was really kind of flying by the seat of my pants on this one.

KGB: You went to Harvard to do a philosophy degree. How did your degree in philosophy influence your writing or your thinking about writing?

YG: I have a lot of friends in philosophy - I sort of serially date philosophers - so if people ask me if I can see any philosophy in this book, I sort of joke, but I think it's true that the way my philosophy background shows up in the book is that there's no bad pseudo-philosophy in the book. I feel that that's very common, especially in literary novels, there'll be this thing about time or this or that. I don't have that. I think that's how my philosophy background shows up. Other than that, I'm not sure; to any degree that my philosophy shows up, or my academic background shows up, I think it might hurt me more than it helped me. When I first graduated college, I had to sort of unlearn philosophy to get back to fiction. I wanted to make an argument, follow this very linear pattern. You don't do that in fiction. It makes for terrible fiction!

KGB:What are you working on currently?

YG: I'm working on a new novel that I've been researching for three years. I've taken on something I know even less about, brilliantly! I'm about a quarter of the way through. It's about this woman who marries into this very clannish, dynastic West Virginia family. They really have a stranglehold on the politics and finances of this small little region. She's not at all accepted by them, they can't stand her, she's an outsider. Partly to win their approval, and partly because she has nothing to do with herself during the day, she decides she's going to collate all of the primary documents littering the attic of the ancestral home, where she's now living, and write some sort of history of the family in the region, in particular focusing on this mythic ancestors of theirs - one of the first settlers, an early abolitionist, this all around fantastic guy that they stake a lot of their political cachet on. And of course she discovers this seemingly devastating fact about why he came to the region, which is not at all what they thought. So part of the book is the fallout of this discovery, both for her and her family, how her sense of herself changes, the practical ramifications. And then the other part of the book, that sort of weaves in and out, you go back and you see what actually happens with the ancestor and of course they are nothing like what she's uncovering and it's also nothing like the received wisdom. And there are these two love stories two hundred years apart that are interweaved.

KGB: Kevin, tell me about the very beginnings of The End As I Know It. 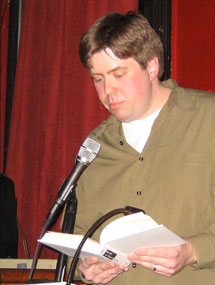 Kevin ShayKevin Shay: In 1998, when the novel takes place, I became a little worried about Y2K. I was working as a computer consultant at the time, and sort of caught this anxiety - not to the same extent that the character does - but I got a little wrapped up in it for a little while. It came and went, no disaster. A couple of years after that, I was sort of looking back at this period and it seemed like an interesting moment in our cultural history which was really only a few years ago; at the time I was writing the book, it seemed like a lot longer.

KGB: And now you've written a novel. What's the difference, for you, between writing for the stage and writing a novel?

KS: I think that one of the main differences is that with a play or musical or screenplay, what you write is not the finished product; it's sort of a blueprint for a performance, or production, which means you're depending on someone else to interpret whatever you've written. I think that's both good and bad. It's good because collaboration can be great, and it can drive you forward to complete something, but I think the reason I turned to writing fiction is looking forward to the fact that whatever I wrote would be a work of art that exists in and of itself as opposed to having to wait for actors and directors and cross your fingers and hope they don't screw it up.

KGB: You also worked for McSweeney's for awhile, and you edited their anthology, Created in Darkness by Troubled Americans. Can you tell us about that experience?

KS: Working for McSweeney's was great. I started as the web master, just doing the technical side of things. That was in 2000, I think, maybe 99. At some point Dave Eggers was getting very busy, obviously, and didn't have time to do the day-to-day editing of the site anymore, and I took that over as well. I really enjoyed it. I loved reading submissions and working with authors and seeing what needs improvement, putting together a blend of different types of humor, and even some non-humor things we were doing at the time. I would probably still be doing it, but I realized I wasn't spending much time on my own writing.

KGB: And what are you writing now?

KS: I'm working on a new novel. It's contemporary; it takes place in New York over the course of a long weekend. There's a secret that's shared by four friends from college ten years ago, and the secret comes to light over the weekend. It's kind of multiple perspectives, shifting viewpoints.