Nick Antosca, Ned Vizzini, Noah Cicero, Tao LinIf Saturday's reading at KGB, which featured four authors who reportedly "might never be in the same room again," is not to be repeated, then bully for those of us who were there. All four members of the "young anxious writers of the internet" - Ned Vizzini, Noah Cicero, Nick Antosca and Tao Lin - turned in great performances.

Ned Vizzini read a raunchy selection from an upcoming work, his first adult novel in more ways than one. Despite an abundance of bodily fluids, Vizzini's work maintained its characteristic gentle charm, with Vizzini's impeccable comic timing keeping the capacity crowd in stitches. What can I say - he had me at "'You're just a dirty Jewish boy with a big nasty cock.'"

Noah Cicero followed with more serious fare, reading from two poems, both riffs on obsession. A clearly-nervous Cicero's performance underscored "A Strange Fear" even as he read it: "I look down at my nails/They look like they need to be cut/I can't cut my nails that will hurt/But I have to cut them/But it might hurt." Still staring down, Circero also read "The Italian Princess," which featured similar thought cyclics - "did I do that/was it done by me" - against a backdrop of poverty. Cockroaches flitted in and out of the piece, their indestructible presence symptomatic of all that is foul and wrong with being poor - and the complicit society that allows it. 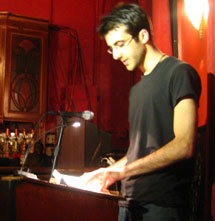 Nick AntoscaFires is Nick Antosca's soon-to-be-released novel, which tracks John Danfield's relationship with the mysterious, damaged, Ruth. An intimate, sleepy scene turns electric as John discovers fresh bruises covering Ruth's body. John's rage smolders, and Ruth's evasiveness turns indignant, but you'll have to buy Fires to find out who hit Ruth, and what, exactly, burns. Instead, Antosca read a second excerpt, in which a dreaming John meets a pink, featherless seagull, which informs him, "John, the people you eat are the regrets that you shit."

As Tao Lin began reading, in his signature monotone, I questioned the order of the lineup, as Tao didn't seem to be the ideal finale. Yet after the four poems he read, with nary a tonal modulation, I applauded the choice. His poems strike the nerve where black comedy and devastating criticism converge uncomfortably, brilliantly. From the title of his book of poetry, "You Are A Little Bit Happier Than I Am," to his introductory remarks, "I'm gonna read some poetry," the audience winced and laughed in turn, and nobody knew whether they were doing the right thing at the right time. From the depressing "I know at all times that in four hours I'll feel completely differently," to the absurd, "In an insane killing rampage I believe lonely would survive by digging a hole," Lin capped off a remarkable night of remarkable authors.