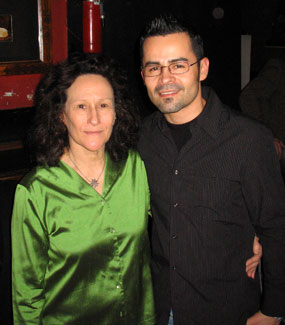 Lynne Tillman read a passage from her latest novel, American Genius: A Comedy. The book centers around an unnamed female character who obsessively examines both the profound and mundane aspects of life in a hilarious, insightful and often uncomfortably recognizable way.

James Cañón read a section from Tales from the Town of Widows that contained one of his many very unique characters and the humor and wisdom that runs through his book. 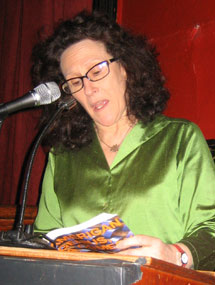 Lynne TilmanLynne Tillman is an Associate Professor/Writer-in-Residence in the Department of English at the University at Albany. She is the author of four novels, two collections of short stories, one collection of essays and two nonfiction books.

KGB: American Genius: A Comedy begins with the main character talking about the deaths of her pets, a cat and a dog. Why did you choose that as a starting point?

Lynne Tillman: One of the things that motivated me to write this novel was sensitivity. Everyone seemed to be getting more and more sensitive to the environment, lactose intolerant...and sure, the environment is awful. But I thought at the same time, no one seemed more sensitive to other people. And one of the things that we all feel very strongly about is the animals we have. There's a sense of attachment to animals, a kind of love that's more pure than any love that you feel for anyone else. So there were a lot of different things that I could do with that subject. I think anyone reading the book would have their own experience with having an animal or with not having an animal or something that died that they loved. And how people are cruel to other people and to animals. People's cruelty is shocking.

KGB: You collaborate with a lot of artists and you've done many multimedia projects. Can you talk about one your particularly proud of?

LT: Each of them has been so different...I wrote a story in which Clint Eastwood appears because the artist I was doing it for had done a performance in England dressed as Clint Eastwood. To me, writing the story in which the narrator gets to have a dialogue with Clint Eastwood at this bizarre masquerade party was just a lot of fun. And the funniest thing is that every time I read it aloud so many people come up and think that I've actually met and talked to him. So it was just a thrill to finally get my fascination about him into writing, because I am fascinated by him. I love him.

KGB: Have you tried to get your piece to him?

LT: And, in fact, somebody that I know cast a film for him, and they sent it to his agent, but I don't know if he ever got it. I did want him to read it, though I do say some very strange things in it. I have him have a father that digs a big hole in the backyard and lives in it for five days. Obviously I made it up, and he might not like that. In any case, no, I never heard anything from him.

KGB: Why did you tack on "A Comedy" to the title of your book?

LT: Well, I went back and forth about that. Comedy of course plays off tragedy...I didn't know if people would get the sort of amusement in American Genius. I wanted to push that play. And there was American Psycho, American Pastoral, there's America this and America that and I sort of was worried about that, so I needed to separate it.

LT: Right now I'm working on a story for a catalogue that's going to be part of an exhibition at University of Albany museum. The curators have put together a show on American presidents. A lot of contemporary artists have done portraits and paintings and all sorts of things about presidents. I'm writing a story now, a Madame Realism story, who's a continuing character of mine, for that. I do know what I want to do for my next novel and it sort of works with history. It's a 19th century character and a psychoanalyst in the 21st century and their obsession with the 19th century woman photographer. I want to think about photography also, and I don't know how I'm going to do it yet, but that's sort of what's in my mind.

KGB: Are you a photographer?

LT: No. We're just an image-ridden culture, and what does that mean? What has photography done to us? And what are these images that keep multiplying? We are a much more visual culture then we are a culture of the word. So I want to think about that. 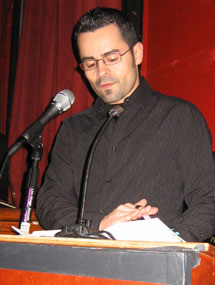 James CañónJames Cañón received his MFA in Creative Writing from Columbia University. He was awarded the Henfield Prize for Excellence in fiction, and was one of three finalists in the inaugural cycle of the International Rolex Mentor & ProtÃƒÂ©gÃƒÂ© Arts Initiative. His short stories have been anthologized in literary journals and he recently completed his first novel, Tales from the Town of Widows.

KGB: Tales from the Town of Widows is written in the third person, but you write a lot from women's perspective as well as men's. Did you find that switch difficult?

KGB: Has your book been published in Colombia?

JC: No. It's going to be published in seven different languages and Spanish is one of them, but I don't know exactly where it's going.

KGB: How do you think it would be received in Colombia?

JC: You know, I've asked myself that question. They kind of want everyone to write beautiful things, especially now that they have this campaign to present Colombia better to the outside, so that worries me a little bit. But I think I'm doing justice to what it is, especially because my intention was to give voice to women, not only Colombian but Latin American, so I think I accomplished that, and that's the most important thing.

KGB: Did you know that you wanted to write about - and these are not your words - the violent leftovers of war? Was that a starting point for you?

JC: Yes. The whole thing started from reading the newspaper and seeing an article about this town in Colombia where the men had been taken away by guerillas, but the whole article was completely angled to men. You know - what happened to the men, the men had been taken away, the men were going to die, whatever? But you know, what's going to happen to the women who are left behind? Women in Latin America are so dependent on the men, but they are also very strong and I knew they were going to survive, I just didn't know how they were going to go about it.

KGB: Do you think there would be a big difference in the world if women were in charge of their communities and government, or do you think that ultimately men and women would make the same decisions?

JC: It would be different. My claim here is not that women would be better or worse, but that they should be given an opportunity. In Colombia, in Latin America and everywhere else they haven't been given the chance, they should definitely be given a chance. I think women have qualities that would be great if they were used in politics. A women in Colombia can get so much food for her family on a very small budget, and I'm sure they'd do something right if they can manage that.

KGB: Do you consider yourself to be a South American or Latin American writer who is coming from a tradition influenced by writers such as Marquez? You're a very unique writer and you're clearly doing your own thing, so perhaps that comparison frustrates you.

JC: I am definitely coming from that tradition, if not by reading him but by reading the people who influenced him or the people who have been influenced by Marquez. However, I would like to consider myself more of a member of - and this is a new category that I'm creating - a new community of writers who are writing in their second language. And it's not only in English in Latin America, but also in Canada, in France writing in African languages, also in Israel writing in Arabic...There are so many people writing in languages that are not their own and that I think this deserves a category, because once you write in a second language it just makes difference. You are an outsider and you have an outsider perspective and that is a different flavor, a different concept altogether of what you're talking about.