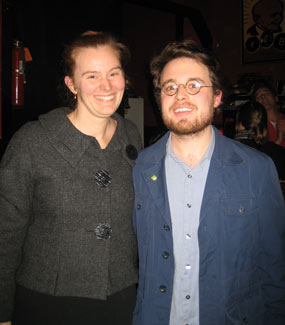 Ellis Avery & Joshua Cohen1.21.07: KGB Bar hosted authors Ellis Avery and Joshua Cohen. It was a fun evening of writing that was heavy on emotion and cultural reckoning.

Ellis Avery is a poet as well as a writer of fiction and non-fiction. Her work has appeared on stage at New York's Expanded Arts Theater and in print in Publishers Weekly, Kyoto Journal, and the Village Voice. In 2001, Three Lines, One Road, a year's worth of daily haiku exchanged between Avery and Melissa Demian, was a finalist in the National Poetry Series. She is also the author of a nonfiction book The Smoke Week, an award-winning personal account of life in Manhattan after 9/11.

Avery read a steamy (pun intended) scene from The Teahouse Fire, her new novel. The section began in a Japanese bathhouse, where the adolescent female protagonist confronts her new body and then engages in a conversation about sex that turns into a bit of a demonstration.

Joshua Cohen lived for a time in Prague and worked as a journalist throughout Eastern Europe. Cohen now lives in Brooklyn. His essays appear regularly in The Forward. He read from his book: Cadenza for the Schneidermann Violin Concerto.

He started at the beginning of this rantish story, infusing his words with the same frenetic passion as his character did on the page. 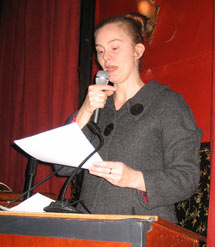 Ellis AveryKGB: Aurelia, the main character in The Teahouse Fire, is a French-American girl who moves to Japan. That's a really interesting combination of cultures. Do you have personal connections to these cultures? If you don't, why did you chose that particular mix?

Ellis Avery: Well, I've studied both French and Japanese, so I had them in my head when sitting down to write. What was important to me was to have a character who was already destabilized in terms of language, who already had that kind of flexibility built into her way of living.

KGB: How did tea ceremonies become such an important part of the book?

EA: I've always loved tea, even from childhood - there's a picture of me pouring tea when I was about three, so people are always giving me tea things. Then a friend suggested that I go see the tea ceremony at the Met. And then when I was in Japan I went to see tea ceremony there.

And while the tea ceremony itself was a little boring, the architecture involved in it is sublime, and the very fact that you would build a house and a garden expressly for the purpose of sharing tea was extravagantly beautiful to me, and it sucked me into a world of total beauty.

I studied at The Urasenke Tea Ceremony Society in New York, which is a building that used to be a carriage house and then Mark Rothko's studio. It has a skylight, under which is a Japanese garden and is surrounded by beautiful Japanese rooms It's like a museum except you get to touch everything and use everything. It was a very seductive aesthetic world for me.

KGB: Were you able to practice tea ceremony in Japan?

EA: I did an intensive program for foreigners for five weeks. You're up at five thirty in the morning to put on your Kimono and you are down at ten at night having scrubbed out all the linen tea clothes. It was like boot camp. It was really hard-core, and perhaps I didn't love it at the moment, but I love having done it, and I think it gave me a real grounding.

EA: I'm working on promoting this book, but I do have a project that's beckoning me. I've put a little time into it and just can't wait to sink in to research stuff. It's about Paris in the 1920's. It's a fiction project. And more than that...I need to not say for now. 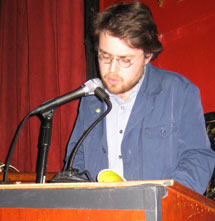 Joshua CohenKGB: You framed Cadenza for the Schneidermann Violin Concerto as speech/story told in the middle of a performance. Did you always know you were going to write it that way, or did the story come first and then the frame later?

Joshua Cohen: Well, I was listening to a lot of cadenza's and there are these moments where it has nothing to do with structure whatsoever, when people just let loose and they play and it becomes less about idea then physicality. I always wanted to make a book that was physical in that sense, that had less to do with what was said then how it was said and the feeling of the speaker while he was saying it. When I talk I tend to think about how I feel more then the words that I'm picking, when I'm at my most honest, at least. I said 'I'm going to write it like a cadenza so why don't I call it a cadenza.' And I did. So really the music came first and then the words.

KGB: Are you a musician or do you come from a musical background?

JC: I earned a living in high school playing guitar in Atlantic City casinos and restaurants, but other than that, not really. I'm an excellent listener.

KGB: Did you do a lot of research for the book besides listening to cadenzas?

JC: I probably read over one hundred books for this book. There's a section in the book about violin making, so I read a lot about that. And I read a lot of composers' memoirs. Composers' memoirs are brilliant. They live great lives. They're in a different town every night, with different women every night. There are drinks on the table, warm beds in elegant hotels. So it came a lot from that lore. And when musicians take a break, when they "take five," and sit around smoking cigarettes they always end up trading stories, so there's that verbal element too.

KGB: The relationship between the two artists in the book is very intense. How did you develop it?

JC: It's an interesting idea that I've always had about the differences between a performer and a composer. It's essentially the difference, in my mind, between a reader and a writer. The relationship is interesting because here's a guy who's dedicated his life to advancing the other person's art and that relationship is strange because there's power involved and ego involved and yet at the same time they have lives away from art so they have their own personal relationship, which is to say they're old, they are culturally marginalized and they're lonely. I think that old age is a time to become less of an animal and more human. Sexual relationships are gone, you have relationships with women that aren't based on sex, friendships with men that aren't based on competition. And suddenly age becomes a subject.

KGB: You have two more novels coming out. Can you talk a bit about them?

The second one, Channel, is basically a thriller set half in Russia and half in Los Angeles. When I say thriller I probably mean not a thriller. I hope that Channel is sold exclusively in run-down, third world airports. It's that kind of airport book thriller, but it's that airport book where the planes never leave. It's about a Russian over-dubber for Russian state television who sees an actress when he over-dubbs a show, and when her show airs he decides to leave Russia to go to Los Angeles to have this sitcom actress.