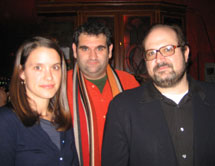 NELL FREUDENBERGER, JORDI PUNTI, SAM LIPSYTEKGB's Sunday night fiction was at its finest with electrifying readings by Jordi Punti, Nell Freudenberger, and Sam Lipsyte. If you are reading this blog because you missed the reading, I am sorry - it really cannot compare. Jordi Punti, read several lines from his novel in progress Lost Baggage in his native Catalan before handing the English translation and the mic over to actor Boris McGiver whose reading was so charismatic and well-paced both Freudenberger and Lipsyte asked in jest if they could borrow him. Lost Baggage is the first-person story of a young man who has discovered that his father, a truck driver ever-on-the-leave, has sired three other sons in three European cities along his routine truck route. Punti's wit is elegant and distinct, with a genuine trace of tragedy. He writes, "Now all our childhood disappointments are multiplied by four". This is only one of many of Punti's sentences that lifted our hearts and seemed to hold them in mid-air.

Jordi Punti, Boris McGiver, Susan Chi, Suzanne Dottino, David Rogers, Nell Freudenberger, Sam LipsyteNell Freudenberger followed Punti with an excerpt from her novel The Dissdent, which follows a celebrated Chinese performance artist Yuan Zhao throughout his various learning and teaching experiences as an artist's resident in America. With a subtle, firm, and confident voice, Freudenberger spellbound the crowd, causing us to reflect on the identity of the Artist and the chaos of American education.

My stomach is still hurting from having laughed so hard at Sam Lipsyte's reading. He first read Expressive, the brief yet classic account of a wayward family man. Lines like "She's kind of dykey, like I like them; has her own darts for the dartboard" read in Sam's hilarious, churlish bravado made us buckle in hysterics. But this story was only a sneak peak into the laughter that was brought on by Sam's reading from a story about a wacky male doula who forms a sinister obsession with his employing family, the Gotwalds. Lipsyte earns the greatest laughter a reader can hope for - one so furiously hearted that he has to wait for the audience to finish before he can go on.

**Subscribe to KGB BAR Reading Series podcasts in itunes by clicking here; or by copying and pasting: feed://feeds.feedburner.com/kgbbarlive into your favorite podcast application (iTunes, Thunderbird, etc.) In ITunes, simply go to Advanced, then select "subscribe to podcast," and past in the url above! *** 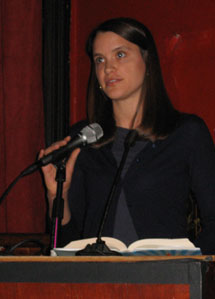 Nell FreudenbergerKGB: You read tonight from your book The Dissident. The passage very realistically captured aspects of life in an exclusive girls' school. Have you ever taught in a girls' school like the one you describe?

NF: I have never taught at a girls' school but I went to one. I teach at a co-ed high school and I think it is a lot healthier.

KGB: One passage that really stood out is the part about the girl who paints a lobster with eyelashes. Tell us more about that.

NF: When I was 16 I went to a school like this and we had a Chinese artist come visit. He was going to teach us to paint with ink. He didn't speak English, so our classes were silent. He taught us first to paint rocks, then if you mastered rocks you had to paint bamboo and finally you got to paint a lobster. I think I remembered him when I wrote this book because he was the first person who said to us in any kind of art class, "that's wrong." Even though he didn't say it with language, he would tear off our sheet and make us do it over again. Before this, we had been taught to express ourselves and to be creative. His approach was really appealing to me, that you could learn; that there was a place to start.

KGB: How many false starts do you typically make when you are writing?

NF: Most sentences, I would say. I'm definitely someone who writes a lot of pages and throws a lot away.

Sam LipsyteKGB: Are the stories you read tonight, "The Wisdom of the Doulas" and "Expressive" part of a collection you're working on?

SL: I'm working on stories but I'm also working on something longer and right now I'm trying to figure out which needs to be thrown away first.


KGB: Take a phrase like "thick burgundy nipples" from the Doula story. Where does that come from?

SL: I don't want to look too closely. I'm just happy when it comes. A lot of it is liking the sounds of words in combination. I'm always looking for a way to pull what I've just done into the new sentence, into the new moment.

KGB: You're talking a lot about language. Is that how you start, is that what gets you going?

SL: I think that's what gets me going but then of course meaning gets generated. We want to know the narrator's stand on a word, what it means for him to utter it, because it's kind of about the utterances of the narrator, especially if you're writing in the first person.

KGB: What about feeling?

SL: Well, I think feeling gets generated that way, too, but often if you follow the sentences, if you let the language play, you get to stuff, you get to certain kinds of feeling and certain kinds of meaning that you might not have gotten to just sitting and trying to think of it all beforehand.

KGB: After you've written something do you go through it and take a lot out?

SL: Oh sure, there's a lot of revision. I've always felt that I don't really like writing that much but I do like revising. That first draft is usually a gruesome experience, but it gives me something to play with.

KGB: How do you know when you're done?

SL: As the philosopher Charon said, "You're never done, you just turn away in disgust."

KGB: Tell us about the genesis of the idea of the four brothers in your book Lost Baggage.

JP: I had two ideas in mind. One was the story of a man who has different children in different parts of the world but decides to name them with the same name, but I didn't know why. I had to write the novel to find that out. The second thing I was playing with was how Europe was in the sixties -- all the flower power, swinging London, hippie things, in opposition to Spanish society under the Franco dictatorship. Then, Barcelona was a sad place, there was nothing. A few people could go to Paris; occasionally they would bring back forbidden books.

KGB: How important to you was the rhythm of your native Catalan language as you wrote this?

JP: It's very basic, the rhythm. I never finish a sentence without reading it out loud, and I realize there's a good rhythm in it, almost metered, like a poem. I think the sentences in a paragraph should have this rhythm in them. The good thing is that you don't notice it too much, but it has to be there. I think this is well preserved in the translation by Cheryl Morgan.

KGB: There is something very strange about the father of the four brothers - he shows no emotion.

JP: Exactly. He's a cold person. I wouldn't say he has no emotion, but the children only met him about a dozen times so they couldn't catch what the father really is. Through the voices of the brothers, what I want to give is a portrait of the father.