CLICK HERE TO LISTEN TO KELLY BRAFFET AND DAVID EVANIER 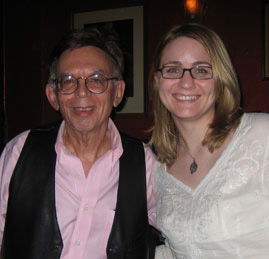 Though Kelly Braffet was technically "reading around a cough drop," her new novel, Last Seen Leaving, came across clear and strong. The story is of a lonesome, sandalwood-dabbing New Ager named Anne Cassidy, and her lone companion, Livingston (a geriatric cat). In her excerpt, Braffet elegantly dropped allusions to mammoth-sized back-stories whilst rendering emotionally charged scenes, such as the death of man known as "Basketball Belly," and the shocking ambivalence of others in the presence of his lifeless body. Such affect-ridden glimmers of her book piqued the listeners' interest, leaving them thirsty to hear - or read - more.

Then David Evanier took the podium, with a theatrical reading from The Great Kisser that rivaled the noisy production in the Kraine Theater below. A true storyteller, Evanier engaged his audience by breaking his excerpt into three parts: Tapes, Scraps, and Gratitude. The first section comically detailed the narrator, Michael, and his co-dependent therapist, Butinsky who, "has such awesome power; he doesn't even need to stay awake." The next section then swelled with the teenage retro-nostalgia of Michael's first love, and a kiss that tasted like "chili and Tabasco sauce." He captured the bittersweet age of party telephone lines-a world in which the narrator's "mother loved her new pink telephone; it gave her a reason to get up in the morning." Evanier concluded the reading on a high note: the "Gratitude" section. After the emotionally-charged highs and lows in both of the readers' stories, Evanier gave us a realistic ending as affirming as a breath of crisp air. -- Carolyn Wilsey 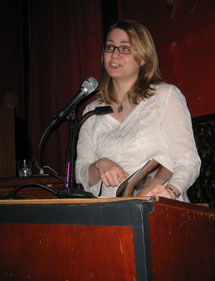 
KGB: What did you learn from writing your first book that helped you when writing Last Seen Leaving, your second?

KB: The biggest thing I learned was that the damned thing could actually be published. When I was writing my first book I had no idea that it was ever going to be a book. I got a two-book contract with that one, so with the second, the knowledge that it was going to be a book was a huge motivating factor. I also learned small things. In my first book I had a lot of people smoking cigarettes. I used it for dialogue gestures. So in my second book nobody smoked. And my first book was really episodic, so in my second I was careful to make the plot arc stretch over the entire book.

KGB: You seem very comfortable with the kind of close 3rd person point of view that you use in Last Seen Leaving. Did you write your first book that way, too?

KB: No, my first book was in first person, and it was really liberating to me to be able to write things in the second book that my characters didn't know about. I'd never written in the third person before and it was very satisfying. I recommend it!

KGB: Tell us about setting the story in Arizona and in Western Pennsylvania. Why did that appeal to you?

KB: Well, I was raised in Arizona until I was ten. A lot of the book takes place in Pittsburgh, which is where I spent the other half of my childhood. I think what appealed to me was that I could draw distinctions between the two places. Sedona is such a strange little town - an old frontier town that was suddenly swarming with crystals. It's interesting as a place people run away to, to reinvent themselves. As opposed to Western Pennsylvania, a place nobody ever runs away to or reinvents themselves. 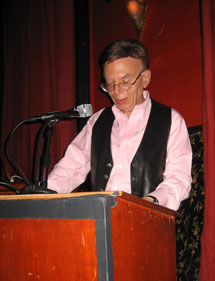 David EvanierKGB: Tell us why you chose to read the passages you did from The Great Kisser.

DE: I actually read these sections aloud and I evaluated them, because it's really a performance. I cut out a lot. That last section is about gratitude. That was pure impulse. I have a tremendous sense of gratitude for singers and entertainers and writers and I wanted to express it. I could have gone on forever about all the people I love who have helped me in my life and who have saved me. I do feel very lucky. The world is such a savage place - I don't know how it happened. And I feel a lot of gratefulness.

KGB: Is this a memoir?

DE: No, but it doesn't matter, really. There's a lot that's invented but there's a lot that's directly out of experience. You cross the line. If you do a pure memoir, an oral history, for example, it can be pretty boring. So I'm very selective.

KGB: It feels as though there's a lot of heart there; that you are very close to your material.

DE: Yes. I have a good friend, Eric Wilson at U.C.L.A., who was a colleague of mine when I taught there, and he said something that means a lot to me: trust yourself. Don't be ashamed, don't be afraid - it's true! No matter how far out it is, no matter how embarrassing it is, everybody has experienced it. All our lives are over-the-top. Nothing is alien to anybody.