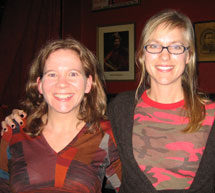 LISA MOORE, HEIDI JULAVITSCanadian author Lisa Moore arrived from Newfoundland only an hour before the reading. She read an erotically charged passage from her American debut Alligator. The novel is previewed on KGB Bar Lit. Her reading style was slow and controlled, giving the audience the opportunity to savor every word. Moore's reading included the memorable line, "His eyes were already open and she opened her eyes." Wholeness in life was quietly symbolized in searching for a matching lid for a Salvation Army sugar bowl.

Heidi Julavits, the founding editor of The Believer, read from her novel The Uses of Enchantment. After Julavits spoke about the trials of book tour, which included fighting the bookstore PA system as the parents of lost children were paged, she paused to reflect on the sound coming from on high (AKA the Red Room Theater.) 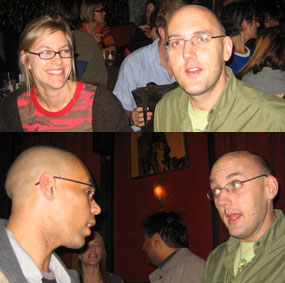 Heidi Julavits, Ben Marcus (above); Victor LaValle, Ben Marcus (below)When she commented on the "clogging," KGB owner Denis Woychuk jokingly corrected her from behind the bar. We were only hearing the bellows of bagpipes. In an unconscious effort to fight the noise, Julavits read a quiet funeral scene.

After 15 years, the protagonist Mary returns to her home town upon the death of her mother. Haunted by the aftermath of her own abduction, she deals with old relatives, old neighbors ("Ye Old Bastard" among them), and the stuff of funerals - itchy wool and salmon mousse on Triscuits. It is clear that drinking a cup of her aunt's grief tea won't suffice to stifle the memories that await her.

After the reading, the crowd was slow to disperse. The reading put everyone in a festive mood in preparation for the Thanksgiving holidays and the next KGB event. 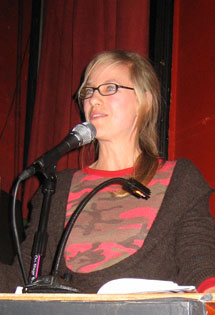 Heidi JulavitsKGB: In your newest book, The Uses of Enchantment, which you read from tonight, you mentioned there are three strands of the story. Why did you choose to work with that structure?

HJ: I was inspired by Tim O'Brien's In the Lake of the Woods. I wanted to write something that was a page-turner, in which you are compelled to look for the answer, but as you read, you may realize that the answer is not really the answer at all. Or maybe the question is not the right question. Or maybe it's foolish to think there's an answer or even a question. But at the same time, I think it can be read as a thriller type of book on a satisfying level.

KGB: It sounds as if the appeal for you as the writer starts with something intellectual - an idea, a structural concept, something that you find intellectually engaging.

HJ: I do tend to start with a conceptual/plot/structural idea. I have to work at finding the emotional heart of the story. That is harder for me.

KGB: Your dialogue is really funny-

HJ: I talk to myself!

KGB: Are you funny when you talk to yourself?

HJ: I'm hilarious! I'm so much funnier when I talk to myself than at any other time. I can't reproduce it when I talk to other people or when I write.

KGB: Are you working on anything new? 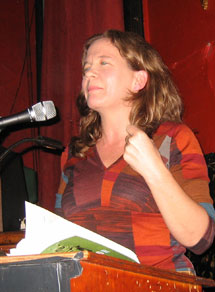 Lisa MooreKGB: You read from your novel, Alligator, which is set in St. John's, Newfoundland, where you live. Can you give us a sense of that place, which figures so importantly in the novel?

LM: Well, until the '70's, St. John's was very isolated. The are many little islands, called outports, reachable only by boat, and the mostly Irish settlers who founded it had their own subculture full of oral tradition, music and language. We even have our own dictionary with our own special idioms and slang.

LM: "Sliveen," -that's a ne'er do well, and "streel" is a slatternly woman, for example. All of this culture began to die out as the influences of television and easier access by air travel, for example, increased our congress with the rest of the world. The government's Folklore Department has made a big effort to preserve our traditions, and as of now, St. John's has become a cosmopolitan city full of artists and professionals, but also there is poverty, and people of all sorts live mixed together. It's a very interesting place.

KGB: The two words you chose are interesting, because they reflect some themes from your reading tonight. You talked about a woman with a misaligned face, a retarded bridegroom, and all sorts of people who have something "amiss," let's say. What is it about that that you find interesting?

LM: People have choices, no matter what their circumstances may be. There's an alligator in the book, too. Animals don't have the capacity to make moral choices, but people do. What interests me is what choices people make, what moral lines they are willing to cross in order to survive.