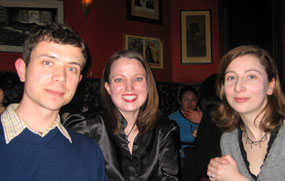 Ryan Effgen, Caimeen Garrett, Ellen LitmnanAn eager crowd gathered to listen to the crá¨me of the crop authors whose work was chosen to be in The Best New American Voices 2007, the only anthology devoted to emerging writers, guest edited by Sue Miller. The first author, having come all the way from Arlington Virginia, was Ryan Effgen. He read from his short story, "The Inappropriate Behavior of Our Alleged Loved Ones," which likely has one of the most satisfying titles of recent memory and includes an improbably erotic mention of pink Converse hi-tops. Despite some brutal subject matter having to do with domestic violence the story was quite funny. 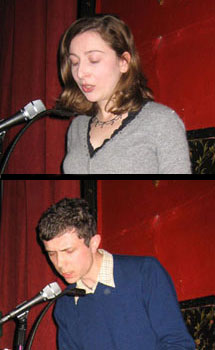 Ellen Litmnan warned us that her story, "About Kamyshinsky," featured a lot of Russian names and that she would therefore speak slowly. Fortunately, she read beautifully, and listeners were soon drawn into the story's corridors of the complex structure that consisted of three story lines interwoven into this realistic portrayal of Kamyshinsky's life. Notable lines (from memory, alas) included "You want tofu salad? Have some. You want your woman? Go to her."

Next up: Caimen Garrett. The audience was thoroughly entranced as she read from "The Temperate Family." The story featured a desperate father searching for his lost son (the work was inspired by the country's first ransom kidnapping, which happened in 1876). Tremendous public pressure prevented the father from ever having paid his son's ransom, and he never saw him again. His anguish, expressed in Garrett's story by a series of letters, was palpable.

The night's final reader (Dan Pope) was a no-show, but the crowd that spilled out into the cold November night seemed happy anyway. No doubt they were warmed by the brilliance of the night's talent, and looked forward to next year's installment of The Best New American Voices 2008.