Kelly Link & Shelley JacksonKelly Link and Shelley Jackson fans were spilling out into the KGB's hallway on Sunday night eagerly waiting to hear what Link, author of Magic for Beginners, and Jackson, author of the classic hypertext novel Patchwork Girl, had in their bag of tricks.

**Subscribe to KGB BAR Reading Series podcasts by copying and pasting: feed://feeds.feedburner.com/kgbbarlive into your favorite podcast application (iTunes, Thunderbird, etc.) In ITunes, simply go to Advanced, then select "subscribe to podcast," and paste in the url above! ***

Tony Ingrisano & Jill Oz; Alicia & Chapman; KGB audienceKelly Link jokingly announced that her pale complexion was the result of having stayed up late gaming the night before (and, of course, a few drops of vodka …). Her pallor perfectly suited the short story excerpt that she went on to read. She was eager to bring Halloween to the evening, which, with a little imagination, could be a room in a haunted mansion (KGB's red walls, candles, gilded frames).

Olena Jennings & Bess Lovejoy; Alixis Grausz of the Atech Theater Group and friend; Ken & Ernest Link's protagonist is on a mission to exhume the poetry he buried with his dead girlfriend (after all, a poetry contest deadline is quickly approaching). The story takes another humorous turn when he digs up the body of the "wrong dead girl." It turns out the "wrong dead girl" has a craving for preservatives. They take a drive to the Seven Eleven for some beef jerky. 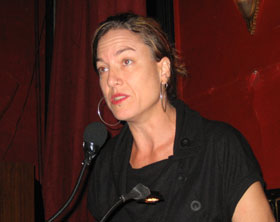 Shelley JacksonShelley Jackson expanded on the freakish themes, reading from her novel Half Life in which the protagonist Nora is one half of a conjoined (Nora prefers the term "conjoined" to "Siamese") twin in a world where conjoined twins are prevalent enough to justify a "Twofer Pride Parade." Nora leads us through the Museum of the Royal College of Surgeons where she engages in conversation with the exhibits, including the skulls of conjoined twins. Jackson concluded her reading with the memorable song of the two-headed pussycat sung about a boy who was born with a tiny head like a crown on top of his normal head: "the world is already so ugly we'll hide your face away, hide your face away, away." 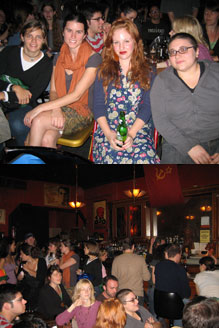