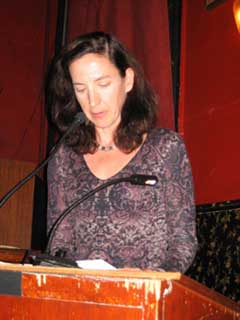 Humor and Baltica (Russian beer) flowed in equal amounts among the jeans-and-glasses wearing crowd at KGB on Sunday for the reading of Elise Blackwell and Porochista Khakpour. Blackwell read first from her novel Grub about the publishing industry, which was based on the Victorian-ear novel New Grub Street by George Gissing. The intelligentsia at KGB were at attention, seemingly dazzled and shaken by her tales of writers' woes. When Blackwell's character, Eddie Renfros, angsty over the fate of his novel, finds solace among the "jean-clad and bespectacled" group at the "CIA Bar" with its "cold war era spy decor," there was a bar-wide expression of conspiratorial mirth. Another character appears at a reading in a white cat suit and long black wig announcing, "I don't want an introduction. I am an introduction." Grub is part roman a clef, with characters taken from Blackwell's own experience while other characters are taken from Gissing's earlier novel. Asked whether or not Henry Baffler, the character given an apartment by a mystery benefactor, was fact or fiction, Blackwell laughed and claimed it was both. The benefactor was taken from Gissing's novel while, the substance of the character's novels was based on the work of Blackwell's husband whose own novel is forthcoming. Is it true, as one character laments, that there are no Max Perkinses left in the publishing industry. "It's changed a lot." Whereas editors and authors used to convene in private, these days marketers are a steady presence at meetings. Blackwell, who earned an MFA from University of California, Irvine and was utterly earnest and likeable, said after the reading that what she found surprising and sometimes concerning were "the fates of different writers." While she and other classmates from Irvine like Michael Chabon have been fortunate, some of the best writers from her program were never published. Still she expressed optimism saying that writers who persisted, for many years if needed, would ultimately succeed. Grub is Blackwell's third novel in four years. Her first novel Hunger was praised by J.M. Coetzee among many others and was called one of The Best Books of the Year for 2003 by the Los Angeles Times. She currently teaches at the University of South Carolina. 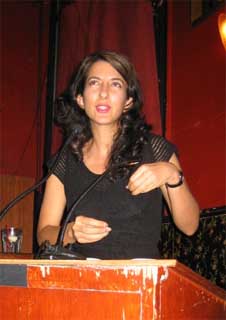 Next, the irresistibly quotable Porochista Khakpour opened her reading with a "preamble ramble," about her debut novel Sons and Other Flammable Objects, and read a weighty scene, which recounted the young character Xerxes' experience on 9/11. After, Porochista announced she would read a sex scene, or one that came close: Xerxes having a wet dream about Barbara Eden. "I couldn't even write a real sex scene," she said. I recalled how she cleverly retreated from the subject in a short story published on Nerve, in which a college freshman, convinces his girlfriend that "biological sex is anti-progress," and thus initiates a period of avant-garde experimentation in "no sex." Later, Porochista explained she was trying to keep the audience awake with the wet-dream scene. "At readings, I'm a disaster. I'm asleep like that," she said and snapped her fingers. Her nails were perfectly manicured in white pearl. Her ennui isn't limited to readings: Fellini puts her right to sleep, but films by Cassavetes keep her endlessly engrossed. Crouching Tiger Hidden Dragon? Charlies Angels? "Asleep in two minutes," finger snap. Porochista used to have a white streak in her hair. People were saying, "who is this Susan Sontag look-a-like?" She dyed the streak chestnut brown. Not because of the comparison, but because she got bored of it.

What writers inspired her? David Foster Wallace. "I love him," she said rolling her eyes. "I used to stalk him." Porochista graduated from the Johns Hopkins University Writing Seminars MA program, where she was awarded the prestigious Elliot Coleman Fellowship. Raised by a Zoroastran convert and now dating a former Hare Krishna monk, Khakpour claims she's not into the practice of religion, though she does demonstrate solidarity with Iranian-Americans. She recently wrote on her blog (http://porochistakhakpour.blogspot.com) a response to a negative review of her novel, a practice normally frowned upon in the publishing industry. Is she going to take it down? "Are you kidding?" She said. Feeling that the review was a personal attack, she had to stand up for herself and her people. This is not the first time Porochista has shown conviction. Living on "canned food and ramen" while working on Sons, she could not afford the costs of photocopying the manuscript and asked a friend to do it for her. She said it was important to her to write a novel about the Iranian patriarchy and disabuse the public of false notions of Iranian women, as powerless "women in veils." According to her, they're the real force in Iranian culture. In homage to the women of Iran, Khakpour is currently translating the poetry of one of Iran's powerhouse poets, Forugh Farrokhzad, whose work she intends to make more familiar.Rozi Jovanovic