10.21.07: The Harvard Lampoon furnishes much of America's comedy today. It's surprising that it's former members can display such a variety of stylistic persuasion. Yet at KGB on October 21st, the four humorists who read, Simon Rich, Zach Kanin, Colin Jost and Lizzie Widdicombe, were as distinct as Hippocrates's temperaments.

The Harvard Lampoon WritersSimon Rich read from Ant Farm, his debut collection. "It's all about fear and doom," said a melancholic Rich about the subject of his new collection, which though not as gloomy as one would think has a story entitled ":(" that contains the line "i used 2 B a typical teenage girl...that was B4 i contracted hepatitis C." What is the next one about? "It's also about fear and doom. Yeah, I'm surprised my publishers agreed to let me do another book on the same subject." The next book, entitled Free-Range Chickens, about free-range chickens and their day-to-day activities, is due out in August. As an English major, Rich opted out of pursuing English with honors so he could design a more personally tailored curriculum that had "less Shakespeare," and more "black plague and monkeys." Rich, who graduated in June, is now a writer with Saturday Night Live. By whom was Rich inspired? "Philip Roth, T.C. Boyle and The Simpsons. Mostly The Simpsons."

Lizzie Widdicombe, an energetic reader, presented a faux non-fiction work entitled Untold Secrets: A Secret History of the CIA, that purportedly had chapters devoted to hot tub scenes and how the CIA celebrate Christmas. Widdicombe read to much laughter. The narrator was an investigative reporter, who as a child, liked to take things apart to understand how they function and who, upon seeing her baby brother brought home from the hospital began to think of all his parts and joints. It was difficult not to listen to Widdicombe, a reporter for The New Yorker, and not imagine her as a choleric child taking apart her dolls to reveal how they functioned.

Next, a reader of more phlegmatic influence, Colin Jost, claimed he resided "in the hearts of children around the world," and read from scraps of paper in all sizes and stages of yellowing disintegration. Like the Philip Glass of comedy, Jost read off his minimalist creations which had been composed at random on subways and streets: Flow Chart: Bananas-People-Monster Bananas; a quote of Robin Williams's, "My comedy is like an emotional hang glider;" "This one was just something that I was excited about," he said. "Blockbuster, NO LATE FEES." Then, a slogan for shoes, "my feet, my life." "He was like a gay bar; dark and gay." Sometimes his deadpan delivery threatened to slip by, the audience, as if listening to new music, not sure when to clap, or in this case chuckle. Thankfully, Rich was on hand to provide his fellow SNL writer with peals of laughter as cues to usher in the novices and when he did, laughter was proven to be contagious. 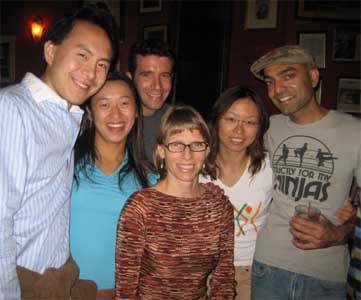 Zach Kanin, the sanguine and fun-loving cartoonist for The New Yorker, anchored the evening with a reading from his book, The Short Book: Tall Stories, Freakish Facts, & the Long & Short of Being Small in a Great Big World. He started with ersatz testimonials from the book such as "I heard Zach Kanin is unstable," and "Before I read this book I was short-now I'm tall. You do the math." At one point the self-proclaimed "shortest president ever" of the Harvard Lampoon lifted the book and pointed to a picture of himself as a child to complete a joke and said, "a lot of what's funny is the illustrations; if anything falls flat it's probably because you can't see the pictures." He didn't have to lift the book again.

The writers of the Harvard Lampoon also included role-playing, rap and, like gracious guests, an improvised piece about their host, KGB in their repertoire.

After the reading Kanin said he painted as a hobby, "in oils; figuratively." The four former members of the world's longest running humor magazine gathered, their plans for the evening hanging in the balance.