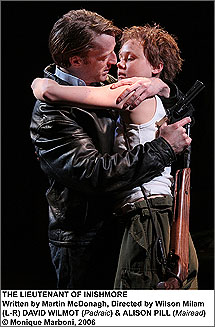 At the beginning of The Lieutenant of Inishmore, two men are standing in a small, bleak living room; the beaten-up chairs and stained walls, and the sparse black-rock landscape beyond those walls, let you know immediately that this particular Irish tale isn't going to be the typical green-hilled, nostalgic kind. The fact that this isn't going to be a typical play at all becomes clear as soon as you realize what the men are looking at: a dead cat, splayed on the table before them, its brains falling out of its head.

Surprisingly, it's a funny scene. The exaggerated looks of horror on the men's faces push the whole thing over the top, and the rest of the play follows gamely along, layering absurd situations and dialogue with hilarious levels of grossness. One of the men mugging at the dead cat is Donny (Peter Gerety), the father of the cat's owner, Padraic (David Wilmot), who's away on business. That business turns out to be terrorizing petty criminals and planting bombs in the name of a free Ireland, as Padraic is a member of a splinter group of the IRA, a psychopath who loves his cat, Wee Thomas, more than anything, but will unhesitatingly point his gun at his own father (as he will do eventually). Donny thinks his companion at the table, Davey (Domhnall Gleeson), ran over Wee Thomas, with his bicycle; so does Davey's sister, Mairead (Alison Pill), who loves animals so much that she nearly blows Davey's cheek off when she hears the news. The question of who really killed Wee Thomas, and how Padraic will react when he finds out, drives the play until Padraic does come home—in a hilarious scene which heightens the frenzy and ends with the set awash in blood.

This is the second in Martin McDonagh's Aran Islands trilogy, after The Cripple of Inishmaan and before The Banshees of Inisheer—the latter being the only of his plays that hasn't been staged, because McDonagh doesn't consider it good enough. The Lieutenant has been the subject of much critical excitement since it opened in March off Broadway (it has since moved onto Broadway, to the Lyceum Theater), and it was nominated for five Tony awards this year. Most of this acclaim is well deserved: the acting is stellar (the evening I saw the play, Padraic was played by a pitch-perfect understudy, Brian Avers), though the characters don't require nuanced performances, and McDonagh's loopy dialogue is witty and smart, when you can hear it clearly behind the actors' heavy brogues. Possibly the most impressive thing about the play is the playwright himself, and the transition in his career that this staging represents. McDonagh wrote all seven of his plays in a nine-month span in 1994, when he was 24 years old. And after an impressive 12-year career based almost entirely on that output, it also may be his last play altogether; he told The New Yorker in March that he doesn't plan to write another.

McDonagh's often compared to Quentin Tarantino, both because of the blood and because of the comedy inherent in the violence. But in Tarantino's films, violence establishes itself early; we can laugh because we know we've entered a world in which life has little value, and so we accept that it has little value. In The Lieutenant of Inishmore, it seems almost possible that the whole thing will end without a single fired shot; when the bloodbath starts, we laugh because it's so horrifying. Through most of the play, though, characters point knives or guns threateningly at each other as if waiting for an offstage cue to excuse them from following through on their gruesome threat. The first time we see Padraic, he's holding a knife and explaining to his torture victim, a petty drug dealer named James (Jeff Binder) whom Padraic has strung up by his feet, why he shouldn't complain: Padraic's only pulled off two of James's toenails, and both from the same foot, so he'll only limp with one leg. Just as he pushes his knife against James's pecs, Padraic gets a phone call with the news that Wee Thomas is sick; within minutes, James has won Padraic's mercy by talking about his own beloved cat. The timing is pure Monty Python, and it seems now that Padraic doesn't loom so large, that he's just a small-time thug who likes to posture. In some ways, this is true, and it makes his eventual killing spree all the more horrific.

The Tarantino comparison is apt in another way: McDonagh is a cinematic playwright, and there are moments in Lieutenant that cry out for quick, multi-camera shots to capture the action. McDonagh has said that he's been heavily influenced by filmmakers such as Tarantino, David Lynch, and Martin Scorsese, and that he found much London theater “dull.” His next project is a feature film called In Bruges, about two hit men who kill a child by accident. If his theater work is any gauge, it'll be far more than a mere thriller.

Priya Jain is a freelance editor and writer living in Manhattan. She has written for Salon, the New York Times Book Review, the New York Observer, Bust and other publications.

MARTIN McDONAGH received an Evening Standard Award nomination and an Olivier Award for Best Play for the National Theatre production of The Pillowman while the Broadway production won a New York Drama Critics Circle Award for Best Play (Foreign) and Outer Critics Circle, Drama Desk and Tony nominations for Best Play. His first play, The Beauty Queen of Leenane, received a Best Play Tony nomination in 1997 and was the first in his Leenane Trilogy, which also includes A Skull in Connemara and The Lonesome West, for which he received his second Tony nomination for Best Play. The Cripple of Inishmaan, the first of his trilogy of Aran Island plays (which also includes the Oliver Award-winning The Lieutenant of Inishmore and The Banshees of Inisheer), opened at Britain's National Theatre and transferred to the Public Theater. Other works include Suicide on Sixth Street, The Retard Is Out in the Cold, Hangmen, Dead Day at Coney and Seven Psychopaths.