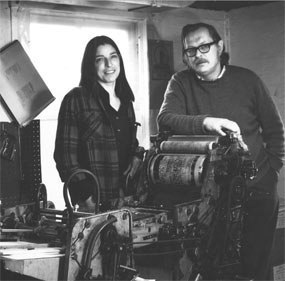 Judith Ayer Doyle and Sandy Taylor next to the small press they used in the 1970s and early 1980s. Judith Ayer Doyle is a co-director of Curbstone Press.As an undergrad, I fell in love, like most young poets, with Neruda, his sweeping images, intense and burning on the page. Neruda made me want to learn Spanish, but alas, I was studying Hebrew. Then I fell in love with Rilke and decided it was German I should be learning. After Rilke, it was Amichai. They were my first brushes with international poetry. I began to gather anthologies, eager to learn what the "Modern Hebrew Poets" were doing, which led to my search for books, not just the few teaser poems in the anthologies. While there are many publishers and organizations dedicated to international writing (Words Without Borders and Sheep Meadow Press are two that I recommend), this month I chose a press that I was less familiar with. It was their motto that caught my attention: "Poetry, like bread, is for everyone"- Roque Dalton.

This month my travels take us to Connecticut to visit Curbstone Press, a press with a strong interest in international writing. I was immediately impressed with the bilingual books and the press's dedication to teaching.

Without knowing that she was recently awarded the 2006 Neustadt International Prize for Literature, I picked Claribel Alegria's Sorrow. Perhaps it reminded me a bit of Neruda, with Hector Poleo's painting "La Espera" on the cover. I had enough understanding of Spanish to notice the juxtaposition, the connection between hope and sorrow in the work. Claribel Alegria's grief is acute, a small stone you can slip in your pocket, concealed but always present and palpable. The poems in Sorrow (Curbstone Press, 1999) are all one stanza long and vary from 3 lines to a few pages. This lack of breath causes you to really feel the continuity of Sorrow, and how Alegria invites us to stay with her, as even her stanzas will not let us relent into a pause. Though her poems are small and digestible on the page, her lines stick with you as you move through your days. While walking around the city, I found myself repeating lines like, "every time I name them/ my dead are resurrected," "Sadness:/ a peach/ pecked by birds," 'we are voice and echo/ mirror/ and face."

The book also reminded me how universal language is, how there are so many texts that transcend culture. There's more than a nod to the Greeks here, with poems like "The Lamentation of Ariadne", "Circe", and "Hermes".

Alegria's book made me wish that I could travel, like Forche did, to Nicaragua. But although that trip wasn't exactly in my travel budget, I was able to chat with Judith Ayer Doyle, one of the Curbstone co-director's in Connecticut.

Claribel Alegria; Claribel talking with a student following a reading in Willimantic.Carly Sachs: How did you find the work of Alegria?

Judith Ayer Doyle: Sandy Taylor met Alegria on a bus in Nicaragua heading for the Ruben Dario Poetry Festival. The two became friends, and Alegría subsequently published the English translation of a recent book with Curbstone. The rest seems to be history. As her experience with Curbstone grew, she brought several other Latin American writers to the press.

CS: While I like the idea of chance meetings and coincidences, you seem to really want to bring people to poetry. What I think is unique about your press is the educational experiences you bring to local students. Can you talk a little bit more about that?

JD: We both have a strong interest in education, but the main pivot here is Sandy [the other co-director of the press] was a teacher at all levels over the years: elementary, high school and college. It was quite natural for us to view Curbstone as an educational organization as well as a literary publishing organization since the early years-and we knew that students, having the chance to meet writers from countries that were frequently "demonized" in this country, was something we wanted to facilitate whenever we could.

CS: How do you pair poets up with translators?

CS: Why so much of a focus on Latin American writers, and how does that work with the demographics of Connecticut? Is there a large Hispanic community?

JD: While there actually is a large Hispanic population in Connecticut, our initial motivation was to focus on writers in Central America in relation to our own political interest in that region in the late 70s and the 80s. In addition, there is a large Latino/Latin American population in our own community-currently at about 30% or more-and many in the community appreciate that we bring many Latino/Latin American writers into our town for readings and school programs. 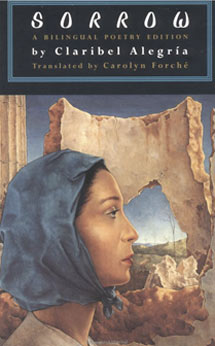 CS: How did the press begin?

JD: In its early years, the Press was supported by "sweat equity", the volunteer Co-Directors (Doyle & Taylor) printing the books on an old ATF Chief 15 printing press after their regular jobs. Doyle quit her job in 1979 to work full-time at Curbstone while Taylor continued teaching at Eastern Connecticut State University until 1989. Developing a paid, full-time staff, a major goal for us, was started in 1991.

Supported since 1982 by grants from The Connecticut Commission on the Arts, the Press grew steadily and began to attract consistent funding from the National Endowment for the Arts in the mid-1980s. With this increased funding, Curbstone outsourced its printing so the co-directors could focus on editing, marketing, financial management and development. During 1991-1995, Curbstone was one of nine presses to receive substantial support for organizational development from the Andrew W. Mellon Foundation, which overlapped with the grants it received from the Lila Wallace-Reader's Digest Fund for audience development. This infusion of funds significantly increased Curbstone's organizational capacity.

There was a strong interest in bringing writers into the schools from the beginning, which was accomplished in a haphazard way until Curbstone started receiving funding in the 1990s to create an ongoing program. While the number of 3-day residencies, workshops, and reading/discussions we can arrange is dependent on the funding we receive in a given year, we have continued to bring some of these programs to the local schools each year. For instance, we have brought Claribel to our local schools at least three times in the past 8 years.

Though I was not as lucky as those students, I consider this book a blessing-one that I would pass on to comfort those grieving, sing to those who love, but mostly share with those who recognize beauty as something simple and tangible.

For more on the press, visit curbstone.org

For the first installment of Poetry Roadtrip, please click here.