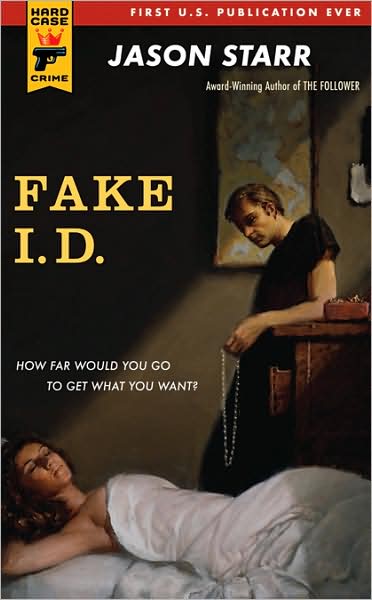 By now, fans of Hard Case Crime's brand of pulp crime fiction already know Jason Starr. Along with the delightfully cynical crime writer Ken Bruen of Ireland, Starr co-authored Bust, Slide, and The Max—a wicked trilogy reveling in dark humor, gratuitous sex & violence, and quotations from the Buddha. Reading the series is like a horror fan watching Wes Craven's Scream series: the authors play by the rules of the genre, while simultaneously letting you know that they know you know that you are experiencing a genre. A marriage between pulp and post-modernism, clever enough to be appreciated by academics uptown as well as delivering the goods to anyone who just wants a good read. First encounters with art works that are collaborative in nature, such as the Bruen/Starr trilogy, makes anyone curious about what these guys write about when they are going solo. This summer, readers can now discover a new side of the New York City native, with the ‘new' Fake I.D.I put that description in quotation marks, as the book was rejected by most of the major publishing houses when it was originally written in 2000. ‘The book was supposedly too noir,' Starr told me recently in an interview for Crime Corner. ‘It was pretty frustrating. I thought, and still think, it's the strongest pure crime novel I've written.'Readers can decide for themselves if they agree with the author's evaluation of this dark little book. But be forewarned: if you are looking for Bust, Part IV, you are in for a surprise. Fake I.D.'s noir is a canvas painted in dark colors from a whole other palette; the novel is reminiscent of other ‘old school' crime writers like David Goodis or Cornell Woolrich. The shift in craft and content between Fake I.D. and the series he wrote with Bruen is part of what makes many celebrate Jason Starr as a leader in the new generation of crime fiction writing. The book centers on Tommy Russo, a struggling actor in Manhattan, making his way as a bouncer for a bar on the Upper East Side. But while he is checking thirsty customers' driver's licenses, or auditioning for dogfood commercials, Russo's mind is on the track. He dreams of ‘making it big' at the horse races, and gambles all of his money on this long-shot bet. Until the dream becomes a living nightmare.Russo is soon offered to join a group of investors in the buying of a racehorse. All he has to do is pony up the ten grand. And then the problems begin.Starr expertly details Russo's descent into gambling as a compulsion. Like drug addiction and alcoholism, gambling destroys not only Russo's life, but also the lives of those around him—a woman that cares for him, co-workers, his boss, strangers. Like the glass of whiskey for the alcoholic, or the bag of heroin for the junkie, all of Russo's choices ‘justify' securing that next fix: getting the cash to place his bet.Except for perhaps Las Vegas, no other location could be a better fit than New York City. The island of Manhattan and its neighboring boroughs floats on desire and desperation, and has attracted cons and addicts (real as well as fictional) since it was bought from the Native Americans for a handful of pennies.‘Two of my favorite subjects,' Starr admits, are ‘obsession and delusion.'Starr writes convincingly about the specific mental twists and behavior of the compulsive gambler. Russo's world is a kind of fever dream that Starr expertly illuminates with speed and attention to detail. His knowledge of gambling, particularly horse-racing, is draft from his own research and personal experience (Starr co-edited an anthology of horse racing stories for Vintage).As a theater person myself, I particularly enjoyed Starr's portrayal of life as a ‘struggling actor' in New York City. Russo and another co-worker in Fake I.D. live paycheck to paycheck, attend dehumanizing auditions, grasp futilely to slim reeds of hope while they serve others drinks. Before writing novels, Starr began as a playwright; his knowledge of this culture hits the bull's eye, and his use of dialogue to convey character and action is brilliant. Thanks to Hard Case's editor, Charles Ardai, who loved the book, Fake I.D. is finally available. In this instance, ‘good things come to those who wait.'Jason Starr, born and raised in Brooklyn, has been compared to authors James M. Cain and Jim Thompson. Starr received the Barry Award for his novel Tough Luck (2004), and the Anthony Award for Twisted City (2005). Starr is also the co-author (with Ken Bruen) of Bust, Slide, and The Max, all published by Hard Case Crime.