Inside The Black Factory: William Pope.L on Art and Race 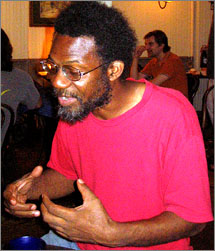 If you walked through the tourists who throng the market stalls in Union Square's South Plaza like unmoored dirigibles on July 22nd, your course would have been further complicated by a tent, an inflatable igloo, and a van emblazoned with some sort of logo. The display may have looked like another guerilla marketing campaign—it seems there's a crap giveaway at least once a day in the park—until you got a little closer and a man in a hockey mask painted with blackface came up and asked, “What kind of nigger are you?”

Welcome to The Black Factory.

The brainchild of artist William Pope.L, The Black Factory has been on the road for seven years, bringing an ever-changing blend of provocation and performance to cities all over North America. The Black Factory hovers somewhere between an impromptu performance by a clique of off-kilter buskers and shock art served straight up. Throughout its day-long, multi-part displays, Pope.L seeks to engage the public in an interactive dialogue about difference–whether or not the public is ready for it.

Also known for his street crawls, staged solo and in large groups, Pope.L has made a career out of transforming taboo topics such as race and class disparities into in-your-face spectacles. After his troupe's Union Square performance, I sat down with Pope.L to talk about the artist's role as provocateur, the state of race relations in America, and why he decided to move to Maine.

JL: Can you tell me a little bit more about your performance today: how you thought it went, and in what way this might have differed from some of the performances you've done in other places?

WP.L: For a project that has this many parts ... I think it went pretty well. As you know, the city decided to edit our permit at 6 or 7 o'clock this morning, in a major way, so what do you do? Especially if you know it's going to be raining all day off and on. But the crew handled it very nicely. No one quit, that's good. No one got stabbed by anyone for saying something about race they shouldn't have.

JL: When I was [at the performance] I saw the guys in the blackface hockey masks really provoking some of the people who were there. Is this something that you do on purpose?

WP.L: First of all I think it's important to try to talk about difference, or what separates people, and what brings them together in a public way. The idea is to maybe bring back some sense of a public square kind of atmosphere.... You want people to feel that they can enter the discussion. At the same time, I don't want them to get the idea that the discussion is going to be easy.

Our obligation was to commit to being there. If people walk away from you, you go to the next person. If that person walks away from you, you go the next person. Now, that's very frustrating, let me tell you. And it does bother the crew a lot to have that happen over and over again. But that's part of it. Someone needs to make the first step. Someone needs to make the second step, sometimes ... it's a leap of faith.

JL: At least in a way you're kind of planting a seed. Even if they walk away, they've walked away for a reason, because they're uncomfortable, right? So you're making them think about something.

WP.L: I like that idea, but in some way it's another cliché–the "plant the thought" thing. Sometimes I just wanna grab people and shake them really hard like they're a little baby and say, “Look at you, look at you!” And then give them a squeeze, and then go “Look, it's okay ... it's okay to be concerned that you have to get where you need to go, but can you hang out with me just for a second?”

And it's funny, in urban places, sometimes people who have a lot of friends... still feel isolated here. Sometimes I think a lot of people we meet simply want someone to speak about what's going on inside–to bring their inside outside. In the US, where there's so much floating difference, there's a reason that people feel separate from each other. If we can make it function as a site, a network for people to plug into, for whatever reason they may have, maybe that's a good thing.

JL: Can you talk a little bit about what you mean by floating difference?

WP.L: I guess when I started this I was thinking, what divides black people? Some black people believe that blackness is more specific, like, Aargh! Kinte cloth! And some black people say, well, we have a European connection, and a Caribbean connection ... it's a wide horizon of behavior. That's more my thing. What about the space between these two groups? I was interested in making a work that might speak to that. Then I realized that, the more I looked into it, what divides those two groups, in a way, divides maybe men from women, or gay folk from non-gay folk, so on and so on.

JL: So, your idea of what constitutes blackness...

WP.L: It's about issues of authenticity. But I'm not so interested in that. I'm interested in paying homage to where I began, giving back to the neighborhoods and all that. Definitely, of course, I'm going to give back to blackness. Because, no matter what anyone says about blackness being a wide horizon of possibilities, as Malcolm X said, you're still a nigger. And many people still categorize you in a very narrow way. That's the political reality. Over time, black people have been able to engage in a wider array of activities. But people look at really what black people do a lot, and many people still think it's body-bound. You know, black singers, black sports people. The idea that black folk could be intellectual, but if they are intellectual, it can only be about race matters. Hence, the last twenty years of cultural theory.

JL: It seems to me that the media is doing the same bad job representing the black community, if there's such a thing as one black community. But on the other hand you see a lot of new faces that are breaking the stereotypes. There are TV shows now that have interracial relationships that don't even bring it up as a topic .... Maybe I'm living in a bubble in New York, but I feel like, yeah, there's still intergroup ethnic conflict, but things seem a lot more smoothed over. I'm curious if you pick up on any of that or what your reaction is.

WP.L: I think it's kind of where you are, too. Overwhelmingly, even now, prisons contain I think it's over 50% black people, black males. Even though the other things you're saying may be true, that's still true. So what's really going on? My older brother is one of those people ... and I was supposed to be one of them, more or less, and I know guys that I grew up with, most of them ... get hooked up with some kind of criminality or dysfunction. And the incidence of AIDS in the black community. Some of those things are still true. So I think at a cultural level it's true that some of those images are changing, but I think on an infrastructural level in terms of real aid to the black community, or trying to change some of the embedded patterns ... a lot of [those patterns] are still there.

JL: You're originally from the New York area, and you've been all over the place, but you settled [in Lewiston, Maine]. Is it a place that really inspires what you're doing?

WP.L: I like small towns. My parents are from small towns, my mom is from a very small place. A lot of her life was spent in Mobile, Alabama. There's something about them, the fact that the loudest thing's a lawnmower. I guess at a certain part of my life I needed to see another possibility. You can tell from a project like this I have this tendency, no matter whether I'm here or not, I'll create complicated shit. So I need to be in a place where I can't do that as easily as possible, and Maine's one of those places. And sometimes I have to make myself not do that. I could have done this project ... much simpler. There are different versions that I have sketched out.... Actually, I thought even after those models, this is most elegant: Three people. Truck. Car. I think the most complex part of The Black Factory is the people element. If you could do this without any people, it would be a great project. Hah! Of course, I'm being facetious.

William Pope.L is a prominent, multi-disciplinary artist known for his ironic and martial conceptual art dealing with consumerism, social class and racism. Pope.L regularly draws upon his African-American heritage to tackle variations upon what he calls "social conundrum." He is trenchantly dubbed "The Friendliest Black Artist in America", which is also the title of a book on his works published in 2002 by MIT Press.
Jonathan Lachance holds a B.A . in English and a masters degree in urban planning, but he's all about fiction. He recently completed a first novel, Heirs of Eminence, and is hard at work on his second. He has published articles on urban planning in Progressive Planner magazine. When he's not glassy-eyed in front of a computer, there's a good chance he's reading something by Murakami or Chandler or practicing Yiddish with his bubbe. He lives in Brooklyn. Contact Jonathan@kgbbar.com.