Here There and Nowhere: Cuba, Part 2

I commenced begging. "Listen, I'll pay it, please, that's my flight. I have to go on it."

"Forget it, you're antisocial, the flight's closed," she said.

She gathered up some papers and started walking away. There was no one else left at the counter, no one else with whom I could plead or beg. This was Cubana Air-owned by the Cuban government-not the friendly skies. There were no customer service opportunities.

I might have just taken my luggage, climbed back in a cab, gone back to the shitty little room I had been renting in Havana and waited for the next flight. I happened to know, though, that there wasn't another flight on Cubana Airlines for four days.

And I was absolutely tired of being extorted. Five times in the previous twenty-four hours I had been stopped while riding a rented moped by Cuban cops looking for payoffs. Even so, under normal circumstances, I could have tolerated the extortions. It's to be expected in failing economies, and I had had similar experiences all over Central America, even in countries with whom the U.S. is more friendly.

The present situation was, however, amplified by a number of things. Aside from having the worst case of intestinal bacteria of my life, I had gotten up at 4:00 AM for two days in a row. The day before, I had arrived at this airport at 5:30 AM for the same flight, only to discover that it had been canceled.

At that point I returned, along with my intestinal condition, to the comfort of the toilet paperless bathroom of the Cuban home where I had been renting my room. Not to mention that, on my way over to Cuba from Costa Rica two weeks before, I had been back and forth to the San Jose International airport five times over the course of three days for the same flight on Cubana Air, which had been rescheduled or canceled-5 times. There was never a reason cited for the cancellations. Just canceled, postponed, rescheduled. No one answered at any of the listed phone numbers. Nobody at the airport had any information. You just had to come back to the airport to the check-in counter at the time the little sign reported. Then, when you came back, there was another sign that said come back again at yet another posted time.

Or sometimes there was no sign, you just had to ask the personnel at the counters for other airlines who told you, "I think it's postponed, come back tomorrow," or more depressingly, a mere, "I don't know." These were the joys of flying the state-run Cubana Airlines, and the repercussions of being too cheap to eat the five hundred dollars I had paid, in cash, for the round-trip ticket. 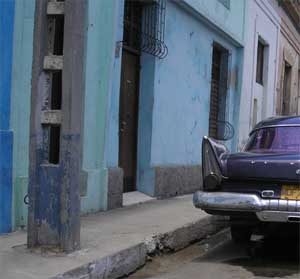 Instead of just letting this airline employee disappear into the bowels of the Havana airport terminal like I should have, I followed her. What did I think I'd accomplish by this? I've racked my brain, and I can't come up with an answer.

Did I think I'd file a formal complaint with Fidel, that he would issue me a personal refund and a promise that the next time I wouldn't be extorted? I wasn't thinking clearly.

"Ma'am, what is your name? I'd like to speak with your supervisor," I said walking briskly behind her.

"Then I'll follow you to the office where I'll speak to your supervisor."

I've observed situations like this in airports in the United States. Some pushy, rich tourist will shout in broken English about their rights. "Me wait all day. Want go now!" I realized I probably sounded something like this.

"I am my supervisor," she said.

Never mind that my own father had died in a plane crash years before. I was determined to get on that ancient, rickety Russian jet. On my way over from Costa Rica, the pilots had insisted all the passengers pack onto the back of the plane during take-off so that the nose of the old jalopy would start to lift on the way down the runway. So they could actually get the plane off the ground. They had been kind enough to let us spread out into seats toward the front of the plane once we were airborne.

Her ID was clipped to her shirt. I grabbed it and held on, leaned into get a glimpse of her name. This was a mistake. She wheeled around, screamed, flapped her arms, and pulled away before I even knew what was happening. I was left holding the ID. 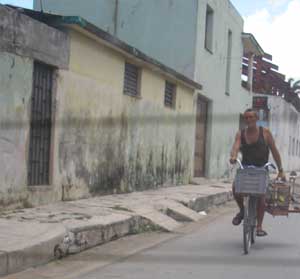 It had torn off of her shirt. I let it drop to the floor as if had fallen accidentally. Then I picked it up again and offered it to her. Now she didn't want it. She just screamed some more. Suddenly I felt very nervous. I looked at the ID as she went on screaming as I tried to commit her name and employee number to memory before I dropped the badge on the floor. But now the writing on the badge looked to me like gibberish.

It's amazing what adrenaline can do to the body. It can, for example, in milliseconds give a man the strength of a gorilla, the strength to lift a two-ton log off of a loved one. It can also render a person of reasonable intelligence gorilla-like in their mental capacities. Though I haven't explored this scientifically, it seems to me that adrenaline has its most profound affect on the brain's language center.

This was my experience here in the Jose Marti International airport in Havana. My Spanish, which I actually speak reasonably well, simply vanished. It was gone. There was no question about it. Suddenly I couldn't understand a word. Even in my native tongue, my thoughts were suddenly rendered to one or two word sentences.

Now dumb, I simply handed the ID back to her and walked back to my luggage, which was still next to the check-in counter. The Cuban cabbie who had insisted on helping me carry my bags in was standing there guarding them.

We made it about halfway across the terminal when I saw the suits coming. I considered walking more briskly, but where was I going to go? What was I going to do? Rush out of the airport, run to the Havana shoreline, and swim home? The Cuban security officers, in suits, swarmed.

"Why was she screaming?"

"I don't know." I paused for effect-and because I couldn't think of an explanation that wasn't incriminating.

"My taxi is waiting."

They just kept coming. More and more Cubans in suits with wires in their ears.After about ten minutes of standing around, attempting to explain the situation in my suddenly horrendous Spanish, the police arrived. One Russian Lada, then another, then a cop on a Russian URAL motorcycle. Now there were twelve uniformed Cubans with guns surrounding me.