Here There and Nowhere: Cuba 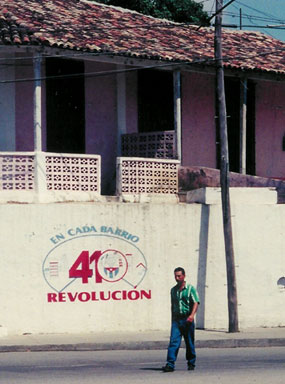 It was about 500 degrees in the Cuban prison. I had been here only three hours, but I honestly thought I might die soon. I had diarrhea. I was dehydrated. I hadn't eaten in two days. There was one ancient, tiny fan in the room that only the Cuban cop sitting at the front desk was privileged to enjoy. The fan had no cover so the sharp metal blade whizzed obnoxiously. I watched the cop's hair bouncing in the fan's breeze. He joked casually with his comrades-other police officers-whenever one of them came within earshot of the detainee room, where I was sitting. He seemed to be mocking me. I felt hatred for him. I imagined him leaning back in his chair, stretching his arms over his head, inadvertently passing his fingers into the path of the whirling blades, his blood splattering onto the poster of Castro hanging behind him on the wall. A Jackson Pollockish piece, maybe.

"The phone's broken," he said, but then it rang and he answered. "Oh, hi sweetheart. How are you?" he said.

In the picture, Fidel's fist was clenched above his shoulder the way it always seems to be during his speeches. Under the photo was an excerpt from a lecture he had given in 1999. It was about the rights and duties of the Revolutionary Police Force to contain antisocials, of which I was now apparently one. In order to effectively apprehend these enemies of the revolution, police should, it said, "be fit and serious, know a martial art, be willing to use force, carry guns, and only kill only when necessary."

I was relieved to hear that they killed only when necessary.

I took a deep breath, shut my eyes. Only a few months before, my girlfriend in the States had taken up meditation. I had mocked her then, and now I felt great remorse for doing so. I wished I could meditate now, and tried. I wished I were Buddhist-or the Apostle Paul. I fantasized about angels singing and putting the cops to sleep, and me just marching right out of there unmolested.

The meditation was failing. I went on feeling awful. A couple more hours went by. I sweated a lot. I couldn't think straight.

"Okay, come with me," the cop enjoying the fan finally said.

He walked me across the street to some kind of infirmary.

We went down a long hallway. There was a waiting room full of Cubans who were apparently hoping to receive medical attention. The cop marched me passed them. He poked his head in a door. "Come in," a voice instructed us. We did. In the room there was only an empty table and two chairs. Nothing else but a man with a stethoscope wearing a blue golf shirt in the style of the seventies. The logo said, "Pebble Beach Golf Club." Confident he wasn't a member , and trying to cheer myself with irony, I complimented him on it. He smiled, happy for the compliment.The cop mumbled something to him I had trouble understanding. Then he told me to sit down in the chair. The doctor in the golf shirt pressed his stethoscope against my chest. He told me to breathe. I had already been doing this, so I just went right on breathing. "Okay," he said, "stand up. Stand over there."

He told me to stand on one foot, which I also did, perfectly.

"He's not drunk, take him out of here," the doctor said.

The cop seemed disappointed. "Are you sure?"

"Of course I'm sure," the doctor said wearily scribbling something on a piece of notebook paper. "Get him out of here. I've got real sick people waiting," the physician said.

That morning at the airport, on my way out of Cuba, I had refused an extortion. The airline attendant checking me in had tactfully waited until there was no one else around. Then she had come in for the kill.

"What do you have in there?" she had asked.

The piece of luggage to which she referred was a closed suitcase that contained a travel bicycle. I told her as much.

"Oh, well that will cost you one-hundred American dollars," she said.

"Because it's a bicycle."

"It's in a suitcase. It's not heavy. It's lighter than clothes."

I stared at the piece of luggage containing the bike. That was why I had paid good money for a travel bike, so it would fit in a suitcase, so I could check it as normal luggage. "I mean it is clothes," I said. "What did I say it was?"

"No, I already know it's a bike, so it's one hundred pesos, pesos Americanos. One hundred American dollars," she said.

"Is there a rule to that effect?"

"Will you take a credit card?"

I loved Cuba. I had been there many times, and planned to come back again, so I didn't want to draw attention to myself. But I was worn out, absolutely exhausted. "May I speak with a supervisor?" I said.

"Okay, I'm closing the flight. You're not going on it," she told me.

I laughed, thought she was joking. But she picked up the phone. "No more passengers here. The counter is closed. Tell baggage," she said.