Born in California, McCall is an actor, director, and choreographer whose work has been presented internationally. He has taught at institutions such as the Yale School of Drama, New School for Drama, New York University, the Atlantic Acting School, the American Academy of Dramatic Arts, among others. He lived in New York City for 18 years before moving to Oslo in 2008, where he is the Director of The International Theater Academy Norway (TITAN), a 2-year professional theater education program combining innovative artistic craft with practical entrepreneurship. For more information, see www.titanteaterskole.no.
Category:
Column
September 4, 2008 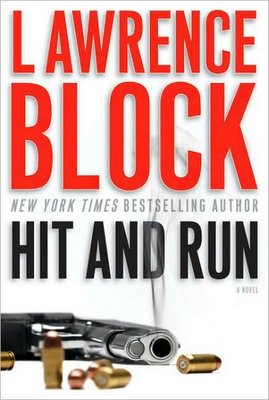 Lawrence Block, Hit and Run304 pages, $24.95Published by William MorrowKeller is back.This spring, Mystery Writers of America Grand Master Lawrence Block rolled out the latest exploits of Keller, full-time assassin and amateur philatelist. Block's newest novel in 3 years, Hit and Run (William Morrow, 304 pages) opens with our anti-hero browsing over some expensive stamps before he goes back to work (ie murders someone for money). But as usual with Keller (and anything by Block), things do not go according to plan. In fact, they go terribly wrong.If one is new to the Keller series—which began a decade ago with Hit Man, and followed by Hit List (2000) and Hit Parade (2006)—one may be a bit bewildered. One would think that, with a series focusing on a hitman, that every page would be packed with fistfights, gunplay, and the drinking of copious amounts of alcohol, right? In short, that there would be a lot of action.Not so with Block, who always plays by his own rules. Part of why Block is regarding as so innovative, and why he continues to delight and fascinate readers today, is that he challenges those assumptions within the genre of ‘hitman,' ‘mystery,' what have you. He's been doing so for over half a century, and this ‘Keller quartet' is no exception. Keller is an unusual assassin. He's unusual because he is so, well, ordinary. His job is to kill people, certainly; he approaches his ‘job' with focus, skill, and efficiency. And believe me, there are always a number of bodies in any of the Keller series. However, much of these pages do not center on the murders themselves (making the kills all the more sinister and amoral, due to their absence of affect or commentary). No, Block chooses to spend much more time on Keller as a man: not a super man, or an ex-Green Beret, or CIA operative. Just a man, much like the reader, and much like any one you might see on the streets of a major American city. Men who struggle with intimacy, reflect on their lives with questions, even perhaps go into therapy. Men who own pets, go out on dates, passionately collects stamps. Profession? ‘Oh, I kill people for a money.'In addition to seducing readers into identifying with this assassin's humanity, Hit and Run is brilliant at detail. This book's anatomy does not feature an assassin who never sleeps, eats, or runs out of money. Block opts for an almost documentary-realism in portraying Keller's dilemma, and it is exceptionally effective. In fact, by concentrating much of the action on these realistic details, the suspense becomes more compressed, immediate. At one point early on, Keller has a limited amount of cash, and he is far from his home of New York. How will he pay for gas, food, and lodging? Block puts you into the car with the assassin, and locks the door until the final page. I will not spoil the plot of Hit and Run, as part of the fun of a good mystery is how it unfolds. What I will say is that, within the first 50 pages, Block sets up a story where literally anything can happen; this book pulls out all the stops, and is unlike any ‘hit man' story I have ever read before.One last comment. In the past 3 _ years, Hard Case Crime has been providing readers with wonderful gifts, by reissuing a lot of early works of Block from the ‘50s. Out of print and unavailable to the general public for years, readers can now enjoy portraits from this writer as a young man, and relish the expansion of his work over the years.A pair of excellent gems are Grifter's Game (Hard Case Crime) and Lucky at Cards (Hard Case Crime). Like the Keller series, these books turn the spotlight on men who tend to exist in the shadows: grifters, con men, liars, cheats. And like Keller, they seem to wistfully yearn for a simple, ordinary life—or at least, how they envision it to be. Is it possible for them? Can they ever be ‘just like everybody else': coming home from work to have dinner with your gal, look over your stamp collection before going to bed upstairs, in the house with the white picket fence? Can you ever stop palming the guy at the check out counter? Could you ever leave the gun in the box?Perhaps Block's been giving us answers to this question for the last hundred books or so. Run to your bookstore, and buy Hit and Run, and enjoy Block's latest ballad of the ordinary. It's a tune full of suspense, humor, and perpetually tinged with melancholy. Old school stuff from one of the guys who built the place.

Lawrence Block is a Grand Master of the Mystery Writers of America who has won four Edgar Awards, four Shamus Awards, two Maltese Falcon Awards, the Nero Wolfe Award, the Cartier Diamond Award, and more. An incredibly prolific writer of over 100 books, Mr. Block has written novels, short stories, memoirs, nonfiction books on writing, and most recently a screenplay with Wong Kar Wai (My Blueberry Nights).

Brendan McCall has lived in both California and New York for many years, and currently lives in Oslo, Norway. A director, choreographer, and teacher, he is the Director of both Det Internajonale Teater Akademi Norge and Kirkenír Ballettskole (for more information, go to www.titanteaterskole.no). He is currently writing his first novel.