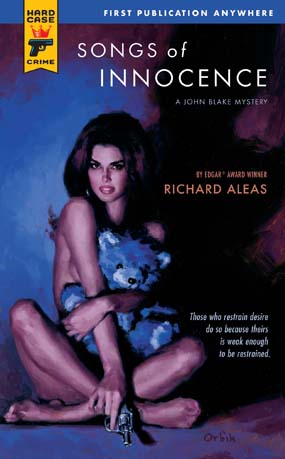 By day, he puts in long hours as the co-founder and editor of Hard Case Crime, an exciting independent publishing house he founded with author Max Phillips. By night, he switches identities, writing his own stories of murder and violence. Not only has he met with success as a short story writer under his own name, he also wrote two novels under a pseudonym, featuring a moody and fallible hero, Detective John Blake. Ardai's stories have appeared in the Akashic collections Wall Street Noir and Manhattan Noir, and "Home Front" won the Edgar Award for Best Short Story.

Ardai's literary mission has proved fruitful, and is particularly remarkable given his career's trajectory in the decade before Hard Case's founding. In the 1990s, as he approached graduation from Columbia University with a degree in English Romantic poetry, Ardai was anxious about his choices for employment. In a remarkably successful gamble, Ardai founded Juno Online Services in 1996, using equity capital from the DE Shaw group. In 2003, Ardai chose to reinvent himself again, in a new identity spawned from his love of crime.

In June, I met with Ardai at a cafe in the East Village and discussed his love for crime fiction, namely out-of-print pulp classics, and Hard Case's mission of supporting new and emerging writers. Within its catalogue, die-hards can find reissues of books from 30, 40, or even 50 years back from the likes of Lawrence Block, Donald E. Westlake, Ed McBain, and Cornell Woolrich.

In addition to these lost gems, Hard Case also publishes new works. Fans can read a mystery by mega-author Stephen King (The Colorado Kid), and then perhaps shift over to Scotland for a little tartan noir with Allan Guthrie (Kiss Her Goodbye), or perhaps to a Miami full of narcotics, murder, and deception with Peter Pavia (Dutch Uncle).

First and foremost, Hard Case is dedicated to publishing good books, particularly in the tradition of noir, a genre of crime fiction distinct from the typical 'whodunnit' or police procedural. Police, cops, and other 'superheroes' tend to be absent in these stories, and the protagonists are as fractured and authentically imperfect as its audience. And like the paperback originals from last century, the titles' covers feature original artwork with noir's archetypal ingredients: booze, dames, and guns.

Ardai is overwhelmed by the positive response from readers, and is committed to responding to every single piece of praise via email. "Our fans are willing to try an author that they don't know, solely because it's by Hard Case," said Ardai. "That makes me proud." Larger publishing houses take note. 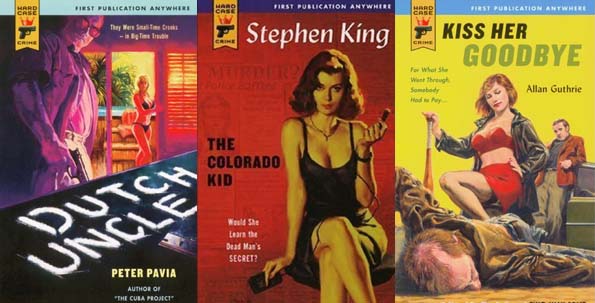 Hard Case's impressive list ranges from authors like Stephen King to Allan Guthrie and Peter Pavia.Earlier this spring, KGB Bar hosted a reading by Ardai and others in the Hard Case gang to a bubbly, rambunctious crowd. Noticing his seemingly average appearance in blazer, glasses, and khakis, an audience member asked how a clean-cut guy like him became involved in the world of crime fiction.

"What first attracted me to these stories," he explained sipping his gin and tonic, "was the idea that criminals could actually get away with it."

In noir, justice may not always prevail: the innocent may get injured or killed, and all of the heroes frequently flawed. In Ardai's opinion, these attributes are more believable and authentic than the archetypal English mystery, where murders are solved from the comforts of a drawing room while drinking tea.

A case in point: Ardai's Detective John Blake novels, written under his pseudonym-slash-anagram "Richard Aleas." Set in a seedy, contemporary New York, this city is dense with strippers, thieves, cons, and murderers. Excerpts from the visionary poet William Blake provide a kind of apocalyptic thematic framework for these tales.

"Both [Detective Blake and William Blake] share a fascination with death, with sexuality, transgression," said Ardai. But more than their common themes, Ardai feels a kinship with their approach to language. "Both are intended to be read by the 'common man.' Both deal with subjects that the reader can identify with, with a language that is plain and immediate."

American crime fiction erupted in the '40s and '50s-with Raymond Chandler to James Cain, Dashiell Hammett to Mickey Spillane-forging the template for our crime stories today. It's a literary tradition detailing a landscape of fear, paranoia, and disillusionment.

I asked Ardai if he had any thoughts as to why these old books are suddenly so popular again. "Certainly, one can draw parallels between that generation and our own. But I prefer not to get too quasi-scientific about it. Hard Case titles are about pleasure, pure and simple." He briefly paused, smiled and said, "Granted, pleasure of a rather dark and violent variety."

Be sure to pick up the second Detective Blake novel, Songs of Innocence, published this summer. It's one of my personal favorites of the year.