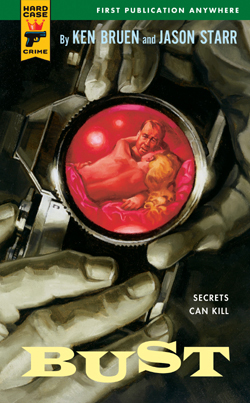 In 2006, the duo wrote Bust (Barry Award nomination for "Best Paperback Novel of the Year"). This fall, its sequel Slide has appeared in stores. Both books are published by Hard Case Crime, an independent house that re-issues out of print classics as well as new works in paperback originals, with gloriously pulpy covers. There are rumors of a third book in this series already in the works.

Both Bruen & Starr are hot crime writers on their own; it's not as though they need the extra work. The two have published nearly 30 novels and won over a dozen awards. But Bust and Slide are far more than 'hybrids,' where each is playing at half their game, or simply writing alternate chapters. This is a true collaboration. And what's remarkable is the unity of voice, the congruity of style. The characters are absurdly sexy, ridiculously violent, and uproariously fun. You'll find yourself recoiling in horror on one page, and then laughing your tail off on the next. So much for the 'lone-wolf enterprise.' Death to the lone wolf!

I interviewed these criminally successful guys to get some clues as to how they pulled off this literary heist. Their story is like any good crime story: it began over drinks, at the Mansefield Hotel."One evening we went for dinner with Charles Ardai [editor of Hard Case Crime]," smiles Mr. Bruen, "And by the end of the hours we had a deal, a title, and a plot." The smile widens. "Well, sorta plot."

"We wanted to do something that could combine our strengths, take types of characters we were known for in our own work, and try to reinvent them for a joint novel," recalls Mr. Starr. The two had been admirers of each other's books for years, and when they finally met at the Edgar Awards Convention in 2003, they just began 'riffing off of one another.'

And what a jam session: their individual gifts with writing seemed to harmonize fiendishly well. "I usually start with plot," reveals Mr. Starr. "Ken starts with character." Bruen adds, "I like to see where the characters will take us." 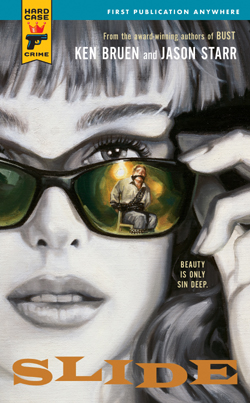 The two did not necessarily intend to pen a sequel after they finished writing Bust, "We just enjoyed the characters so much, as well as working together, that we couldn't let it go. We're deep into book three."

"And already talking about a fourth," adds Starr. Good news for readers of the series!

Crime fiction allows them a distinct freedom to continue this series as long as they choose. "There's no safety net for the readers [in crime fiction]," explains Starr. "Something bad can happen to any character at any time, which I think really amps up the suspense. The big advantage of having recurring characters-it helps build anticipation for the next book." Bruen agrees. "It's terrific to deepen the characters already there," he said.

Perhaps the collaboration between Bruen & Starr has been augmented by their mutual love for many masters of crime fiction and noir. Both love James M. Cain and David Goodis, Jim Thompson and Patricia Highsmith, among many others. And both exude a mutual respect for each other's gifts and talents.

"Ken has taught me a ton about character, about economy in style," says Starr. "Ken can get more into one page than some other writers get into an entire book. And like [Elmore] Leonard and Thompson, he writes great scenes."

Bruen admits that he has learned 'a hell of a lot about plotting and humor' from writing with Jason. He also adds emphatically that Starr 'gave me a whole new appreciation for The Odd Couple.'

Ken Bruen, born in Galway, Ireland, is the author of more than a dozen extremely dark crime novels. His book The Guards, which began the Jack Taylor series, was nominated for every single award in the mystery field, and won the Shamus Award. Mr. Bruen has a PhD in metaphysics and taught for 25 years in Africa, South America, and Southeast Asia.

Jason Starr, born in Brooklyn, has been compared to Jim Thompson and James M. Cain. His novel Tough Luck won the Barry Award, and the Anthony Award for Twisted City. He currently lives in Manhattan with his wife and daughter.