Kendra Sullivan lives in Brooklyn. She studied painting at NYU, where she received the Thomas Wolfe Prize for Poetry. She's worked at Poets House, Apex Art, Archipelago Books, Pequod, and The Center for Book Arts. Last summer she taught arts and crafts in Central America. She'd like to go back. Kendra is also a monthly columnist for KGB BAR LIT. To contact Kendra e-mail: kendra@kgbbar.com. 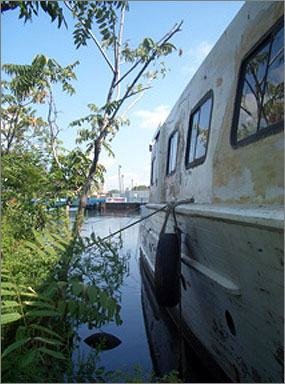 The Empty Vessel ProjectI used to work odd, early hours in an empty office, at an open cubicle, overlooking a grille of unoccupied cubicles. To an increasingly disconcerting degree, I'd identify with the last bee in a withered system of wax cells-a perception sharpened by a recent reading of E.O. Wilson's The Insect Societies, no doubt.

Later, workers would populate the office. Behind each divide, the daily grind of human destiny transpired: papers shuffled, knuckles cracked, exactly half a private phone call floated past. Gradually, the walls grew to resemble cell walls-not prison cells, but perhaps more like a honeycomb's.

I first heard of Wilson whilst reading a back-issue of Fence, when an author whose name I regrettably forget (because she was very good) sited the biological determinist dubbed "Darwin II" as an influence. The last line in Darwin's The Origin of the Species reads "...from so simple an origin, through the process of gradual selection of infinitesimal changes, endless forms most beautiful and most wonderful have been evolved."

When the office was occupied, I could imagine that its little cells, once multiplied, comprised the entire city. When empty, its cellular infrastructure felt like a fiberglass labyrinth abandoned by evolution. But, since patterns of growth are equally informed by both those systems that are evolving and devolving, we find ourselves immersed midstream in this ceaseless transitioning.
No matter how alien you might feel in a given moment, you are still in profound structural and cultural connection with the whole city.

II.
Scene change. I spent this New Year's in Berlin.

Darkness fell early. One late afternoon, we stood before the Hamburger Bahnhof, where Dan Flavin's neon columns plunge dumbly like the stalagmites in Robert Graves' Caves of Arta. Snow fell through the fluorescent colonnade, creating the illusion that the museum's entryway was the mouth of an artic cave. A snowman stood sentry.

The museum, a formidable venue for Modern Art, is the current incarnation of a railway station that suffered extensive damage during WW2. This train station-once a symbol of mobility-has become a prototype of mutability. This is apt. Whereas mobility sat atop the totem of desirable attributes at the turn of the 20th century, adaptability, flexibility, and mutability are most lauded and most essential to continued relevance in the modern world.

Inside, there was an exhibit of Bernd and Hilla Becher. The walls of the museum were a grille of black-and-white images prepared by the two septuagenarians, who've spent the equivalent of two lifetimes snapping serial photographs of industrial artifacts-blast furnaces, gravel plants, silos, lime kilns, and water towers. The couple captures the mammoth equipment in the moments presupposing its demolition, in the metallic light of having just outlived its usefulness.

These icons-becoming-casualties-of-progress bespeak isolation and devastation; these former theatres, whose gangways, galleys and ladders were dictated by human proportion, now find themselves ornamental, devoid of human warmth.

Across a long hall, David Judd's giant steel geometric sculptures subscribe to the unity and proportion of the human vessel, but are void of the more mortal failings associated with it. They beg the question: do you identify with the human form-the face, the hand, the gait-or the grille, the grid, the system within which it exists? Judd argued that on a fundamental level, there is no difference.

To me, the grille is reminiscent of New York City, a grid inside of which limitless alchemical interactions happen between strangers, acquaintances, and intimates alike. The city's grid is a theatre where industrial environments are relentlessly reimagined into venues that invite human interaction. One such block is by the Carroll Street Bridge, where 1st Street and the Gowanus Canal intersect. These are the approximate coordinates of two venues that share the Hamburger Bahnhof's aptitude for transformation, and survival is an "action, art and sustainability experiment," taking place on a salvaged WW2 rescue boat. On the watercraft, docked where 2nd Street dead ends at the river, they host readings and discussions, screen self-reflexive movies like Herzog's Fitzcarraldo, which is "about a boat and a dream," and have music shows. In late June, Josh Weinstein presented the diaristic video work of Matthias Fritsch, a "German image maker who investigates the interconnectedness of all things [...] a meditation on society, social systems, mass culture, and individual perception."

The Empty Vessel Project, BrooklynThe boat is being refurbished by volunteers on weekends. Needless to say, it's an amazing place that, by nature, escapes the grid, ricocheting from bank to bank.
Across the street, is the Issue Project Room, a two-story silo now used as an art space. The first and second floor are connected by a ladder and a trap door. Even the famous recluse-musician Jandek decided to cast aside his well-preserved anonymity and play there last year. His dissolute lyrics reverberated in the round room overlooking the canal with the raw, traumatized verbosity of a Beckett monologue; "Broke my neck until three/ You broke my neck until four/ You broke my neck until five [...] Then I found my freedom/Gone floating down a river to Madrid." .These spaces are devoted to art. Art is about being human. In an age that feels somewhat depleted of meaningful human interaction, art is sometimes about missing humans. These venues re-present the places where humans discovered themselves to be inexplicably missing: a forgotten rescue boat, a disused silo, a train station destroyed by WW2.

Issue Project Room, BrooklynThe City Grid, within which these art-happenings are happening, represents the way infrastructures can relate us to one another. A grid is map, a map depicts borders, and borders can be either penetrated or enforced. The aim of this column is to create a grille of intersecting cultural experiences, through which the readership can navigate and relate, where each border is an invitation to be crossed. Your participation is kindly requested. Please email me with anything you are excited about. Actually, please email me or post comments about everything you are excited about, and I'll try to incorporate them in the next column.

Kendra Sullivan lives in Brooklyn. She studied painting at NYU, where she received the Thomas Wolfe Prize for Poetry. She's worked at Poets House, Apex Art, Archipelago Books, Pequod, and The Center for Book Arts. Last summer she taught arts and crafts in Central America. She'd like to go back. Kendra is also a monthly columnist for KGB BAR LIT. To contact Kendra e-mail: kendra@kgbbar.com.