Hard Case Crime recently turned 50. The independent publishing house dedicated to all things pulp has published over 50 titles since it opened for business in 2005. And what a business for lovers of crime fiction: HCC not only reissues out of print classics by ‘usual suspects' Donald E. Westlake and Lawrence Block, but also new works by Jason Starr, Richard Aleas, and Max Allan Collins. Whatever book you choose, the HCC catalogue guarantees a entertaining cocktail of sex and violence, booze and gunplay.
Perhaps this last is why most mistakenly believe that American crime fiction is ‘a guy thing.' Most readers are more familiar with Sam Spade than Kate Shugak, Matthew Scudder than VI Warchowski. And in looking at HCC's catalogue, one can see why myth lives on: all of the titles are written by men.Well, almost. That is, until Money Shot (Hard Case Crime, 6.99) came along, and got nominated for the Edgar Allen Poe Award for Best Paperback Novel of the Year. ‘I still can't believe that my book will be on the same shelf with so many of my old-school hardboiled heroes,' says Faust.Writing within any genre is double-edged: how do you stay within the conventions of the form, and yet break the rules enough to distinguish your own voice? And are there different ambitions or obstacles for women writers of crime fiction?With Money Shot, Faust admits that she wants to ‘ make male readers think about things like female sexuality, complex body issues, fear of aging. And I want female readers to face the hard, cold reality of violence against women, as well as see just how tough a woman can be.' But she also notes that ‘I'm a pulp writer at heart. I just want to tell a good story.'Angel Dare—the former porn star who narrates Money Shot—evokes Uma Thurman's The Bride from Kill Bill: strong, sexy, and smart (it's no coincidence that Tarantino is quoted on the jacket). Angel plays with the archetype of ‘the whore with a golden heart,' becoming more Kali war-goddess than the concubine of Shiva. Betrayed and forced to restore justice, Angel rips through these pages with wit, sass, and strength. Intriguingly, the portrayal of the adult entertainment industry in Faust's book is more matter-of-fact, less lurid than what you would expect from a pulp crime novel. Faust—who has worked on and off screen in the fetish & BDSM segment of porn—wanted to show the industry ‘for what it actually is: an eclectic mix of all kinds of people, good and bad and everywhere in between, all just trying to make a living.'Faust balances her creative writing with other ‘glamorous' tasks like going to the gym, walking the dogs, blogging, catching up on email, and doing the laundry. ‘Unfortunately that doesn't always work out, and I often find myself pulling 7-day weeks.' Yet the origins of her books tend to come from a single scene, situation, or predicament. With Money Shot, it began with ‘Angel tied up and left for dead in the trunk. The fun of writing is taking a starting point like this and trying to piece together how she got there, what she's going to do about it.'The book ends rather open-endedly. Can readers hope for a sequel featuring Angel Dare sometime in the future? What is Christa Faust working on now? ‘If I told you,' she replies with a smile, ‘I'd have to kill you.' 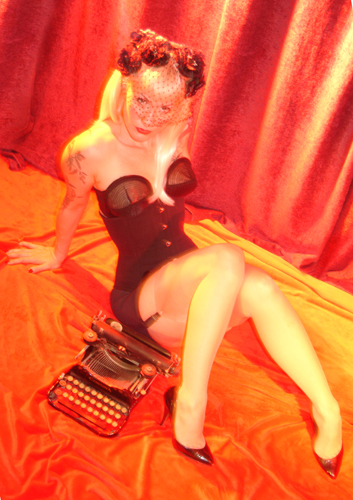 Christa Faust is the author of numerous crime and horror novels including Hoodtown, Triads, and Control Freak, as well as the Scribe Award-winning novelization of the movie ‘Snakes on a Plane.' She has also worked as a filmmaker, a model, and a Times Square peep show girl.