All Tied Up: Four Centuries of Graphic Sex in Japan & Eiichi Yamamoto's The Belladonna of Sadness 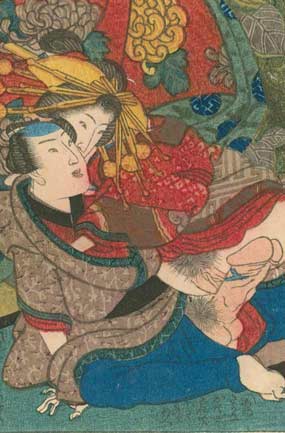 I confess I've never gotten off on animation, but for the sake of art, I was willing to give it a try. Truth is, I was looking forward to the screening of Eiichi Yamamoto's erotic comic masterwork, The Belladonna of Sadness, because today being uninitiated in the pleasures of anime is almost as shameful as being a forty year-old virgin. The film, made in Japan in 1973, was shown at KGB thanks to a collaborative effort between The Museum of Sex and NEW YORK-TOKYO (whose mission is to “provide exposure of techno-cool, eye-popping entertainment and production from Japan to the American public”). A beyond-capacity crowd waited patiently on the steps of KGB well before the appointed hour to see this film, which had never before been screened for an American audience. Yet once the door to The Red Room was thrown open, those previously orderly fanboys and girls bum-rushed the bar stools.

The Belladonna of Sadness is an adaptation of La Sorciá¨re, the French historian Jules Michelet's novel on Joan of Arc, but it radically departs from the story I'd learned about the little charbroiled martyr. Still, from the opening lines of The Belladonna, “Once upon a time, a kind young man and a beautiful woman were joined in love, smiled upon by the sun and drunk on happiness,” you just know Jeanne and her lover Jean are in trouble.

Though the film features a blend of animation styles, the scenes of the happy Jeanne and Jean are conspicuously flat—they're colorful, pretty pictures—but are still, static illustrations. Jean, Jeanne's beloved intended, appears about as dynamic and powerful as a paper doll, and his manliness is shredded as soon as he approaches His Highness, a character weirdly resembling the goat-like lead in Matthew Barney's Cremaster 4. Jean and Jeanne go to His Highness to present an offering of a cow in hopes that he will then sanction their marriage, but they are rebuffed. And they're not just denied; His Highness decides what he really wants is not the cow, but the milk: Jeanne's virginity.

As Jeanne's body is torn asunder from maidenhead upward, that's when the film begins to pulse with blood and life. Flowing down and out of her, Jeanne's blood artfully turns into bats, the bats fly off the side of the screen and with them, her innocence and hope for a happy life. After the rape, Jean tells Jeanne to forget the “incident” ever happened; they should just restart their lives. But he himself is unable to do so and shortly thereafter, he wraps his hands around Jeanne's neck to strangle her. That's the moment when this viewer realized cartoon sadism didn't really do it for her, despite the kaleidoscopically colorful images and their gorgeous blending with fully realized animation effects.

Though The Belladonna is a tonally dark film, it does have its moments of levity. When the devil appears--in the form of a pinky sized phallus that grows bigger and redder as he rubs himself against Jeanne's palm—it's difficult not to laugh. Once fully engorged, he offers Jeanne power in exchange for her soul. And apparently, in this world the vagina is also included in the whole soul package because once Jeanne makes her deal with the devil, she's forced to give it up to him repeatedly. Ravaged and savaged to the sounds of a late sixties soundtrack, psychedelic imagery and strobe effects, Jeanne's sexuality not only becomes the source of her power, it is her cross to bear. But after finally harnessing this power she does manage to become the most potent person in the land. I won't give away the ending of the film; suffice it to say that Jeanne does not get the ‘happily ever after' book-end to her ‘once upon a time' beginning, but she does blaze the trail for her fiery French namesake. 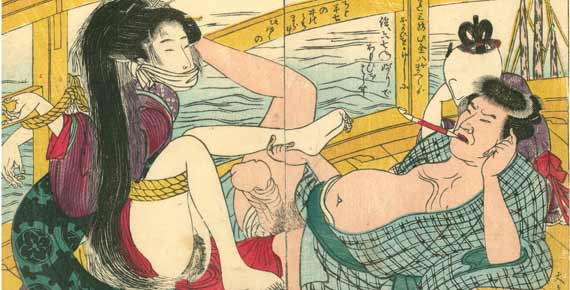 When The Belladonna of Sadness came out in 1973 it was widely considered a step forward in anime, as the filmmaker successfully carved a distinct niche apart from the pervasive style of full animation being done by Disney. Nonetheless, the film still remains firmly within the Japanese tradition of manga, literally “whimsical pictures,” a style of comic art that came to prominence after World War II, and the film also contains elements of shunga, an even older form of artwork in Japan that's the subject of the Museum of Sex's new exhibit, “Peeping, Probing and Porn: Four Centuries of Graphic Sex in Japan.” Not coincidentally, the words “graphic sex” in the exhibit's title are especially meaningful since the pictures on display are literally hardcore sex cartoons.

It was therefore with great amusement and great interest that I entered the exhibit to the sound of another visitor's laughter. But before I walked into the museum's main gallery, I was struck by a sign on the wall: “Please do not touch, lick, stroke or mount the exhibit.” Kitschy, yes, but one of those signs upon reflection you're rather happier is there.

Though many of the images and prints created during the Edo period eventually made their way to the West, shunga has been rarely seen here because of its unblinking pornographic content. In fact the earliest shunga showed complete nudity, and it was only later that garments were added to conceal and reveal the body. The art, which was hand-painted for wealthy consumers and produced on wood blocks for the masses, depicts a variety of common themes: street prostitutes (referred to as “cats” or “nighthawks”), unfaithful wives, and young maids who apparently need a firm hand—or a firm something-or-other—to learn a lesson properly.

In a particularly clever display choice by the exhibit's curators, these illustrations are hung on the walls, but each wall is overlaid by a large black box. To see the works of art inside, the viewer is forced look through a small window of glass that's been cut into the box over every picture. The effect turns the museum visitor into voyeur, and he or she is given the first person perspective that the artists intended: you, the viewer, are now actively engaged in peeping, looking where you should not, catching the subjects in their most intimate and compromising positions.

Though it is often difficult to discern the sex of the painted subjects by their faces, hairstyles or kimonos, the artists were careful to render very precise—if outrageously outsized—images of their sexual organs. (And if western critics get upset by the improbable dimensions of Barbie's bust, one wonders what they'd say about the size of Kouki's cock.) Yet this magnification of genitalia is likely responsible for the accompanying depictions of all those female toes curling in pleasure.

Robin Epstein received her MFA from Columbia University. She is the co-author of the novel, Shaking Her Assets (Berkley Books), wrote The Groovy Girls series (Scholastic) and is a contributor to This American Life. Currently she is scripting video games and teaches sitcom writing at NYU.

Founded in 2001, NYT is a company with the mission to provide exposure of techno-cool, eye-popping entertainment and production from Japan to the general public in the U.S. Past events include the annual Anime Festival, which was started with the Sci Fi channel as the world's first anime premiere film festival, and the annual Music Festival, which has also been acclaimed as an one-of-kind event bringing the Japanese and U.S. music worlds together in NYC. NYT is currently holding two monthly events: GNG (Gamers Nite Groove) and MDS (Monthly Director Series), and two annual Festivals: eNerGy (@Central Park) and Tokyo Robotics, besides providing various client services.


About the Musuem of Sex

The founder and executive director of the Museum of Sex, Daniel Gluck, conceived of an institution unlike any other Ã¢â‚¬â€œ one wholly dedicated to the exploration of the history, evolution and cultural significance of human sexuality. In keeping with this mission, the museum advocates open discourse and strives to present to the public the best in current scholarship unhindered by self-censorship.

The Museum of Sex is committed to addressing a wide range of topics and material from different continents and cultures, time periods and media Ã¢â‚¬â€œ from drawings and paintings to photographs, film and video to ancient artifacts and old and new technology.

Befitting the museum's role as an educational sexual epicenter, it also provides a diverse program of events, including performances, lectures and seminars. Visitors also may visit the museum store, which offers an eclectic assortment of publications, home accents, clothing, and, of course, the best selection of sex toys available.