Three Sea Poems
By Jeffrey Alfier
Tales I Might’ve Told a Runaway at a North End Beach
I.
From a blanket spread over undulant sand,
a woman leaned up on her elbows,
glanced at clouds that suddenly cut the sun.
The shore went dark. Midday was suddenly dusk.
That night, a song sparrow broke a wing
against her bedroom window.
II.
A ten-year-old stared at the sea. His mother
told him of mutineers forced to walk the plank
beyond any visible shore. That night at their motel,
the boy saw through half-shut blinds
of another room, a black stocking slide
down a thigh. Its seam was as dark as a wound.
Letter to Tobi from Hampton Roads
Love, I’m still hunting work out here. I lodge at a seaside motel
among transients so aloof you’d think each room held a requiem,
for we speak only in see-you-laters certain to vanish with us.
Through the next window down from mine, a man stares solemnly
at the wall as if it held the Stations of the Cross.
Roses he’d sent to a woman in a far city went unanswered.
Someone pours a vase of dead flowers out a window.
A rhythm’s banged on a wall somewhere like desperate code.
Brooms chase sand out of doorways.
Some occupants are out of work. Or simply out of heart.
This is the coast their dreams held. But they abide now
as if they never arrived, a journey no dream kept the faith with.
After a woman got evicted, they found nothing left
save a cat food tin, a brush full of stray and broken hair,
and a single red dancing shoe.
On the lam, she’d hopped a Norfolk Southern,
disappearing in the railway dark. A drifter up from Raleigh
swears he saw her down a backroad picking wayside flowers.
Today I wake and step toward the sea. Trawlers are outbound
over drowsy morning waves. Tracks of sunlight break over the sea.
Beach wanderers move slowly to their own designs for the day.
A homeless man sits asleep against a dune. His face tilts down,
hands to the sides of his head, like Odysseus
blocking his ears against the music riding the wind.
Of a Morning Along the Homochitto River
I’d chatted her up in a Brookhaven pawnshop
where she put trinkets on layaway
and asked me if I had any speed.
Let me break it on down, my friends:
I too have dreamt of escape, had un-clocked
hours drenched in coke with a pick- up woman
who’d only dim to a cold silhouette
by morning, deaf to my plea to remain,
the salty musk of her on my breath —
too young and too wrong,
hips curled about me
like the tongue of a serpent.
Wish I’d been warned of the cost.
She got a chokehold on the heart
quick as addiction, but stayed a stranger,
our night tangled in her hair.
She dragged smoke through her lungs
in a hurried exit through the graceless
glint of that midsummer sunrise,
and the door she left half-open
measured me against the light.
Two Seaside Poems
By George S. Franklin
July
Half the year is already gone. Maybe I
Wasted it—I’m not sure how you tell.
The buzzards who float in the wind above Miami
Won’t be back until October. I read somewhere
They summer in Ohio, like the retirees from
New York, who used to winter on
South Beach in the residential hotels that are all
Torn down now. I used to see them sitting
Outside in those white metal chairs
That nobody bothered to steal. This was
The payoff for a lifetime of work standing
Behind a glass counter where customers
Didn’t let them forget that whatever they
Were selling wasn’t worth it. At the end of
Each day, they’d punch their timecards and take
The subway home, their ears used to the
Noise, and their eyes turned somewhere inside.
On the beach, their hotels, pastel colored, didn’t
Even face the water, but they’d watch the sun
Set over the trees and apartment buildings.
As the sky darkened, they’d stand up, one at a time,
Drift inside to television or bed, the way the buzzards
In winter will let the warm air lift and carry them
As their sharp eyes scan the causeways and parking lots,
Rooftops and twisting streets.
The Day I Invented God

I invented God in the late afternoon in October. The light came in at an angle through the pine trees, and someone was making dinner.

I invented God on a day in October, not long after my grandfather died.

My grandfather had collapsed the way they imploded the old casinos in Atlantic City: first, the sound of explosives, and then, the building crumbling in on top of itself. Where it had stood, rubble and dust, a sense of something missing, a hemorrhage.

I invented God on a day in October when I was seven or eight years old. I knew the story where he called out to Samuel in the middle of the night, and I decided he should have my grandfather’s voice. Later, I discovered I could talk as much as I liked. He would never reply, never stop me in mid-sentence to tell me I had it wrong. And, if he reprimanded, it was only my own voice, assuming what he would say if he were going to say it. Eventually, I forgot what my grandfather’s voice sounded like, and I never heard it coming from him.

That afternoon in October, I was sitting on the red brick steps outside the house, trying to remember my grandmother who’d died before I could speak and a great aunt who’d lived in New Mexico. Nobody bothered me at times like that. I got as far as remembering my great aunt’s room when she was sick, that it was green and the shades were drawn. My mother had taken me to visit when I was so young that memory and what I’d been told were mixed together.

I invented God in the late afternoon in October. The light came in at an angle through the pine trees, and someone was making dinner.

A Seaside Poem
By Richard Leise
To Be Continued
Where on Chesil Beach the blue flower
ascends home with its pale fire and
the possibility of an island—
Where the pregnant widow of our
secret history and childhood shame and the
monkeys of witness swing through
our window—
Where west of sunset and the zone of interest
the kindly ones lay their mark and
Eileen, beloved, stands on the outer dark—
Where Lolita, and the others, the beautiful and the damned,
make of the waves a sense and sensibility
not of the recognitions or even the corrections but
under the volcano capture the castle—
Where the
go-between
Where things fall apart
staying
on like perfume on the sea, the sea 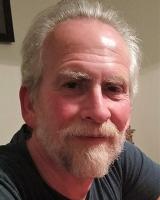 George Franklin is the author of four poetry collections: Noise of the World (Sheila-Na-Gig Editions), Traveling for No Good Reason (winner of the Sheila-Na-Gig Editions competition in 2018), a dual-language collection, Among the Ruins / Entre las ruinas (Katakana Editores), and a chapbook, Travels of the Angel of Sorrow (Blue Cedar Press).  Individual publications include: Cagibi, Into the Void, Sequestrum, Matter: A (somewhat) monthly journal of political poetry and commentary, Verse Daily, Panoply, and Pedestal.  He practices law in Miami, teaches poetry workshops in Florida prisons, and co-translated, along with the author, Ximena Gómez's Último día/Last Day (Katakana Editores).  Website: https://gsfranklin.com/

Richard Leise recently accepted The Perry Morgan Fellowship in Creative Writing and the David Scott Sutelan Memorial Scholarship from Old Dominion University.  While completing a MFA, he has a novel out on submission, and is finishing a collection of short stories.  His fiction and poetry may be found in numerous publications, and he was recently awarded Pushcart Prize and Best Small Fictions nominations.