On my 40th birthday, a year ago my phone flashed with a notification. 'Your long ago first love commented on your photo.’ “Very glad the Roma didn’t drop you and/or your dad caught you off that bridge back before this pic even occurred.” (He uses the right nomenclature, Roma and not the insensitive slang of gypsies.) And I’m flattered.

Everyone who knows me remembers this story. How could you not? You were held over a bridge when you were a child. It’s a remarkable story, but since I survived it, it’s become just that. A great story.

The story goes like this. It’s better if my father tells it.

“I wanted to paint the Ponte Vecchio and Karen wanted to look for a doll for you and do some shopping so I got us all set up on the bridge across from the Ponte Vecchio. I had put my camera down and had my paint all set up and you had your paints. And it was a bit cold, so you were wearing a red hooded sweatshirt. And we were happy and it was a gorgeous sunny day. When all of a sudden a group of gypsies came up and grabbed Augie and held her over the bridge, and said, ‘Bambino or wallet.’ And I had just cashed all our travelers checks that morning, so I had all our cash and Karen was shopping.”

“Luckily I had all my change in my pockets and I just took out all the change and gave it to them. And I didn’t know what any of that was worth, I kept my change in my right pocket and my knife in my left. So I just gave it to her, there were three women and two men, all dressed in unusual clothing. I’ll never forget it. When just then a tour bus pulled up and a crowd of people got off the bus, so they all looked at each other and said, ‘let’s get out of here,’ so the guy who was holding you dropped you and I reached over and grabbed you by the hood of your red sweatshirt, and pulled you back in.”

“I sat Augie down by the bridge and she looked at me and said, ‘Dad, we’ve been robbed!’”

My father the hero. Me being completely unfazed by this experience. Thinking it was cool. I don’t remember being held over a bridge (if indeed I was) I remember the aftermath of it being exciting. The image in my mind that develops if I seek the depths of memory appears as if a daguerreotype with the edges blurred like a modern day vignette.

Even as a mother I can’t imagine being in the place of my father it’s too horrifying but also the story for me is my father the hero so even envisioning myself in his place means that I would be the hero too. That’s what the story is.

And I know that it gives me some caché as an artist, as a writer. Though I’m not totally sure why. Things have happened to me. I have a story to tell.

My father will say, “I was getting ready to go swimming.”

I don’t remember being afraid, perhaps I didn’t understand what was going on till it was over. I don’t remember thinking much of anything about it except that we had been robbed by gypsies!

Gypsies were exotic, mystical, magical. They conjured images of long skirts and paisley patterned headscarves. A bit like witches, with otherworldly powers. My girlfriends and I dressed up as gypsies when we were eleven, our last gasp of a kids halloween, of trick or treating by ourselves and actually genuinely asking for candy.

The gypsy was the black and white Oz disguised with a crystal ball, a caravan.

Years later, there will be live gypsies in the form of fourteen year old girls with long skirts pickpocketing the metros of Paris. They will pretend to find a ring on the ground and ask if it’s yours distracting you while the other friend steals your things. But we don’t call them gypsies even though they’re still wearing the stereotypical long skirts.

My friend Amo was so affected by this story of the gypsies. It became a cocktail party story that he’d ask me to recount often. He had a way of making me feel like I was the only person in the room when he’d say,

“Have you heard the Baby Aug Gypsy story?”

Or “Gypsies grabbed a baby Aug from her parents arms and held her over a bridge until they paid to get her back. Sort of one of the best Aug stories there is.”

At twelve, he might’ve been a boy I’d have an eternal crush on who would seem eternally out of my league, and later my best friend would date him and he would be eternally off limits, except for an opportune Dylan concert years later in New York, we would never go beyond that kiss. But it’s the gypsy story that made us become friends. And thirty-eight years later from the day I told it to him, he’s still telling it.

This story of the gypsies on the Ponte Vecchio would weave into my own history repeatedly. Not only in my father’s telling but also my own. But it was my unabashedness in telling the story in 7th grade that earned me these cool points from this boy, that never forgot the story.

We are in our first period history class with Richard, our stout red-haired teacher who speaks with an impassioned British accent and loves rugby. Later he will teach us the rules of the game and we will watch some matches on a small television set strapped to a cart and wheeled in for exactly that purpose. But not today. That will come in Spring for fun. As a reward for our school year. Today it is Fall, school has just begun. We are just all getting to know each other. We are all new. Just quite twelve in 1992. The classroom is small with individual desks attached to plastic chairs facing the chalkboard.

It is Shelley, who will soon become known as the smartest girl in the school, who uses the word.

Is she talking about a book?

“The Jews gyped the Romans.”

Our teacher stops the class. “Do you know where that word comes from?”

No one raises their hand. No one says a word.

“We don’t use that word because it is derogatory to the gypsies to the people of Romania. To the Roms.”

“Because it connotes that they are thieves.”

I raise my hand, “But I was actually robbed by gypsies when I was four.”

Looking back thirty years later it’s very impressive that our teacher stopped the class to explain that gyped was a bad word. And that not all gypsies are thieves. We all remembered this lesson, why we should never use this word. And aside from this essay, I never have. 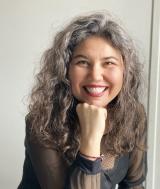 Augustine Blaisdell is the author of WOMEN À LA MODE: A Memoir of Writing a Book about Feminists in Paris. Originally from Los Angeles, California, she earned her MFA in Creative Writing from Columbia University and her BFA in Writing, Literature and Publishing from Emerson College. She leads an online International Literary Salon as well as teaches in person classes in the South of France. She is currently at work on an essay collection entitled, FINDING PHILOGYNY: Uncovering the Antonym and the Antidote to Misogyny. You can find more of her work on augustineblaisdell.com and on Instagram @augustineblaze